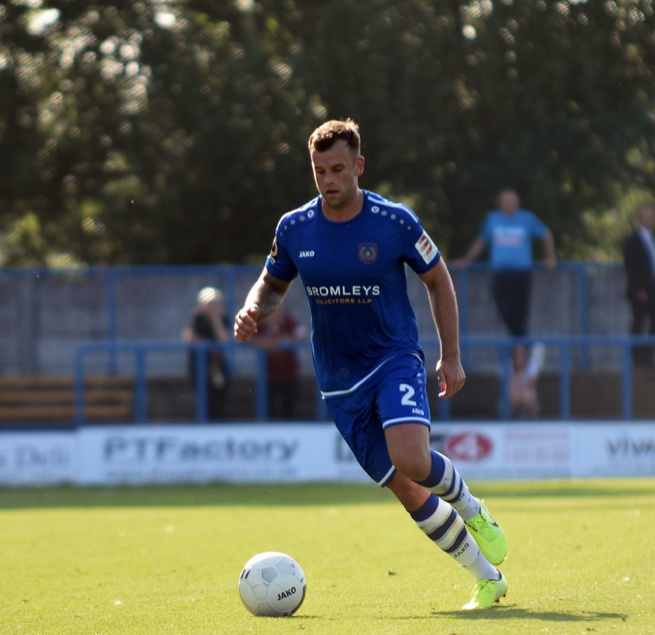 Callum Saunders scored for the second time in as many days to earn Curzon Ashton a point at home to Spennymoor Town.

Both teams played some good football at times on a spectacularly sunny bank holiday Monday, but it’s Spennymoor who will feel slightly aggrieved at not taking all three points after having the better chances and taking the lead through Glen Taylor’s second half strike.

The improvement in Curzon’s strength in depth, though, has been noticeable this season and it was two substitutes who combined for the equaliser when Jack Banister set up Saunders with their first two contributions to the game.

Having lost this fixture 5-0 on the final day of last season, the result is an indication of the progress made by Mark Bradshaw’s side over the summer.

The Nash knew a reaction was needed after consecutive defeats and following the disastrous trip to King’s Lynn two days earlier. Bradshaw made four changes to the side that started that game; Luke Wall, Isaac Sinclair and Michael Elstone all earned recalls while Danny Shaw made his first appearance of the season replacing Mo Ali, who is unavailable for the next few games after being called up to represent Somalia in their World Cup qualifiers.

And it was Taylor who threatened first with an audacious effort from near the halfway line which had Cam Mason scrambling back towards his goal, and had it been on target the Nash number one would have been well beaten. Thankfully, the ball dropped just wide.

The best chance of the half again fell to Taylor, this time from a much closer distance as the ball broke kindly to him eight yards from goal where, unmarked, he sliced his shot well wide.

The chances continued to come for the visitors with Mason saving well from Robert Ramshaw and then making a brilliant block from Gavin Cogdon, who had taken advantage of some miscommunication in the home defence.

Curzon had played some neat football in the first half but lacked that killer touch in the final third and it took until the 48th minutes for them to register a shot at goal, and it wasn’t a particularly threatening one as Elstone volleyed over from distance.

Mason came to the Nash’s rescue again six minutes into the half and this time with a save of the season contender when Cogdon broke away down the right wing and found Dan Ward with a cutback. His effort looked to be heading for the top corner until Mason, with his momentum taking him in the opposite direction, contorted his body and reached out his right arm to tip the ball onto the crossbar.

Spennymoor’s pressure did eventually pay off 20 minutes from time with Mason helpless on this occasion as Taylor’s shot took a huge deflection off Olly Thornley and looped into the net.

Curzon reacted by introducing Banister and weekend goalscorer Saunders and their impact was immediate.

Thornley spread a fantastic cross-field pass to Banister on the right wing and his exquisite first touch took him past Spennymoor left back Stephen Brogan and to the byline. His low cross found the onrushing Saunders and the finish was a simple one as he tapped into the net with Curzon’s first shot on target.

Both sides pushed but couldn’t find a winner in an open final ten minutes with Curzon left satisfied with a point and an improved performance.

Picture by @Biddleofnowhere (Andy Halls has eyes for the ball)