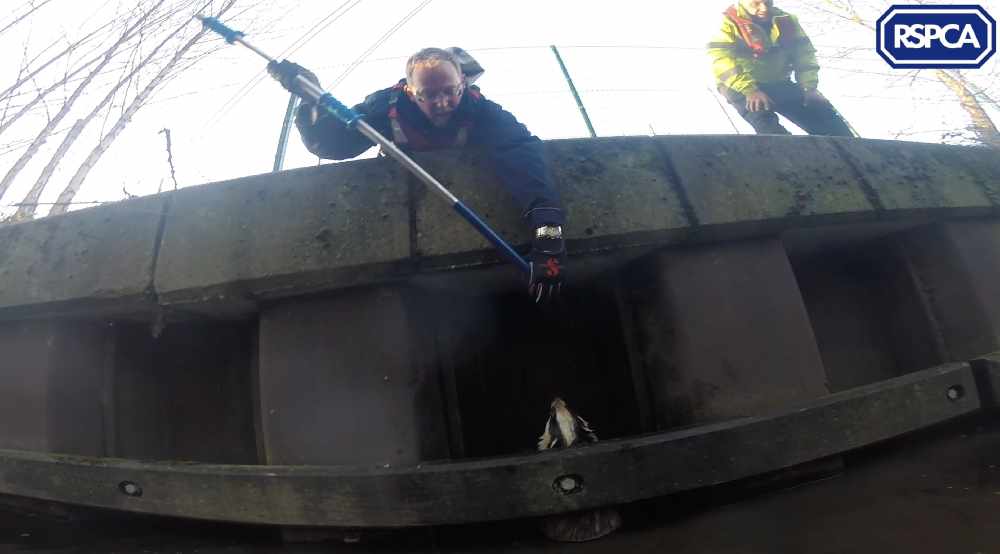 The badger, that got stuck on a beam over a stretch of canal in Stalybridge, was released unharmed following his ordeal.

The incident happened on New Year’s Eve morning after a member of the public spotted the distressed badger which was stuck on a beam about two-foot above the Huddersfield canal in Grove Road, Stalybridge.

The RSPCA’s water rescue team were sent to the scene to help rescue the stricken badger along with members of the Canal and River Trust.

The RSPCA’s Animal Welfare Officer (AWO) David Cottingham tried to capture the badger from the side of the canal but he could not reach the animal - which then jumped into the canal.

But AWO Steve Wickham had already made his way down to the area in a water rescue boat and was able to pursue the badger in the canal. He captured him with a specialist pole before lifting him to safety on the bankside.

Steve said: “We were concerned for the badger as we were not sure if he was injured and there was no way he could get out to safety. We were also worried because it was very cold.

“I think he must have gone towards the canal and fallen down but managed to get his feet on a chain leading into the water and was then stuck on a ledge.

“Badgers can swim but the sides of the canal are so high he would have been unable to get out without our assistance.

“It was a great team effort and I am pleased to say the badger was checked over at the side of the canal and found to have no injuries so we were able to release him back into the wild safely.”

For more information about what to do if you find a wild animal in need of help, please visit the RSPCA website at: www.rspca.org.uk/adviceandwelfare/wildlife/injuredanimals