Revealed: How many council staff in Greater Manchester are being paid £100k annually 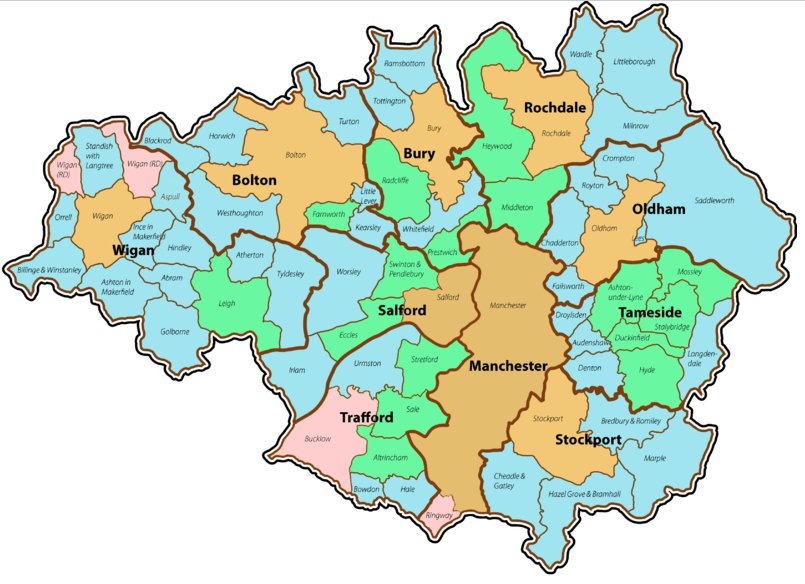 A total of 97 members of council staff across Greater Manchester's 10 boroughs are being paid more than £100,000 a year.

Campaigners The Tax Payers’ Alliance, who are pushing for a low-tax society, has released its annual ‘Town Hall Rich List’ for the 2019-20 financial year – although councils more often than not also list their staff’s pay on their websites.

In the list, all of the staff within Greater Manchester’s 10 borough councils who are paid a substantial wage from public money are listed.

Funded by the tax payer, each staff member (some named, some not) has their basic salary listed, as well as their expenses claims for the last financial year and any pension contributions.

Then, their total take-home pay before tax with all of these elements added together, known as total renumeration, is shown.

The council with the highest number of staff paid more than £100,000 in the last financial year is the city-region’s largest, Manchester, which has 16 staff members on more than that amount.

The highest paid member of staff at Manchester council, the chief executive, earned £241,628 in total renumeration for the financial year of 2019-20, including £38,750 in pension contributions.

A spokesperson for the council said: “Manchester is one of the largest councils in the UK and the city represents the largest engine of economic growth outside of London.

“The rate of pay of our senior officers is commensurate with similar sized councils in the UK and their remuneration is consistent with their level of skill, expertise and level of responsibility. As would be expected of any responsible employer.

“The council’s staff structure and the amount all staff are paid is constantly monitored to ensure that it is both appropriate and delivers the results the city needs.

“The council is also wholly transparent about senior officer pay and these figures are published on the council’s website.”

Lisa Selby, assistant director for human resources and organisational development at Wigan council said: “Wigan council is the second largest council in Greater Manchester and takes responsibility for hundreds of services which run every day for our residents.

“As part of our determination to provide value for money, we continuously review our management structure and work closely with our partners to combine roles where possible or seek opportunities to share responsibilities to deliver outcomes for our residents.

“Our focus remains on delivering value for money and the best outcomes for residents, communities and our borough.”

The Tax Payers’ Alliance also named a managing director at the authority who was also thought to be earning more than £100,000 a year, but a council spokesperson said they ‘did not recognise’ this role within their staff.

A spokesman for Rochdale council said: “Details of our senior management pay is published in our annual pay policy statement. Grades of all senior posts are subject to regular review and bench-marking to ensure value for money and competitiveness.

“These senior posts carry significant statutory responsibility and that is reflected in the salaries paid by councils across the UK.  Our residents quite rightly expect value for money but they also expect us to recruit and retain suitably qualified and experienced staff to these vital roles.

“We have also increased our local living wage so hundreds of our lowest paid staff have received another pay rise – above the government’s national living wage rate.”

Stockport and Oldham councils also have 10 members of staff who earned £100,000 in total renumeration over the 2019-20 financial year.

In Stockport, the highest earner, the council’s chief executive received £178,135, including pension contributions.

For Oldham, the council’s chief executive earned £215,000 in total renumeration.

Bury and Bolton councils each had nine members of staff earning a total renumeration of over £100,000 in the 2019-20 financial year.

For Bury, the authority’s chief executive and accountable officer for Bury’s NHS Clinical Commissioning Group received £227,000 in total, including £14,000 worth of expenses.

In Bolton, the chief executive earned £180,423, excluding pension and expenses.

Trafford comes next with eight members of staff earning more than £100,000 – including its chief executive who was paid £199,287 in total renumeration.

A spokesperson for Trafford council said: “Our senior management roles are regularly evaluated and benchmarked with comparable roles at other local authorities so that they remain fair and competitive to allow us to attract the best candidates to help us deliver the best services for our residents and businesses. We also publish details of these salaries  on our website every year.”

Salford council has the lowest number of staff members earning over £100,000 per annum – with just four.

The authority’s chief executive earned £204,748 in total renumeration, including £30,825 in pension contributions.

John O’Connell, chief executive of the TaxPayers’ Alliance, said: “Taxpayers facing huge and hated council tax rises want to know they are getting value for money from their local authority leadership.

“At the onset of the coronavirus crisis, thousands of town hall officials were taking home huge sums. While councils were plunged into tackling the pandemic, many staff will have more than earned their keep, but households have nevertheless struggled with enormous and unpopular council tax rises.

“These figures shine a light on the town hall bosses who’ve got it right, and will enable residents to hold those who aren’t delivering value for money to account.”