Public urged to hand in firearms during two-week surrender 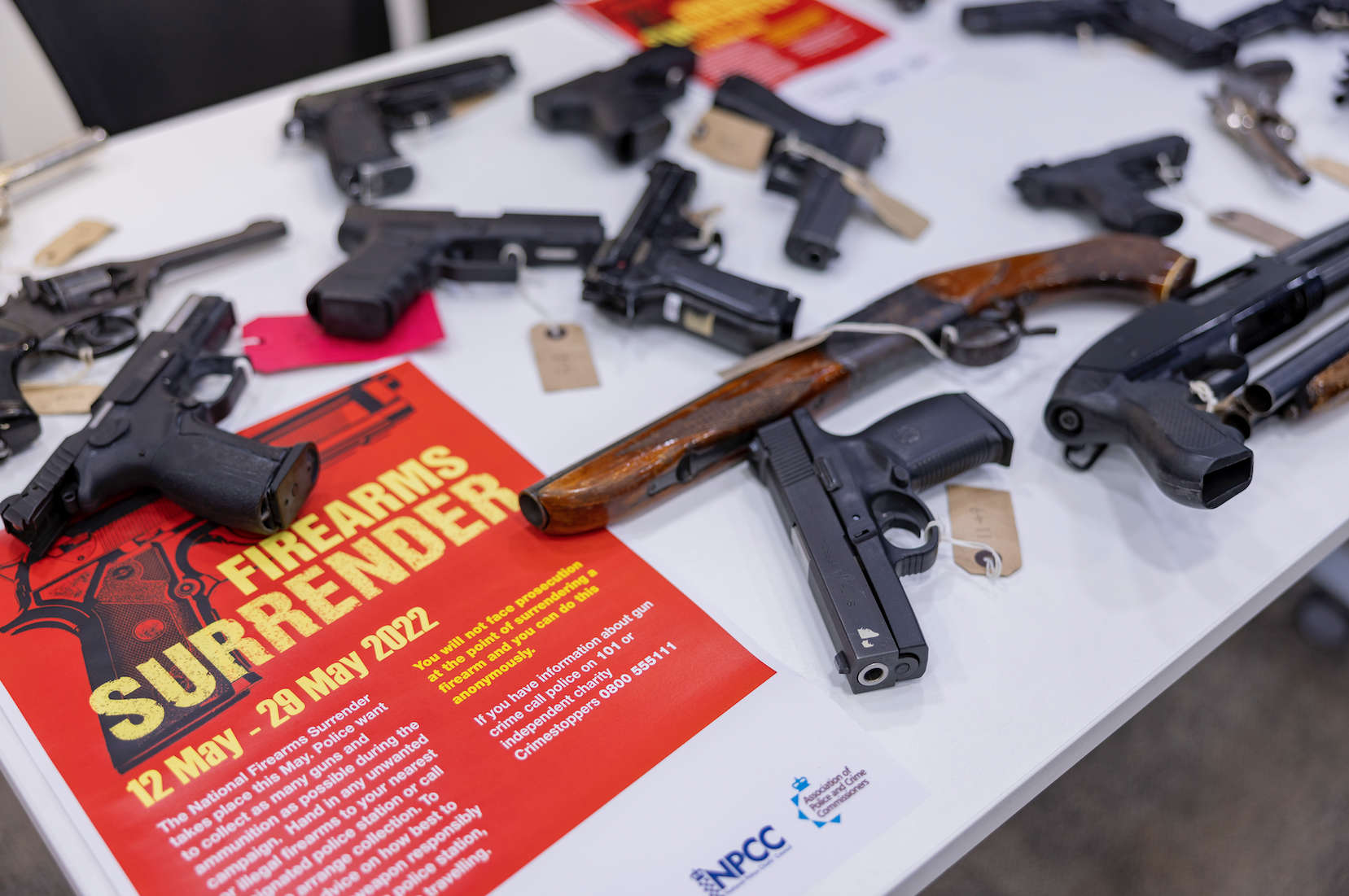 Greater Manchester Police is urging people to hand over their firearms during a two-week long surrender of firearms and ammunition.

The National Firearm Surrender campaign, co-ordinated by the National Ballistics Intelligence Service (NABIS) will start on 12 May and run until 29 May and includes every police force in the UK as part of a crackdown on reducing violent crime and ridding lethal weapons from the streets.

Firearms legislation is regularly updated and officers from GMP are urging people to surrender unlawfully held or unwanted guns and ammunition to help avoid them getting into the wrong hands.

This surrender is not just targeting those involved in criminal behaviour, it’s also aimed at collectors, licence holders and anyone who has inherited a firearm. Many firearms may be held in innocence and ignorance of their illegality or may be forgotten in people’s homes.

Legislation around firearms is regularly updated and changed and members of the public are advised of the risk of having firearms which could end up being illegal. It is the responsibility of the owner to ensure that they meet the relevant ownership requirements.

Just over 580 firearms have been handed in as a result of previous Firearm Surrenders.

Handing in unwanted, unlicensed and illegal weapons avoids the risk of them becoming involved in criminality and means that members of communities can dispose of firearms in a safe place through the annual surrender. Illegal possession of a firearm can result in a sentence of up to five years in prison and anyone found guilty of possession with intent to supply could be sentenced to life in prison.

Superintendent John Griffiths, of GMP’s Serious Crime Division, said: “We are absolutely committed to robustly investigating serious crime, specifically targeting those in possession or transferring firearms as they pose a real, serious threat to not only the Greater Manchester region, but all across the UK.

“Detectives across the force and those within our serious crime division investigate those involved in firearms on a daily basis and a 30% drop in discharges over the last 12 months across the region is a testament of this – but there’s still work to do be done and we’re determined to rid these lethal weapons from our streets.

“This firearm surrender gives those with firearms and ammunition an opportunity to hand them in. Anyone who may have a firearm in their house that may have been inherited, or found, or is being kept for someone else, is urged to hand it to us and free themselves of the burden.

“Criminals who are in possession of firearms or ammunition are urged to hand their items over – this surrender is an opportunity to make the streets safer and if those involved in criminality don’t wish to hand the items over – it’s only a matter of time before we find them ourselves and bring you to justice.”

Superintendent Griffiths added: “Lawful gun license-holders are also encouraged to use the surrender for weapons they no longer have any use for, or even those who have inherited items from grandparents who have passed – this is the time to hand those items in.

“A number of legislative changes have taken place and people may not be aware that an inherited firearm or once legally owned firearm are now illegal. Anyone in possession of a firearm should check the legal status of their items by visiting www.nabis.police.uk.

“Every firearm surrendered is one less that criminals can potentially access and use to cause damage and harm in communities and I would urge people to hand them in at any GMP station.

“Communities really hold the key to helping reduce crime and providing us with information that may assist with our on-going investigations. Members of the public who may know of anyone involved in illegal firearms activity is asked to report it online or via LiveChat at www.gmp.police.uk, call 101 or report it anonymously to Crimestoppers on 0800 555 111.”

Firearms can be handed in to 11 different police stations across the region - including Barn Street in Oldham and Manchester Road in Ashton from 8am to 6pm on weekdays and 10am to 6pm at weekends.