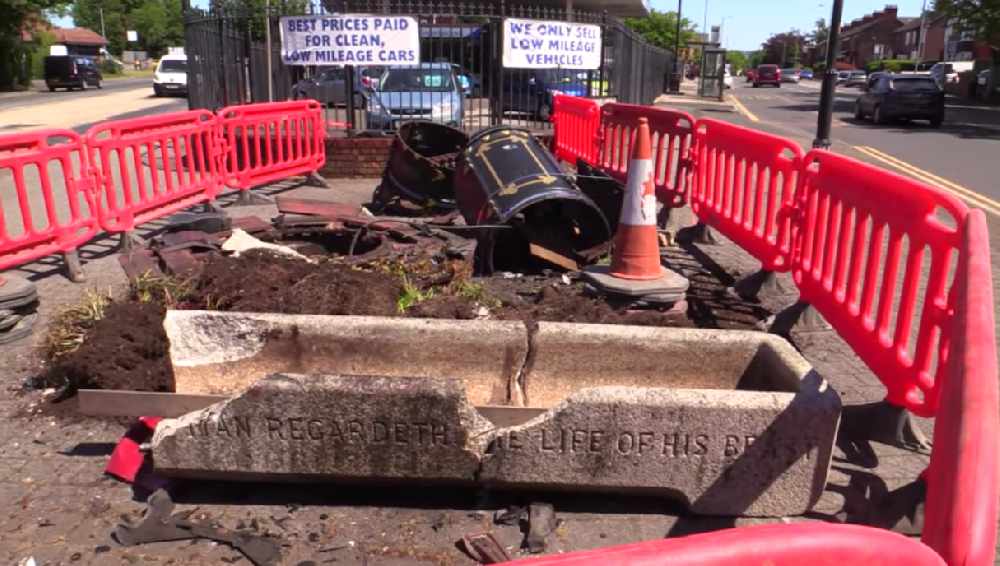 Tameside Council is in the process of seeking consent to repair and reinstate two historic landmarks in Audenshaw, which were destroyed after a suspected drink-driver ploughed into them.

A 34-year-old man was arrested on suspicion of drink driving after a BMW 330 crashed into what's known locally as the Trough and the pillar box transformer.

The Grade II monuments were erected at the junction of Manchester Road and Audenshaw Road, at a time when both cattle and horses were still regular uses of public highways during the 19th century.

Local residents were left "absolutely devastated" by the incident, describing it at the time as "a disaster", and local councillors said they were "distraught".

After being immediately contacted by kind-hearted locals offering to fundraise to repair the landmarks, Audenshaw councillor and Tameside Council's Executive Member for Finance and Economic Growth, Oliver Ryan, confirmed that the council would pay to repair them as the owner of the monuments.

Denton MP Andrew Gwynne, who serves the Audenshaw area, got in touch with the council about the restoration of both historical listed features and has provided an update.

The council said in a statement to Mr Gwynne that it is in the process of acquiring listed building consent to repair and reinstate the structures and is waiting to find out if a formal quote for the works needs to be submitted to Historic England, but aims to preserve the monuments' historic value. It will also seek to find the driver responsible so they can foot the repair bill.

The authority said: "We have cleared the site because both the structures are listed. The damaged apparatus presented a health and safety risk and its removal was required for the preservation of the structures. This is important having regards to the requirements of Section 9(3) of the Planning (Listed Buildings and Conservation Areas) Act 1990.

"We are now in the process of gaining listed building consent for the repair and reinstatement of the structures. An application to our colleagues in Planning will be submitted shortly.

"This is quite straightforward and will require the completion of the application form, a site location plan, and plans/photos and statements explaining and illustrating exactly how the structure would be repaired and reinstalled on site. Clearly, at the heart of the considerations is ensuring that the historic value (significance) of the “building” is preserved as far as possible.

"We are keeping a full photographic record and the structure is securely stored until such a time as listed building consent is obtained for its repair and reinstallation etc. We have requested a number of quotes to assess a feel of the repair costs, a more formal quotation process may be required (3 quotes for each structure). It might be that we need to flag this matter with Historic England. Planning will advise us on this. We have also applied to the DVLA and the police for the driver details with a view to recover all the costs from them."

The damage done to The Trough and the pillar box transformer back in May.