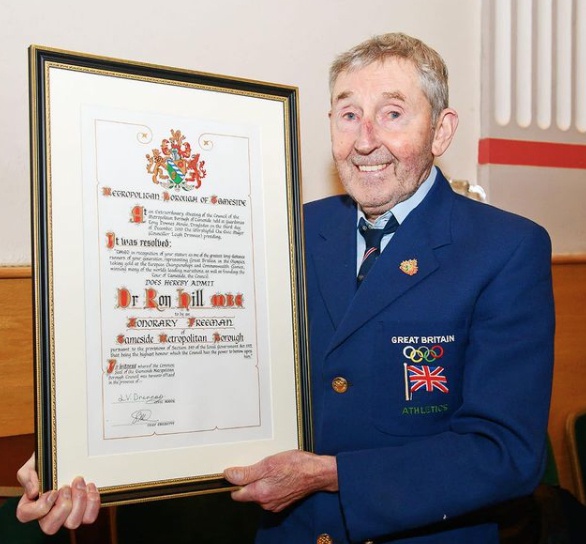 Dr Ron Hill MBE was granted the freedom of the borough in Tameside in December 2019.

Talks are taking place to create a lasting memorial in Tameside in celebration of the achievements of a local sporting legend.

Dr Ron Hill MBE, from Hyde, came to national prominence when he represented Britain in the 10,000 metres at the 1964 Tokyo Olympics and went on to become one of distance running’s all-time greats.

Using his doctorate in textile chemistry, he founded Ron Hill Sports in 1970, pioneering revolutionary lightweight kit. The brand was so successful that it became synonymous with running.

In 1981, Dr Hill launched the Tour of Tameside, which has been billed as the toughest challenge in British athletics.

The Ron Hill 7, which concludes this year’s Tour on Sunday 19 June, will be followed by a pie-and-pint event at Hyde Town Hall (the start and finishing point for the stage) in his memory which will feature an exhibition of memorabilia.

Dr Hill held a host of world records and won several overseas marathons including Boston in 1970 when he shattered the course record by three minutes. He had raced in 100 countries before his 70th birthday.

To mark the anniversary of Dr Hill's death, Tameside Council has confirmed that discussions are under way with his family to create a lasting memorial to an honorary freeman of Tameside who achieved so much on the international stage as an athlete and entrepreneur.

Steven Pleasant, chief executive of Tameside Council, said: “Ron, who lived in Hyde for most of his life, brought great credit to the town and to Tameside as a world-class athlete and businessman. Almost a year after his death he is still greatly missed

“The Tour of Tameside and his sporting record will always be his greatest memorial. However, we feel it is only right that a person of his stature should have some sort of lasting tribute in the borough.

“We are speaking to his family to settle on something fitting for the well-loved, exceptional man he was.”