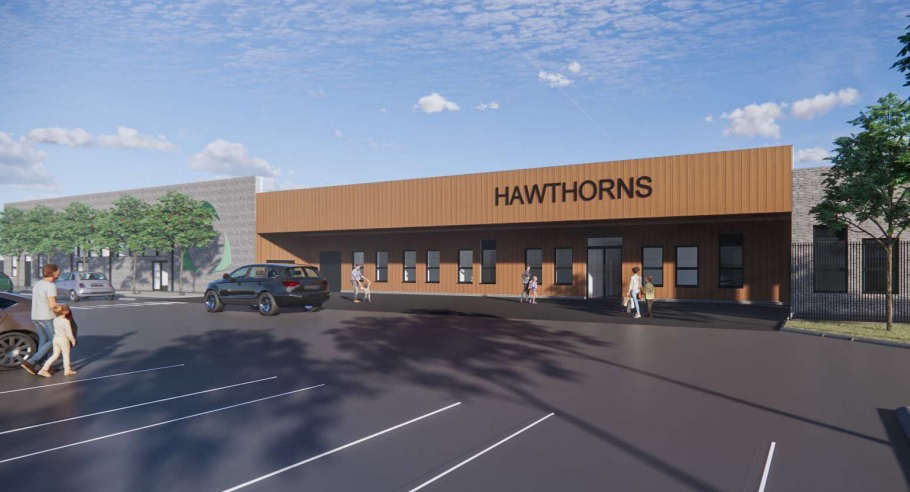 The plans for the new Hawthorns School. Photo: JMA Architects.

Plans to build a £13 million school for more than 200 children with special needs have been lodged.

Tameside Council has applied to relocate Hawthorns School into a new building at the site of Longdendale Playing Field, in Mottram in Longdendale.

Hawthorns School is a primary age special school currently located on Lumb Lane in Audenshaw which shares a site with Aldwyn Primary school. It caters for pupils with a range of ‘complex’ special educational needs.

Hawthorns currently provides for 133 pupils across its existing building, as well as a teacher training cabin and additional modular units – but according to the planning statement the original school building only has capacity of up to 75 pupils.

The cost of expanding and relocating the school is budgeted at £13m which will come from the council’s basic needs funding. The project was approved by the cabinet in June last year.

Bosses want to open the new building, which will accommodate 220 places, by September 2023.

A council report stated that there has been a ‘significant increase’ in children requiring specialist provision over recent years.

A cheaper option to split the school across two sites had been considered as an alternative, but would mean a distance of eight miles driving distance between the facilities and additional running costs.

The option to build on Longdendale Playing Field, located between the A57 and John Kennedy Road, was deemed the most suitable.

Under the plans the school will single-storey and will provide teaching facilities for students with complex social communication needs, including children with severe autism.

“The single storey allows for the building to remain at a non imposing and overpowering scale for the pupils, creating a sense of a community feel and child friendly environment,” the design and access report states.

“The scheme would deliver a new school for up to 220 pupils with special educational needs or disabilities.

“It would replace the existing Hawthorns school which does not have the capacity to meet current or future needs.”

The planning documents state that lunchtime and assembly groups will be split into groups, with lunch being served in the small hall to pupils that need a quiet environment.

The application will also result in the delivery of a full sized grass playing pitch and a 9v9 artificial surface playing pitch.

“Both will be fully laid out and maintained and available for access to the local community,” the report adds.

“It is acknowledged that there will be a loss of some protected open space as a result of the proposals. However, the continued use of large parts of the site for sports and recreation outweighs this loss.

“As such, the proposal development meets the necessary policy tests in terms of the loss of protected open space.”

The existing leisure centre and external playground to the east of the site will be retained, to be managed and run independent from the school.

A decision is expected to be made by the planning authority in October.