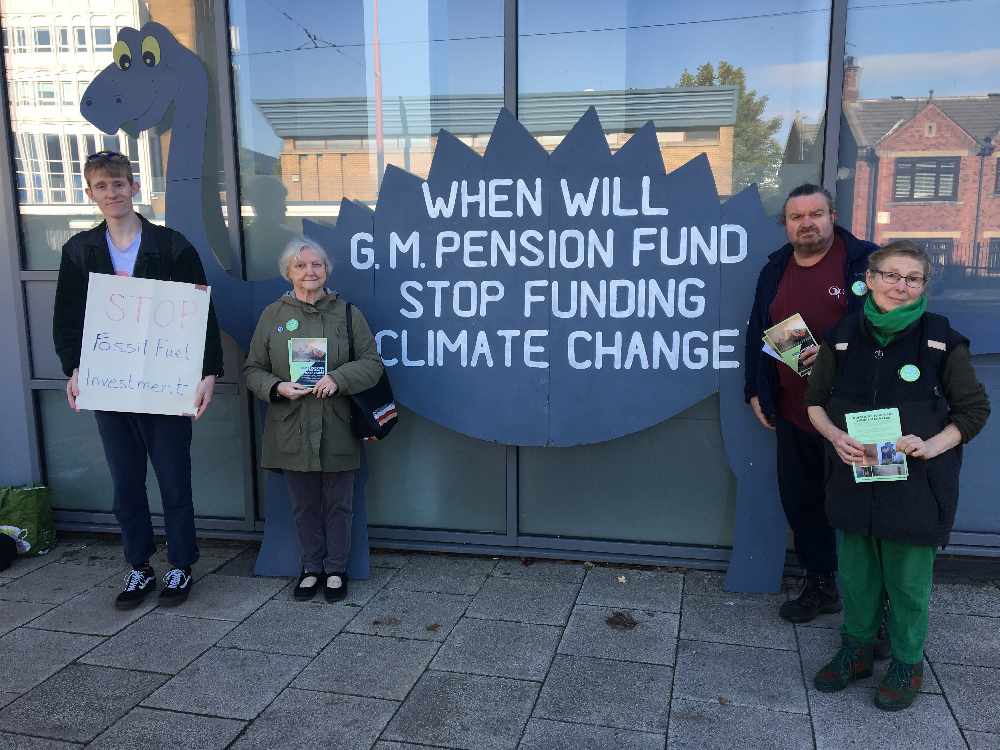 The Greater Manchester Pension Fund has been criticised for its 'woeful' response to calls to divest from fossil fuel firms and align itself with local climate change policies.

GMPF, the largest local government pension scheme in the UK, invests more than £1bn in oil and gas stocks each year, a strategy which has proven controversial amongst environmental campaigners.

However the fund says it is also the largest investor in renewable energy and energy efficiency with £500m tied up in the industry, including large stakes in biomass.

Councillor Brenda Warrington, leader of Tameside council and chair of the GMPF, insists that it will continue to encourage companies to become carbon neutral instead of withdrawing investments.

Last year it was revealed that the fund has suffered a £375m loss after investments in oil and gas companies crashed in value in the last three years.

This is around 2.2 per cent of the total value of the fund or equivalent to a £1,000 loss per pension member, according to analysis commissioned by Platform London.

With Greater Manchester declaring a climate emergency in 2019, the city-region is working towards becoming ‘zero carbon’ by 2038.

Tameside council, which runs the GMPF, is now coming under the pressure of neighbouring authorities to move the fund’s interests in line with the regional ambitions to tackle climate change.

Last year Manchester council sent two letters to the GMPF urging it to set out its actions to divest from investment in fossil fuels, but has yet to receive a formal response.

Councillor Richard Kilpatrick told the council’s environment and scrutiny committee on February 10: “The response has been woeful. For a local authority who is a principal authority in Greater Manchester, it’s absolutely shocking.”

Each of Greater Manchester’s councils have an elected representative on the fund’s management panel to have a clear line of sight and vote to determine the fund’s approach.

The meeting heard that other local authority pension funds in the UK, such as South Yorkshire, Southwark and Clyde, have made similar commitments, or have announced ways they intend to divest from fossil fuel companies.

Coun Stogia said: “[GMPF’s] approach is to be an ethical investor strongly encouraging such companies to move towards a low carbon solution.

“I’m sat there with my colleagues thinking why the pension fund is not upping their ambitions to match the wider city-region.

“I’m giving you the reassurance that Councillor Paul Andrews [Manchester’s representative on the GMPF management panel] will be like a dog with a bone.

“We are not going to let them get away without giving answers and reasons why they can’t [divest] or make this commitment to the residents of Greater Manchester.”

The GMPF said there had been a ‘clear misunderstanding’ around the fund’s statutory duty and that the scrutiny committee has ‘no jurisdiction’ in relation to its decision-making.

A spokesperson said the fund has divested £2.5bn to develop a ‘low carbon approach targeting a significant reduction in carbon footprint and intensity’, a move which has won recognition from the House of Commons environmental audit committee.

Councillor Brenda Warrington said the fund was committed to investing pension assets ‘to create a sustainable, better future without compromising on returns’.

This includes encouraging fossil companies to ‘clean up their act and become carbon neutral’ and to align themselves with the Paris Agreement on climate change.

Coun Warrington, who said last year that she was ‘tired of all the constant attacks from environmental warriors’, said: “The fund is working hard to achieve carbon neutral status as quickly as possible.

“But it will not jeopardise the hard earned pensions of our workers and pensioners, or importantly increase the costs for hardworking taxpayers of Greater Manchester.

“The fund will not immediately divest and pass the buck to someone else. We want an orderly and just transition that is fair for communities and workers.

“The fund will not shirk from its leadership role and disinvest, allowing others who do not care about the environment to own those shares instead and fail future generations to come.

“Our holdings are 25 per cent less carbon intensive than the market, or the average pension fund investor, so we are moving in the right direction to become carbon neutral."

Campaigners outside GMPF HQ, at Guardsman Tony Downes House in Droylsden, back in the summer of 2019 at an anti Fossil Fuel protest. Credit: Fossil Free Greater Manchester.