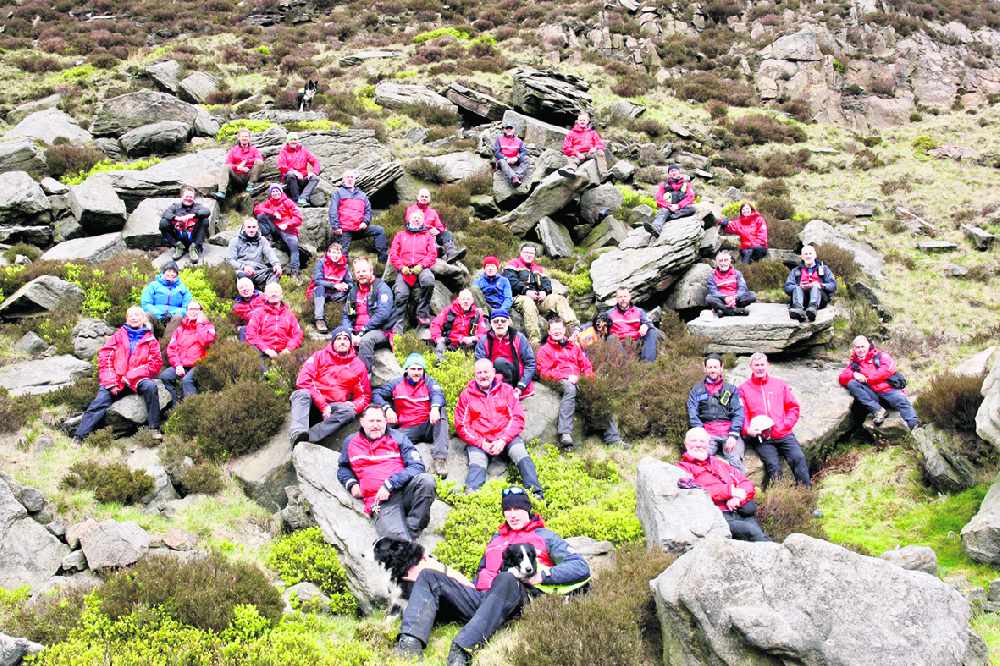 The heroes of the hills have been presented with the most distinguished accolade a voluntary group can receive in the UK.

The Oldham Mountain Rescue Team have received The Queen’s Award for Voluntary Service at a glittering ceremony at Gorton Monastery.

The team were recognised by their primary role to help injured or distressed people in remote and difficult-to-access locations, but their expert skills are often needed to assist the local community.

Severe weather events, such as snow or flood, and major incidents like last year’s devastating moorland fires are just some examples where the volunteers are on the front line.

The team  received  the award from Warren J Smith Esq JP, Lord Lieutenant of Greater Manchester, at a ceremony attended by the Mayor of Oldham, Cllr Ginny Alexander and her husband, Adrian, her consort.

OMRT’s proud leader Rob Tortoishell, from Mossley said: “I’m over the moon OMRT has been recognised with this award.

“It is testament to the hard work and commitment shown by team members not only on callouts but in training and fundraising as well.”

He added: “We couldn’t survive without the support of our families and of the local community - this is a big thank you to them too.”

Mick Nield, MBE, the team’s chairman, said: “It’s  great to get the recognition. This is not just for the current members but also all those who have built the foundation of our team over the past 55 years and for the support of our families.”

Dr Andrew Taylor, the team’s medical doctor said: “As a team of 50 volunteers we are proud and delighted to receive this award in respect of service gladly given.

“In receiving it we are always aware of the contribution and sacrifices of hundreds of  members over the 55 years of OMRT and especially of the partners and families of all those members past and present for their support, their missed meals and celebrations as callouts took priority.”

The team’s longest serving member Peter Hyde, 79, said: “Simply being nominated for this award in the first place is amazing but actually getting it is almost beyond words - but I will stick with ‘fantastic.’

“As a team we often get to know directly from the people we help that what we do is truly appreciated.

“I see this award as recognition and appreciation from the wider community. I also believe it reflects back on the individuals, businesses and local communities who support us in so many ways. I hope they feel as proud of the team as I do.”

The Queen’s Award for Voluntary Service aims to recognise outstanding work by volunteer groups to benefit their local communities. It was created in 2002 to celebrate the Queen’s Golden Jubilee.

Winners are announced each year on June 2 – the anniversary of the Queen’s Coronation.