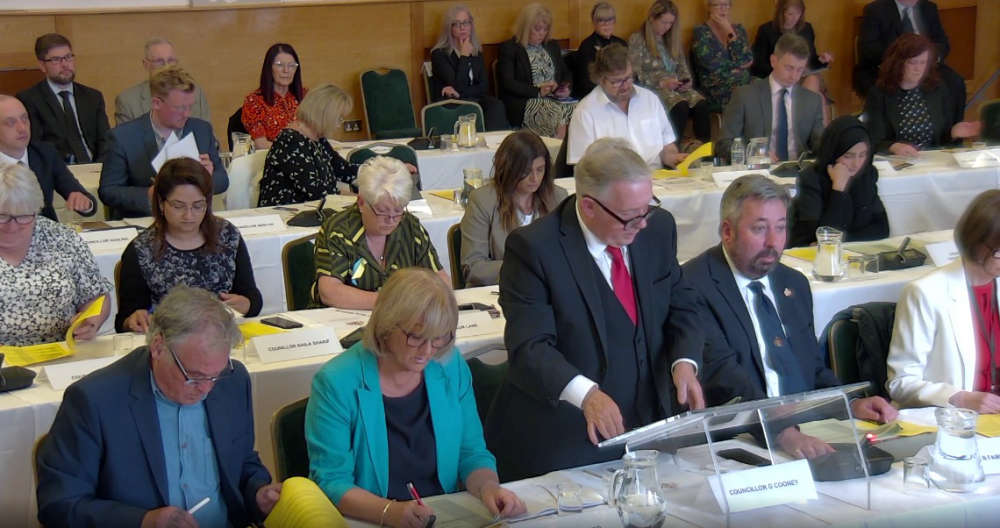 Councillors in Tameside have officially appointed their new leader who has pledged to open up the decision-making process to give residents a 'voice'.

At the annual mayor making meeting on Tuesday night, Droylsden West councillor Ged Cooney was voted in as executive leader, along with a number of new cabinet members.

Coun Cooney becomes only the authority’s fourth leader in 42 years. He takes over from the borough’s first female leader, Coun Brenda Warrington following what she described as a ‘hostile challenge’ for the leadership.

Coun Warrington resigned after holding the top post for four years, after being voted in following the death of Kieran Quinn in 2018.

She was seated in the back benches of the chamber next to Denton ward colleagues during Tuesday night’s meeting.

In his first speech at the meeting of the full council, Coun Cooney thanked members for having the ‘confidence and the faith’ to vote him in as leader, which he said was an ‘honour and a privilege’.

He also praised the work of his predecessor Coun Warrington, whom he said steered Tameside through ‘unprecedented times’.

“After we move into a period of new leadership, our focus must be on building on the good work of the last four years with new ideas to tackle new challenges,” Coun Cooney added.

“I and my new cabinet will outline over the coming weeks and months our plans to reinvigorate the economy and the communities of Tameside.”

The new leader highlighted four key areas which he said should be priorities for action.

These include town centres, major projects, clean and safe streets and listening to the voices of residents.

“We will build on each town centre’s unique strengths to transform them all into new engines of economic prosperity and civic pride,” Coun Cooney said.

“I will ensure that swift delivery of major projects, such as the restoration and reopening of the historic Ashton town hall, and the heritage action zone in Stalybridge.”

He added that voters on the doorstep during the election campaign had raised concerns about street cleaning and fly-tipping which they also aimed to address.

“In that vein of listening to voters and concerns I intend to open up the council’s decision making process to ensure that every resident’s voice will be heard on the issues that matter to them,” Coun Cooney said.

Cabient and committee appointments were also signed off at the meeting. Coun Bill Fairfoull becomes deputy leader, and continues to hold responsibility for children’s services.