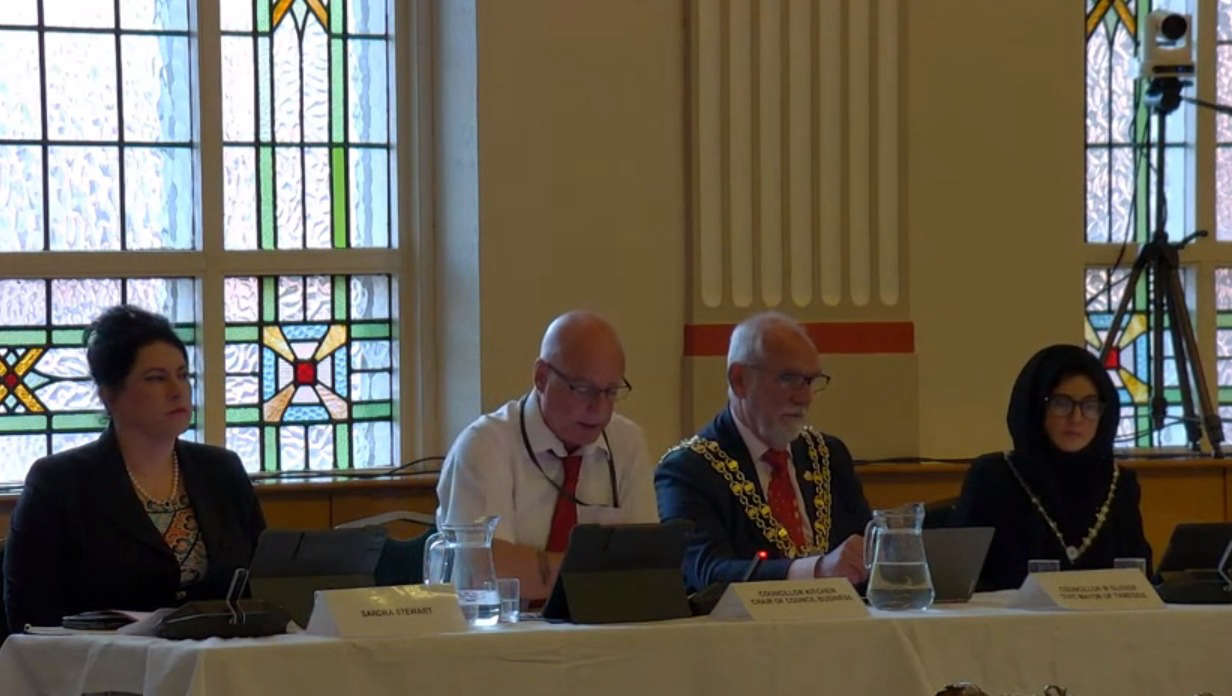 A new interim chief executive of Tameside Council has been appointed after Steven Pleasant resigned ahead of a report finding he breached legislation with a social media post.

Sandra Stewart, the council’s monitoring officer and head of governance and pensions, will assume the top role for a period of 12 months.
In an urgent item voted through at an extraordinary meeting of the council this week, councillors were told that the previous long-standing chief executive, Steven Pleasant MBE, had resigned without giving them time to find a replacement.
A report presented at the meeting found that Mr Pleasant, who had been the head of paid service for 13 years, breached government acts and the statutory code for local authority publicity when he expressed surprise on Twitter that a Tory voter had ‘compassion and empathy’.
The breaches relate to a tweet he posted on March 25 using his official chief executive account – six weeks ahead of the local elections – in which he responded to comments made by a Conservative voter on BBC’s Question Time. A clip from the TV programme showed an audience member who voted for the Tories telling minister Damian Hinds his government is a ‘disappointment’.
In a post that has since been deleted, Mr Pleasant replied on Twitter saying: “She was good. Tory voter with compassion and empathy for others. Who knew!!”
Ms Stewart will be paid £184,767, and will serve as the council’s electoral registration officer and returning officer.
In a year’s time a permanent recruitment process for the job will be undertaken, council documents state.
The report about Mr Pleasant’s post, written by Ms Stewart stated that there is ‘no further action’ required following the breaches.
However it is understood by the Local Democracy Reporting Service that if he had not resigned, Mr Pleasant would have faced a vote at full council on a range of options, including suspension without pay, being stripped of the role of returning officer, and doing nothing.
Council leader Ged Cooney told the meeting that ‘clearly events have overtaken this report and the chief executive has left the employment of the council’.
“Steven has been a great servant for Tameside Council and the local NHS,” he added.
However, Cllr Doreen Dickinson, the Tory opposition group leader, told the meeting that contrary to the report, her group had not accepted an apology from Mr Pleasant following his post.
Cllr Liam Billington, Tory member for Stalybridge South, said: “People will be asking today where is the accountability in this report.
“I do think it’s a shame that the former chief executive resigned before facing this council on this report.
“We all make mistakes and we all say things that people aren’t going to agree with. I know I have, I’ve apologised and I’ve faced the consequences of that.
“The difference is as councillors we face the ballot box every four years and we’re held to account by the electorate.
“Those in highly paid public roles like the chief executive on £220k a year are set to standards of political neutrality which are set in legislation and the code of conduct for officers.
“The case here is that we have the most senior officer that has evidently demonstrated a bias over one party. That’s an insult to the 36 per cent of people who voted Conservative at the last local elections in Tameside.”
He added that the council had hired a QC lawyer to review the case and for transparency purposes, their findings should be released.
In response, Cllr Cooney said: “One thing we won’t do is break the law.
“We brought this here because it was believed to be an infringement within the role that the returning officer has.
“The borough solicitor at the time has had to take advice on that and not how we can get round that, I want to make it clear.
“At no time whatsoever have I asked the chief exec to leave this council. He’s not got one penny extra than what he should have got – there’s been no enhancement, no compromise agreement, nothing.
“The chief exec himself decided to leave.”