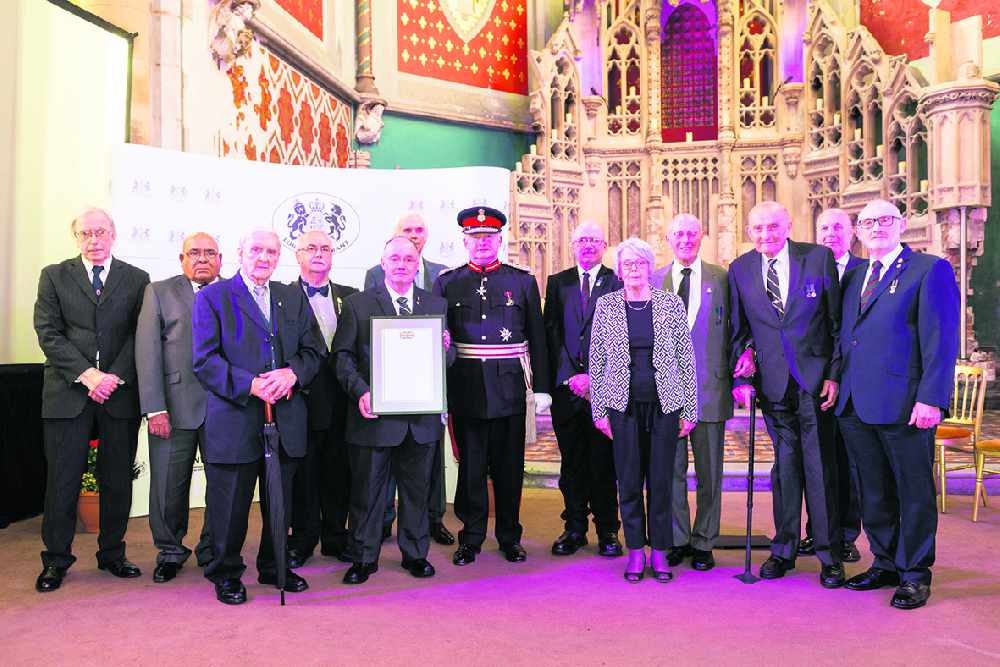 Thirteen members of the Manchester Regiment Old Comrades Association have been honoured at Gorton Monastery by Her Majesty’s Lord-Lieutenant for Greater Manchester.

The honour recognises their exceptional dedication to the ‘Turning of the leaves’ ceremony.

During the ‘Turning of the leaves’ which is held at Manchester Cathedral, a page is turned in the Book of Remembrance for the Duke of Lancaster’s Regiment, each page containing the name of servicemen who have died in service.

The simple, dignified ceremony is overseen by a cathedral verger, during which seven veterans turn the leaves of the seven books and the collects of the Manchester, Kings and Duke of Lancaster’s regiments are read.

Memorials are also read in the memory of recently deceased veterans. The verger then gives short prayers for peace, Queen and commonwealth.

The average age of the people who carry out this voluntary task is 75 years. 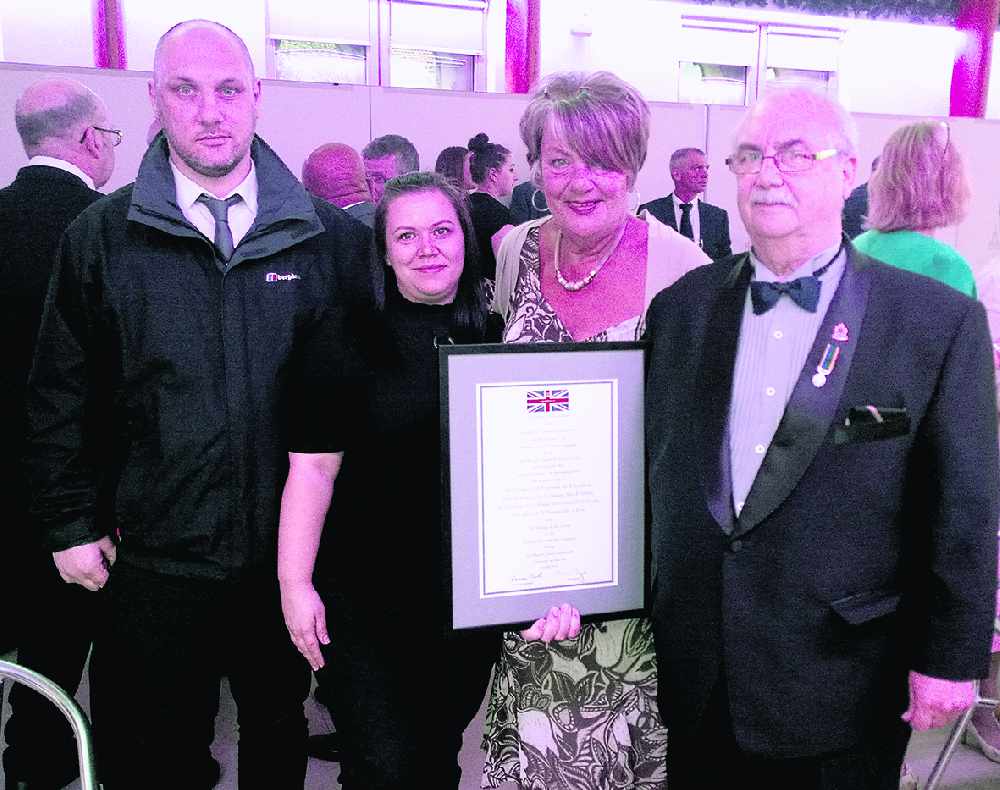 The team leader, Peter Ashworth, is 85 years old, whilst the oldest is 89 years old Harold Jackson who travels from his home in Liverpool by public transport, a round trip of 65 miles. Peter has been doing the weekly journey regularly since 1988.

The old comrades are totally dedicated to the continuation of this act of remembrance and turn up fortnightly whatever the weather. Some of them are now a little unsteady on parade but are nonetheless determined to be there despite having to travel considerable distances.

Locally, Peter Ashworth from Denton, Don Rhodes of Hyde, Graham Braithwaite of Mossley and Pete Blencoe, now of Cheetham Hill, were among those to be honoured.

These four men had served in the local 9th Battalion of the Manchester Regiment based at Old Street, Ashton, and were proud to be of service at the Cathedral since their service ended, intending to keep their posts for many years to come.

The presentations were made by Mr Warren Smith KStJ JP DLitt LLD, Her Majesty’s Lord-Lieutenant for Greater Manchester. During the ceremony he said: “I truly thank all of you for your dedication, it is right that they are recognised for your meritorious voluntary service.”

Graham added: “It was the proudest of moments to be presented with a Lord Lieutenant’s Meritorious Service Award.”

In total 36 cadets, reserves and adult volunteers were presented with Her Majesty’s Lord-Lieutenant’s Awards. The awards are recognised as laudatory honours throughout the Ministry of Defence.

Among those to be recognised  was Vanessa Rothwell (pictured right) who also received a Lord Lieutenant’s Meritorious Service Award by Warren J. Smith. The accolade recognised her work for Tameside Council on behalf of the veterans of the area, giving up her own time to promote, organise and to develop the services. 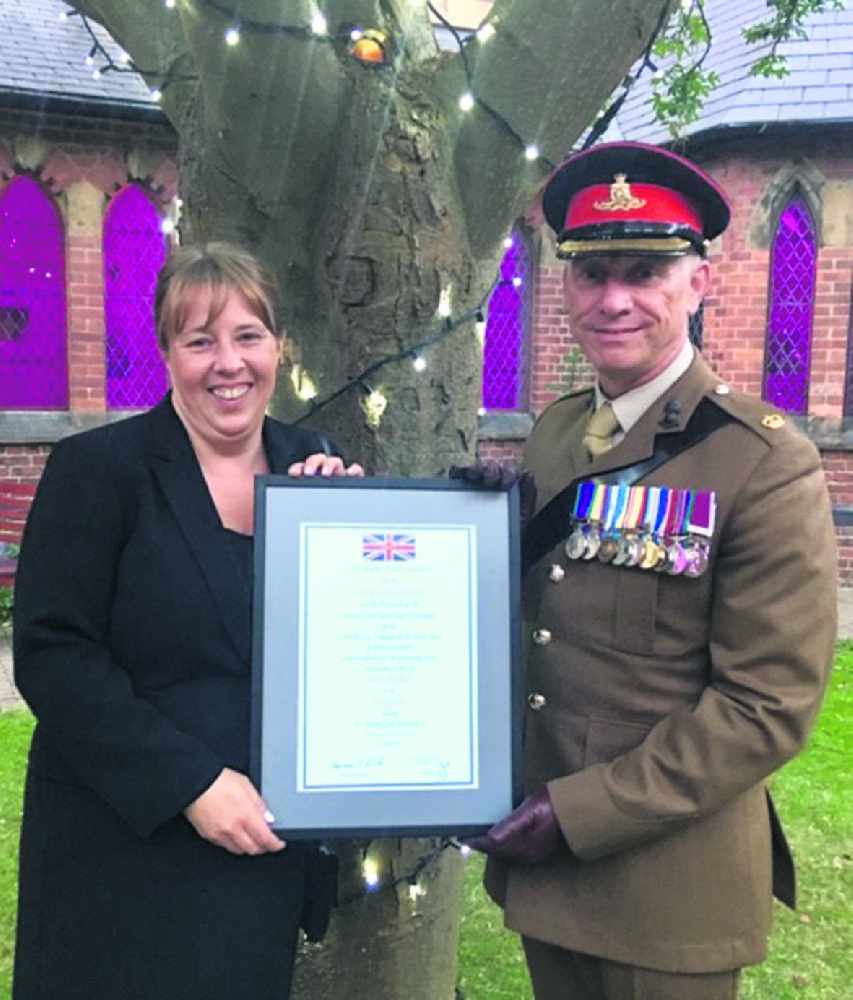 The evening also saw the appointment of Her Majesty’s Lord-Lieutenant’s Cadet, one of the highest honours a cadet can achieve.

The annual awards are organised in each County in the region by the Reserve Forces’ and Cadets’ Association for the North West of England and the Isle of Man (NW RFCA).

NW RFCA Chief Executive, Colonel Mark Underhill OBE DL, said: “As the organisation which supports and promotes the Reserve Forces and Cadets in the region, these awards ceremonies truly are the highlight of our year.

“The Cadet organisations, both in communities and in schools, offer young people unparalleled opportunities, experiences, skills and qualifications.

“The achievements of the cadets who have received these awards  truly are outstanding, and they are highly deserving of the recognition of Her Majesty’s Lord-Lieutenant Award.

"None of these opportunities would be possible without the dedication and commitment of the Cadet Force Adult Volunteers who give freely of their time and skills for the benefit of young people.

“The awards give us an opportunity to celebrate their exceptional volunteer service, and to thank them.”