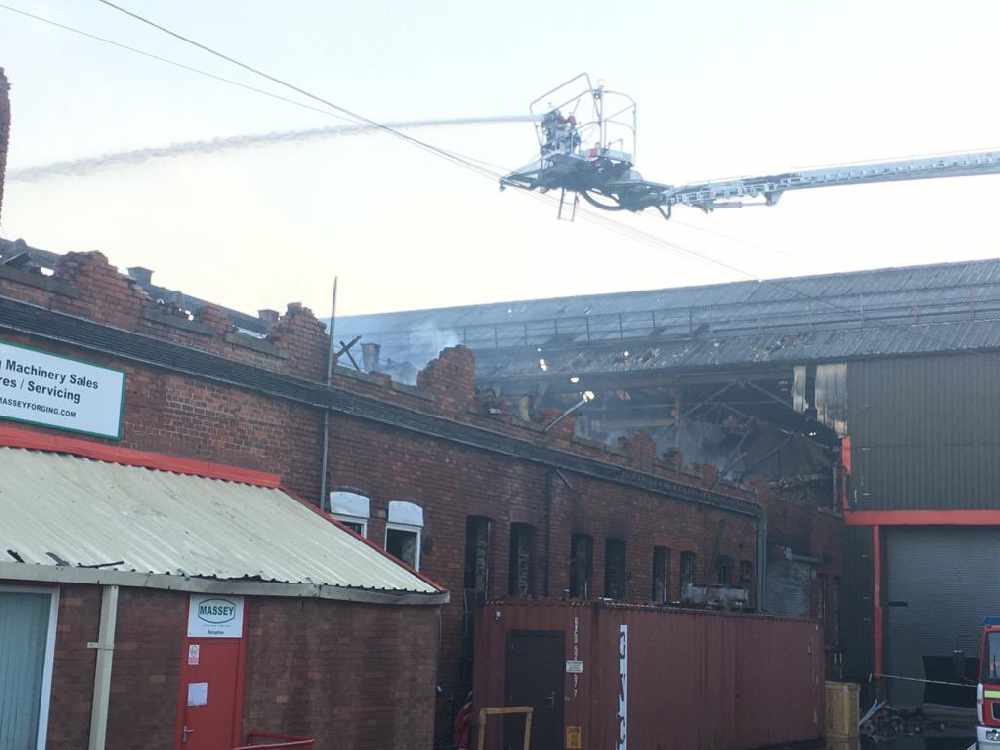 Around 50 firefighters worked throughout the night to extinguish a huge blaze on the Adamson Industrial Estate in Hyde.

As of 7am on Sunday (April 5), just five fire engines and an aerial platform remain at the scene of the large fire on Croft Street.

Greater Manchester Fire and Rescue Service (GMFRS) say crews have worked diligently through the night to extinguish the blaze, which at its height consumed three large buildings over a 300m x 200m footprint. They will be at the scene in Hyde for most of the rest of the day (Sunday).

Station Manager Chris Hanson, in charge at the scene, said: “I cannot praise our firefighters enough – operating in the middle of the night in dangerous conditions they systematically worked to extinguish the fire and I am pleased to say we are now on top of the situation. There are just a few hot spots remaining and the crews that are still here are engaged in damping down the scene to prevent flames from reigniting.

“I cannot praise our firefighters enough,” says SM Chris Hanson, in charge at the scene in Hyde. 👩🏻‍🚒🙌

“I am pleased to say we are in top of the situation... crews that are still here are engaged in damping down the scene to prevent flames from reigniting.” 🔥💪 pic.twitter.com/D0iLLPQ31h

“This has not been an easy fire to tackle. Spread over quite a large area and involving brick buildings three storeys high in places, of great concern was the large amount of chemicals stored at the scene given the industrial nature of some of the business involved.

"The three buildings have each suffered considerable damage and have collapsed in places, and further demolition may be required later today. The cause of the fire remains unknown and an investigation will begin soon.

“Greater Manchester Fire & Rescue Service will remain here in Hyde for the rest of today and nearby road closures remain in place, as does the closure of the local railway line though we expect that to reopen soon.

“I want to thank local people for their support and co-operation through the night – given there is still smoke and ash in the air, please continue to keep the doors and windows of your homes closed until informed otherwise.” 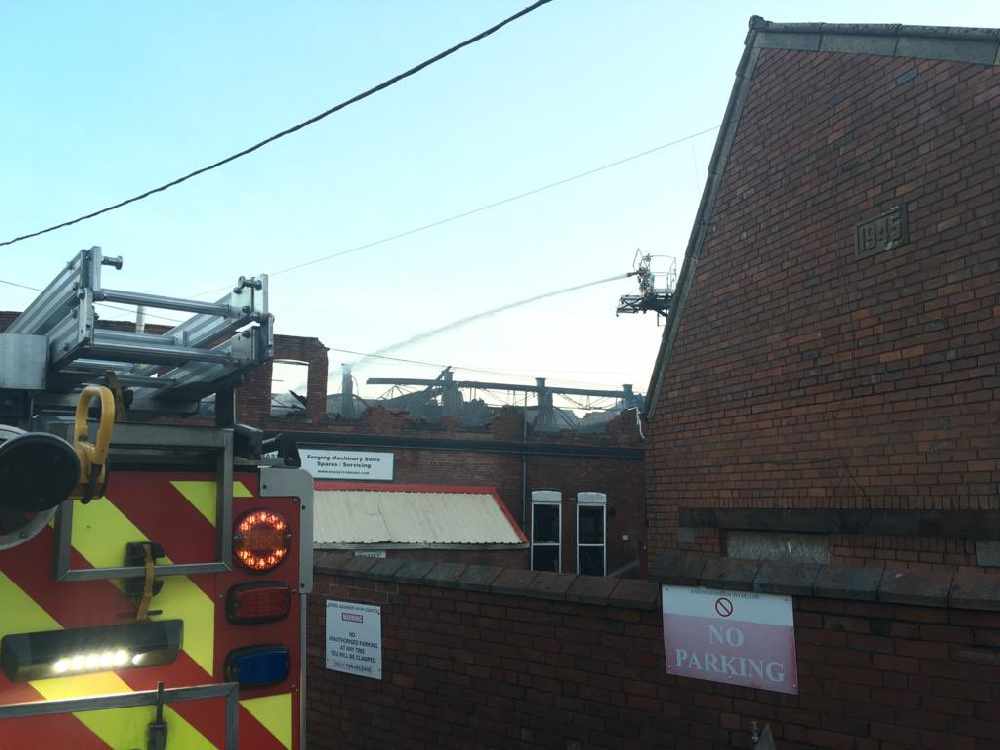 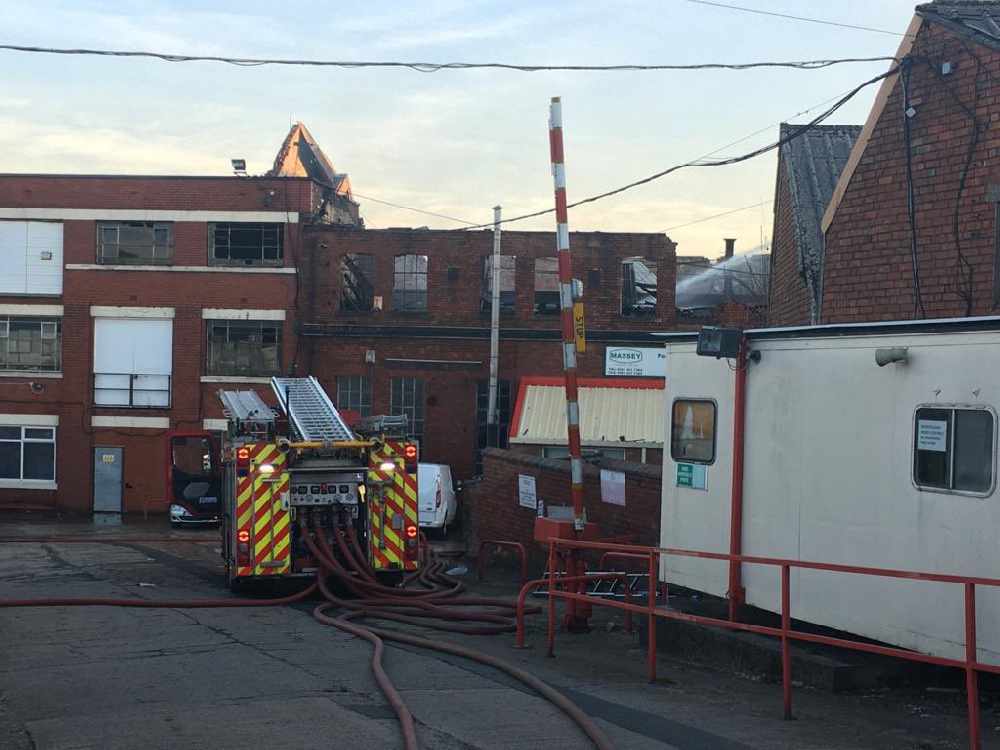 The scene on Sunday morning. Images by Greater Manchester Fire and Rescue Service

GMFRS say they would like to thank colleagues from Greater Manchester Police, North West Ambulance Service and Tameside Council for their support overnight.

The fire was first reported on social media at around 8:30pm on Saturday evening (April 4) on Croft Street, close to the town's fire station.

The smoke was seen for miles across Tameside.

These images taken by the fire service's air unit show what the fire looked like from above: 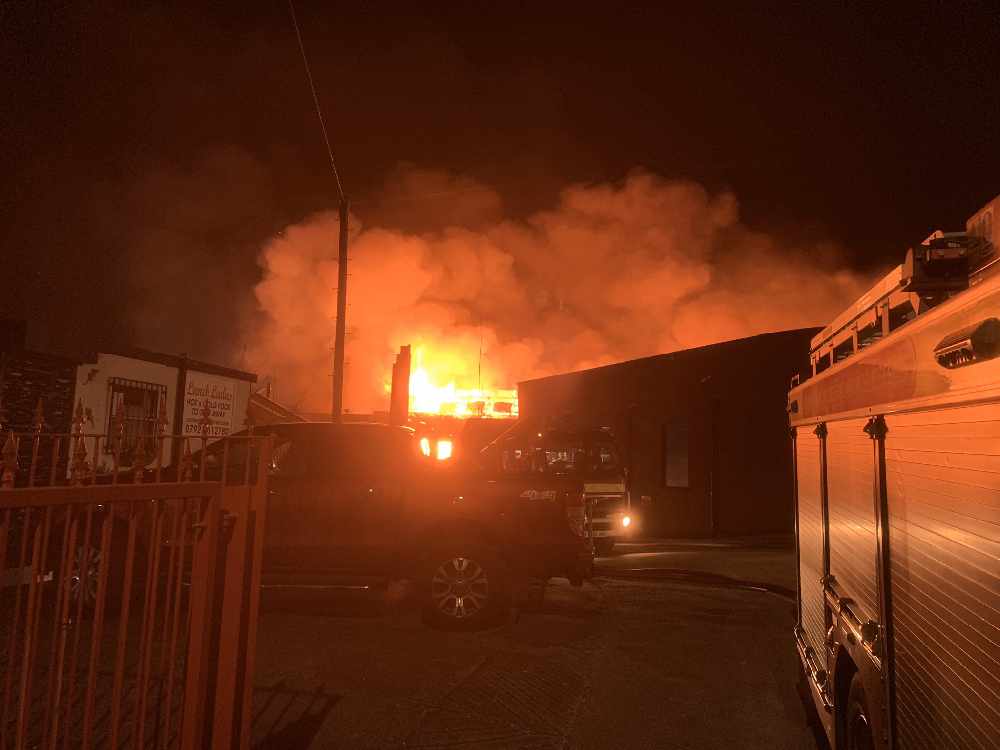 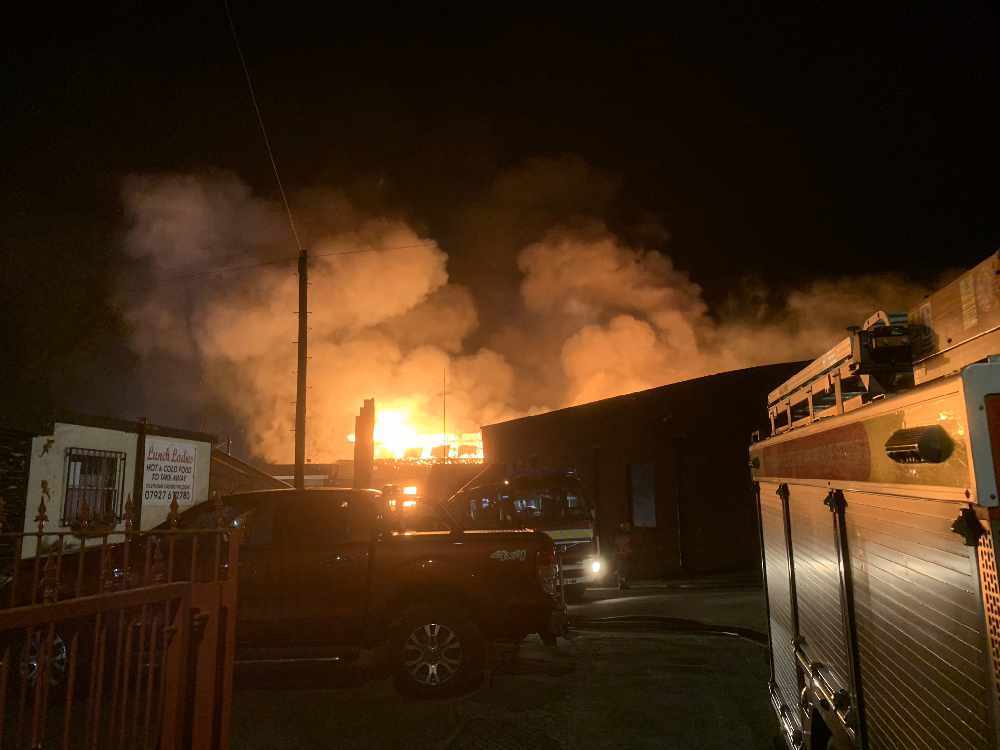 At 11pm on Saturday, the fire service reported that there were 15 fire engines at the scene involved in tackling the flames over an area that had grown in size to approximately 300m by 200m. The fire involves a range of buildings across the site, some of which are three storeys, and the roofs of several were well alight.

Incident commanders had divided the scene into four sectors to enable firefighters to make swift progress – hose reels, lances and three aerial platforms are enabling the fire to be fought both from ground level and from above.

A 200m exclusion zone had been placed around the industrial estate and colleagues from Tameside Council have closed the following streets:

People living in the vicinity were being asked to keep the windows and doors of their homes closed until advised otherwise.

GMFRS thank colleagues from Greater Manchester Police (GMP) for their assistance with both traffic management and maintaining the 200m cordon. 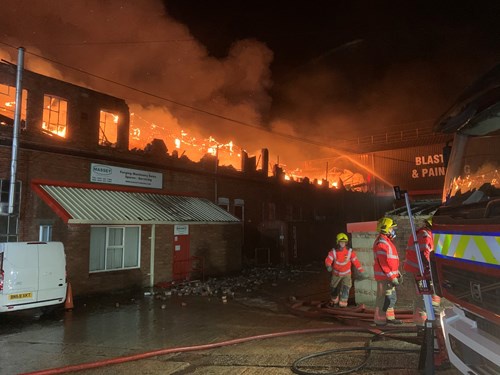 Firefighters working to bring the huge fire under control on Saturday night. Image by Greater Manchester Fire and Rescue Service.

In an initial statement at 9pm on Saturday, the fire service said: "Greater Manchester Fire & Rescue Service (GMFRS) were called to reports of a fire at 8.29pm on Saturday 4 April and crews were quickly on the scene.

"The blaze is affecting a large 100m by 50m brick building containing multiple business units. Firefighters from stations including Ashton, Gorton, Hyde, Stalybridge and Stockport, among others, are currently battling the flames using breathing apparatus, two jets and a lance. GMFRS has also deployed two aerial platforms to fight the fire from above.

"Local residents are asked to remain indoors and keep windows and doors closed until emergency services can update. The public are also requested to keep nearby roads clear of traffic to allow swift access for emergency vehicles. An update will follow."

Here are some images and footage taken by local residents:

Hyde on fire. One of the warehouses next to the canal - Adamson Mill, Croft Street. Stay safe everyone !

These images show the impact of the fire, sent to us by Mike Blackburn: 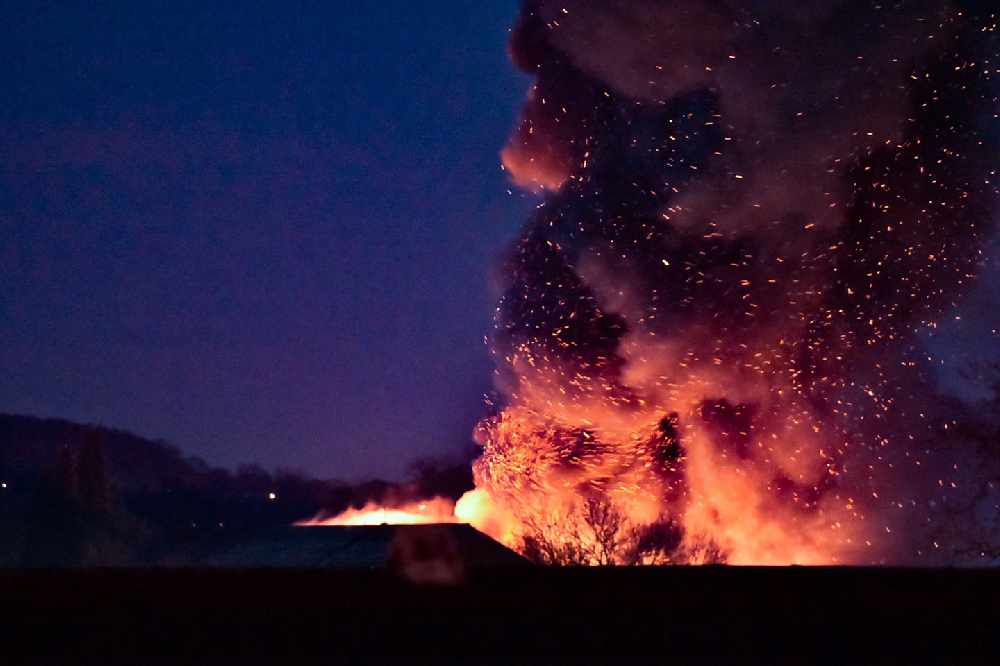 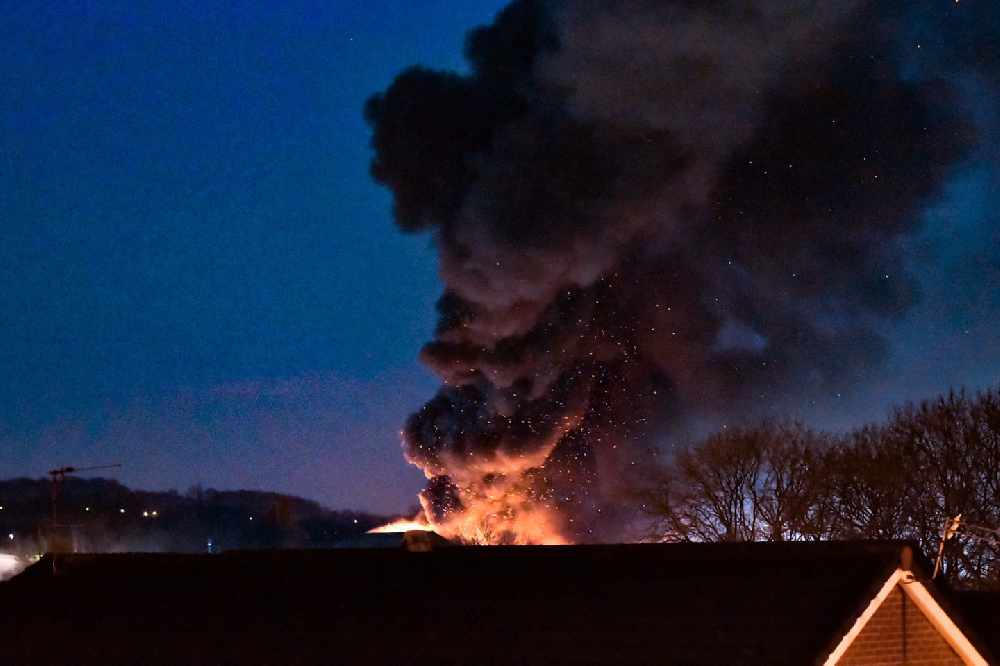 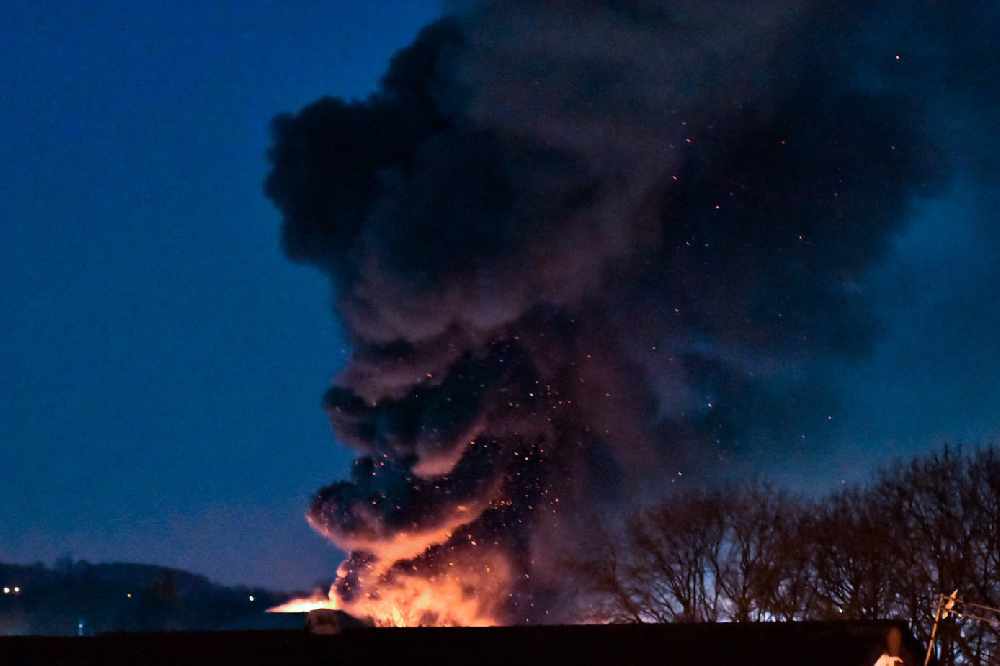 Below is the view of smoke seen from the Newton area, taken by Dan Wright: 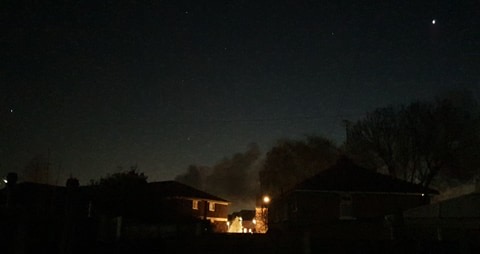 This was taken near Dukinfield Golf Club by Shawna Sibson: 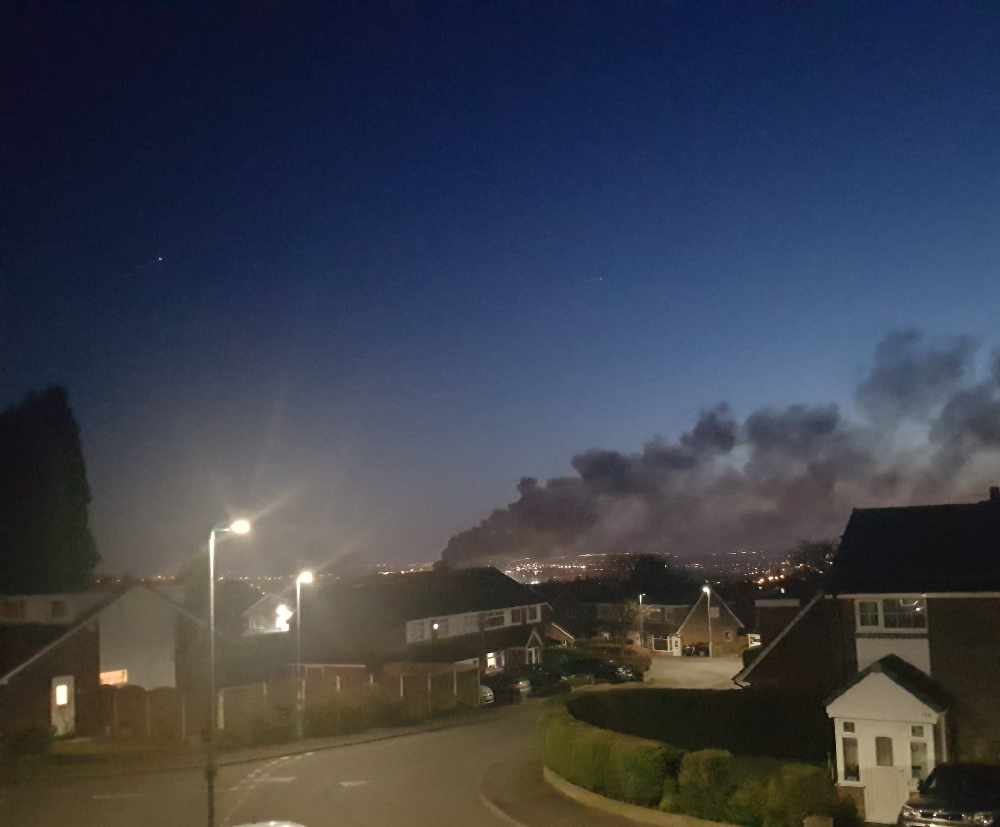 This was taken in Hattersley by Kelly Billinge: 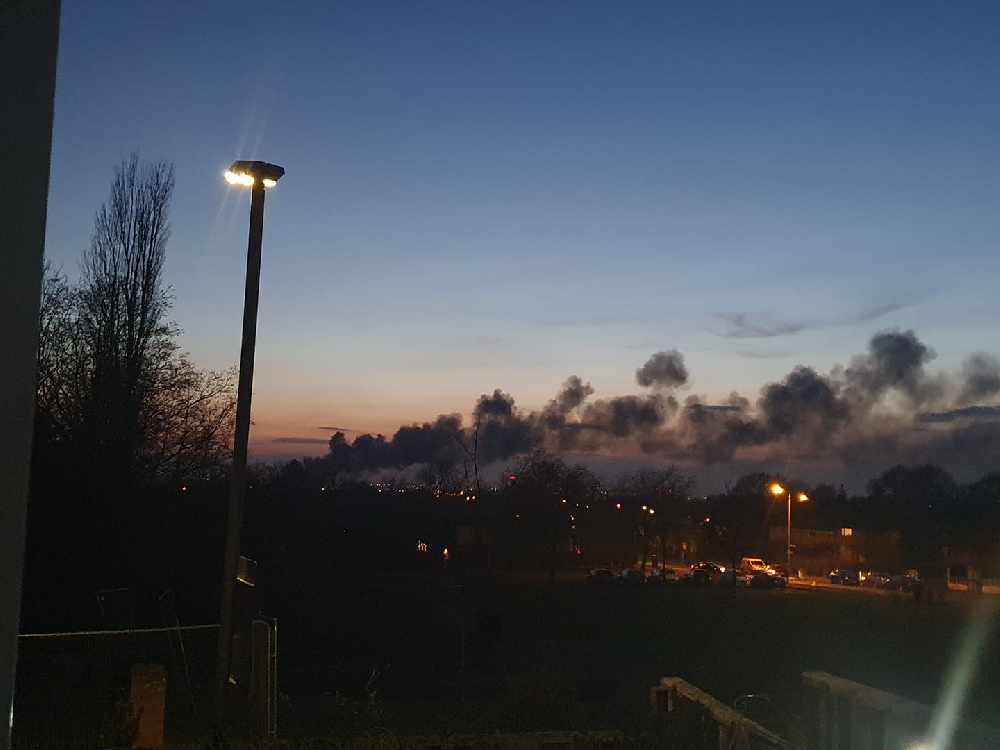