How a Mossley restaurant found fame during Queen's Christmas speech 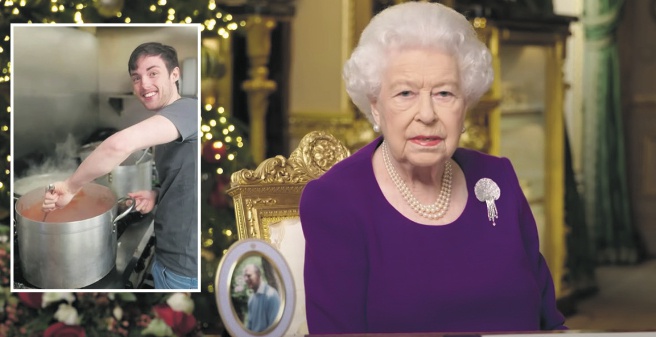 A community-minded Mossley restaurant found surprise national fame during the broadcast of the Queen's Speech on Christmas Day.

Her Majesty The Queen recognised and thanked all of the community efforts that individuals, groups and businesses had made across the country during lockdown.

She added that ‘Good Samaritans’ had emerged ‘across society showing care and respect for all, regardless of gender, race and background’.

Her speech was accompanied by a series of photographs of those ‘Good Samaritans’ including Captain Sir Tom Moore, nurses and care workers.

While one was also a picture of Declan McMormick helping to cook up food for delivery from Mossley’s San Giorgio restaurant on Stamford Street which was distributed to the vulnerable during the first lockdown.

In a statement on its Facebook page the restaurant said: “Some of our eagle-eyed customers may have noticed that our very own Declan McCormick (cooking from our sister pizzeria Antonio’s) made a brief appearance in the Queen’s speech for the work we did cooking and serving meals to the vulnerable during the first lockdown and food shortages.

“We are humbled to have this recognition and must stress that it was on the whole a community effort and would have been impossible without the donations of both food and money and legions of people who volunteered to help with delivery and cooking.The same picture also appeared on The Duke and Duchess of Cambridge’s Instagram feed (on Christmas Day).

“Thank you so much to all of our customers and people who have supported us during this turbulent year, thank you for your extra patience and kind a constructive feedback.”

As we reported last year, Anthony Owens and his team at San Giorgio turned their kitchens into a production line to make meals for around 70 elderly and vulnerable people at a time in the first lockdown.

After cooking, the meals were decanted into disinfected Tupperware before being frozen and packed for delivery to those most in need.