Houses approved for Stalybridge despite fears of 'massive problem' with parking

A row of four-bedroom terraced houses are to be built in Stalybridge, despite concerns the development would cause 'a massive problem' with traffic and parking.

The development of five houses will be built on land adjacent to Wakefield Road, with access taken from Kinder Street.

Councillors on Tameside’s planning panel were divided over the proposals, with five members voting against the development.

The land is currently undeveloped.

Plans for new homes on the site were previously approved by the council in 2008, but never enacted.

Under the current plans, each house would have four bedrooms, with the upper floor in the roof space.

Concerns had been raised by residents about the number of car parking spaces, which would be seven for the five dwellings, including one disabled space.

Planning officers also noted concerns about the congestion in the local highway network, and pressure on on-street parking on Kinder Street, which is ‘very narrow’.

“It is the case that parking on both sides of the highway would result in a safety hazard,” the committee report states.

There had been 17 objections to the plans from neighbouring properties, and two letters of support.

Stalybridge North Councillor Jan Jackson spoke against the application, telling the meeting that social media ‘went wild’ after she asked residents for their views.

“The planned development could increase traffic by at least ten cars. You’d have to see it to believe it, the impact that it’s going to have on this community.

“If this planning application was approved today they’d be a massive problem with parked vehicles, not to mention the emergency services if god forbid someone was needing those vital services in the middle of the night.” 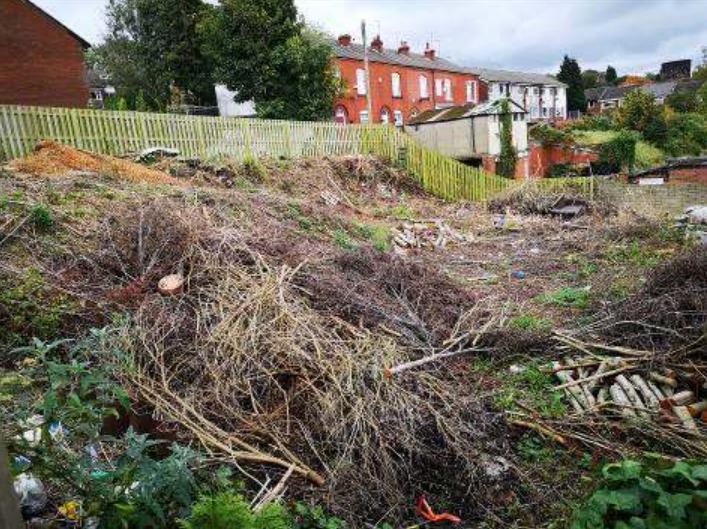 She also raised concerns about traffic during the construction phase.

“Residents accept that the land to be built on would be better than what it is at present, with people fly-tipping and putting their waste on,” Coun Jackson added.

“But there will be a massive problem and the concern is about the parking and it will probably raise neighbourhood disputes.”

Coun Doreen Dickinson told the meeting she was also not happy with the number of parking spaces provided, adding a four bedroom house could have up to three cars for the property.

“I do know this area and I know how tight it will be on Kinder Street,” she said.

Speaking on behalf of the applicant Joe Campbell, agent Simon Plowman said he understood that some people had concerns over parking and access.

But he added: “Kinder Street will in effect be widened by this development as a two metre wide footpath is to be provided.”

Planning officer David Thompson told the meeting that council policy advised that four bedroom houses would have three parking spaces, but that was a ‘maximum’.

“It is considered to be a sustainable location, you’ve got regular bus transport links on Stamford Street,” he said.

“The site is within walking distance of the services and facilities in Stalybridge town centre including the train station. There are no objections from the local highway authority.

“It is acknowledged that the highway network is quite narrow, particularly Kinder Street and the surrounding roads to the north of this.

“But existing properties don’t have in-curtilage parking areas as is proposed in this case.”

He added the number of parking spaces to properties would be a ‘much higher ratio’ than ‘is common’ in the area of Stalybridge.

Seven councillors on the panel voted in favour of the plans, with five voting against.

Plans for five houses which will be built in Stalybridge, off Kinder Street. Photo: CAD Architectural/Joe Campbell.