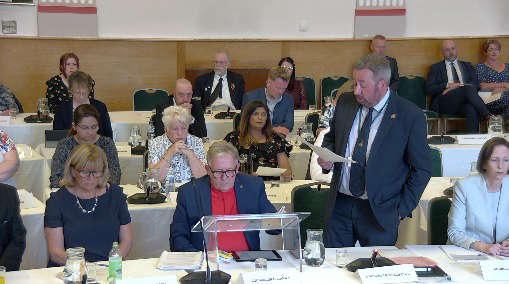 The government is to issue the council with an official improvement notice over its children’s care department, which has been repeatedly criticised by Ofsted.

Earlier this month the watchdog issued a report into the borough’s children’s services – which have been rated ‘requires improvement’ since 2019 – saying political and corporate leaders did not know their service and the impact on children ‘well enough’.
Following a focused visit assessing the ‘front door’ of the department, Ofsted also said the response to some children ‘at immediate risk of harm had deteriorated’ since its last inspection in 2021.
After the publication of the report, Andrew Gwynne, the Labour MP for Denton and Reddish, called for Tameside’s children’s services to be taken out of the council’s hands and placed with an independent trust.
He had said the service is currently ‘letting children and families down’.
However Councillor Bill Fairfoull, the council’s cabinet member for children’s services said the MP’s comments were ‘unhelpful’.
“This council has no intention whatsoever of taking children’s services into a trust,” he told councillors at at an extraordinary meeting.
“I know this suggestion has been very unsettling for members of staff and our foster carers but language like this is unhelpful when one of our priorities is actually to work towards staff retention and also grow our foster service.”
He was outlining an action plan, which was agreed by council, about how to turn the service around.
“In addition to being required to respond to the urgent immediate recommendations from Ofsted, the Department for Education have now advised us that they will be issuing Tameside with a formal improvement notice which will be in place for 12 months or as long as it takes to get to a good situation,” Cllr Fairfoull added.
“This notice brings us additional support and advice and there will be an appointed improvement advisor who will work with us to give assurance to ministers that we’re on track to deliver improvement action and we all see this as positive support.”
He said they were also reaching out to Stockport council to support them improve their department.
There had already been a ten per cent reduction of children coming into care, Cllr Fairfoull said, but added: “Our numbers are so big we’ve still got a lot of work to do on this.
Additionally there will be the creation of a multi-agency improvement board with an independent children’s expert as chair to ‘hold us to account for specific measurable progress’, he said.
He added they want to get accommodation placements in the borough so that young people are not being sent out of Tameside.
Since the local elections in May they had also introduced a children’s and families scrutiny panel which included a member of the Conservative opposition group.
“That’s actually holding myself and the new director to account about the pace of changes on the improvement plan, which is something we really must deliver for Tameside,” Cllr Fairfoull added.
“This council is fully committed to getting this right and ensure our children, of which we are all corporate parents, have the best possible start.
“Children must be at the heart of our decision making.”
Tory group leader Cllr Doreen Dickinson said they welcomed the change in tack to work ‘cross-party to remedy the situation’.
“I’m delighted that at last something positive is being done to help our children that need us,” she told councillors.
Previous criticisms of the service about the slow rate of progress made by Conservative opposition councillors have previously been condemned at meetings by senior Labour figures.
Cllr Ruth Welsh said that for ‘too many years we have been given information and assurances that have not aligned with our experiences on the ground as elected members’.
“There has been a distinct lack of accountability and responsibility,” she added. “If we as the opposition have spoken out with concerns we have been faced with accusations of playing politics with children’s lives or being troublemakers.”
Cllr Dan Costello, Tory member for Ashton Hurst directly criticised Cllr Fairfoull, who has held the portfolio for services for children for three years.
“This latest report makes clear the failings of political and corporate leadership in children’s services,” he said.
“Where is the accountability for the political leader of this department? How long must we continue to suffer with his failings.”
He referenced Mr Gwynne’s call to take the department out of the town hall’s hands, saying that ‘even he doesn’t think they are fit to run it’.
“Where does the government cuts excuse stand when one of your own MPs, a former councillor in this chamber, says it’s about failures of political leadership and not money,” he added.
Cllr Fairfoull responded that if he thought Ofsted wanted a change of political leadership in the service, he would step aside, but this had not been the case.
Also replying to comments from the Tory group, the new council leader Cllr Ged Cooney said they have to be ‘transparent’ about the issues.
“It is important that when we get things wrong we accept that because there is no point in winning a political argument at the expense of the children,” he told the meeting.
“The points you’re raising in some cases are correct, I’m not going to dispute that, I’m not going to try and defend it.
“That report is devastating and we’ve got to accept that. But do we move forward? Yes.
“We do challenge and should challenge every cabinet member here. Sometimes we should accept it’s not working.
“I do hope that going forward we as a collective move as one because it’s the children in the borough that will have the damage done to them if we don’t sort our problem out.”