Dukinfield teacher on the run for Scanner Appeal 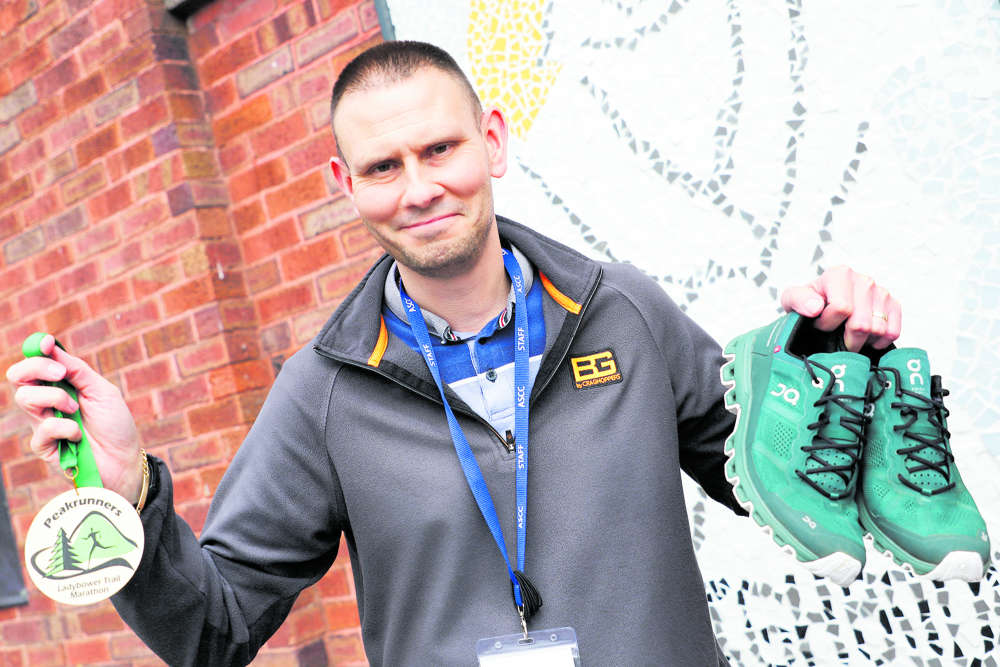 An ultra-fit teacher has taken on a gruelling uphill challenge to fundraise for the Tameside and Glossop CT Scanner Appeal.

Bryn Jones, who teaches at All Saints Catholic College in Dukinfield, took on the Ladybower Trail Marathon for the charity in place of a close friend.

The run, which is a full distance of 26.2 miles, takes place over rough and uneven terrain, making it even harder than a standard marathon. Runners climb to more than 2,000 feet of elevation through the picturesque Derwent Valley as they complete the challenge.

The hospital Scanner Appeal was launched in late 2019 and aims to raise £1million for a new CT scanner, which plays a vital role in the early detection, diagnosis and treatment of patients.

Bryn says he was inspired to sign up to the event by his friend, who is currently terminally ill with breast cancer and has used the current scanner at Tameside Hospital.

“I do a lot of things for charity, mainly for prostate and breast cancer charities, but a friend of ours unfortunately is terminally ill with breast cancer,” he said.

“She got in touch and asked if I would kindly do something on her behalf for the scanner appeal.”

Bryn is a keen runner, competing in marathons, ultra marathons and triathlons for many years and has run in the past for Hyde Village Striders, as well as coaching for Hyde Running Community.

Over the years, he has used the current scanner himself for injuries sustained during sport, but says he knows how important the scanner is for diagnosis of illnesses.

“All residents at some point could use that key piece of equipment so when our friend asked me a number of months ago I jumped at the chance.

“Given what she’s going through I think to put myself through little bit of pain is the least I could do really.”

Despite already being a fitness fanatic, Bryn says he still had to train for three months to get ready for the challenge.

He said: “My wife helped me with that plan, she was key to coming with me on the long runs and she was with me when I did the Ladybower Derwent Trail marathon.

“It’s not easy by any stretch. I’ve done a number of them in the past and ultra marathons, it’s a totally different animal doing a trail marathon with the elevation and terrain.

“It was nice to do it for a worthwhile charity after not being able to race for the past 15 months.”

As well as the elevation and uneven terrain, Bryn had the additional challenge of ‘Ultramarathon rules’ which state that he must carry a rucksack with waterproofs, liquids and food in it.

So far, Bryn has raised just over £700, and hopes to get upwards of £850 thanks to the fantastic support of pupils and teachers at All Saints.

“They’ve been tremendous, they’ve supported me from the offset, they’re doing a number of things in school to raise awareness of the appeal,” said Bryn.

You can still donate to Bryn’s fundraiser online by visiting https://www.justgiving.com/fundraising/bryn-jones35