Three men and a woman have been sentenced after being rumbled by detectives in Tameside investigating a drugs line that profited around £80,000 from the criminal exploitation of teenage boys.

Wall, of Lakenheath Road in Liverpool, and Thornton, of Barlow Road in Dukinfield, were sentenced to a total of 17 years after admitting arranging or facilitating the travel of another person with a view to exploitation under the Modern Slavery Act - becoming the first people to be convicted of child criminal exploitation by Greater Manchester Police.

Despite not being charged with the same offence, the court also accepted that Daniels - herself a mother - of Fitzroy Street in Ashton, was aware and complicit in the movement of the teenagers in order for them to deal drugs. She was given a one year and two month suspended sentence.

Sleddon, of Claremont Court in Blackpool, admitted that the children had stayed at his address in return for him being supplied with drugs. He was given a two-year suspended sentence.

The verdicts conclude an 18-month investigation into the transportation of drugs and children - aged between 13 and 16 - led by detectives in GMP Tameside's Complex Safeguarding Team.

Investigators began the operation - codenamed 'Fairview' - following the report of a boy who was missing from the Hyde area. After close work with Lancashire Police, it was identified that he had been moved to Blackpool and was being used by the gang to supply class 'A' drugs on the streets.

Enquiries confirmed that two other teenage boys who had been missing from the nearby Ashton area had been in contact with a number associated with Wall, who was jailed for nine years.

Police say a picture was already starting to develop of a group conspiring to supply class A drugs - namely heroin and crack cocaine - and also transporting the young boys to Blackpool to deal these drugs on the streets, often leaving them to fend for themselves for days.

While it is not thought the two boys - and a third boy also found to be exploited - were ever injured, detectives believe by leaving the boys alone to be involved in illicit enterprises in towns miles away from home was exposing them to a real and significant danger.

Officers ensured the boys were immediately referred to relevant specialist agencies and safeguarded away from further harm, and have pursued with a victimless prosecution to ensure that the gang are still held to account for their crimes.

A strike day was executed at the start of October 2020 where eight people - aged 16 to 67 - were arrested, before Wall, Thornton and Daniels were charged and eventually admitted two counts of conspiracy to supply a controlled drug.

Detectives also proved to the court that Thornton, who was jailed for eight years, was also controlling a 'drug line' local to the Tameside area supplying heroin, cocaine and cannabis. He had also entered guilty pleas for these matters.

While similar charges have been secured in other complex safeguarding teams in Greater Manchester for offences relating to Child Sexual Exploitation, the unit in Tameside is the first to land a conviction under the Modern Slavery Act in relation to Child Criminal Exploitation 'county lines'  gangs - with support from the Crown Prosecution Service.

Comprising of specially-trained detectives, safeguarding officers, and partners from Tameside Council; the Complex Safeguarding Team currently has nine ongoing investigations and a number of suspects have been arrested. Children who have been identified as needing to be safeguarded have in some cases been re-homed. 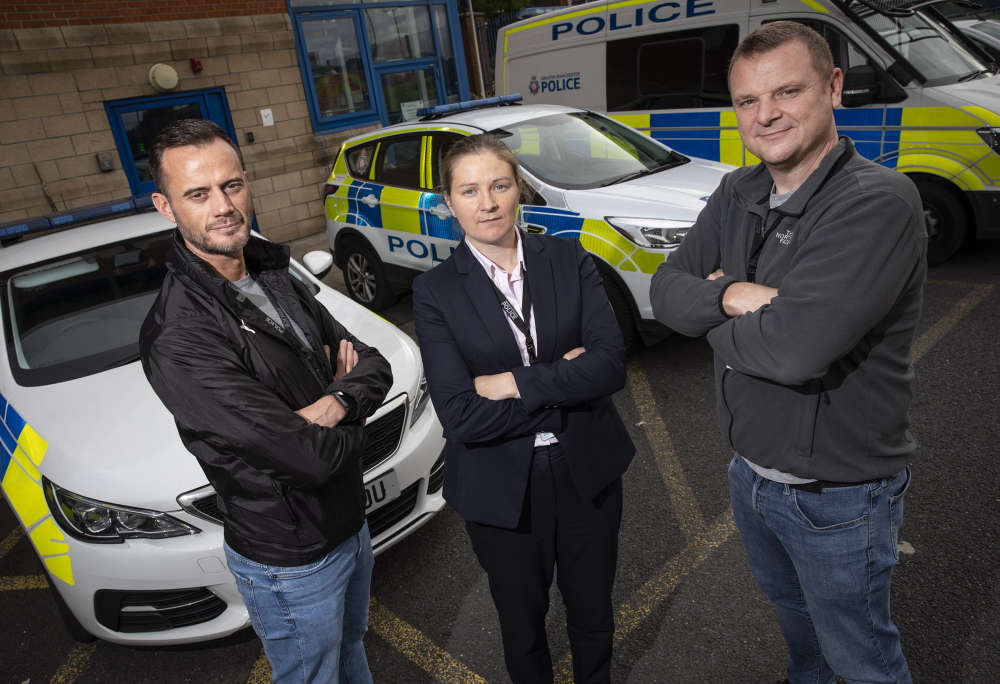 The policing team behind Operation Fairview

Detective Constable Matthew Elliot, from Operation Fairview, said: "Today, this group has been jailed for their roles in a county line gang - wrecking lives along the way through the dissemination of illegal drugs.

"But what we've been able to prove to the court during this investigation, is that Wall and Thornton - in particular - were not just trafficking drugs but also trafficking people.

"They were running their drugs line to Blackpool by deliberately targeting teenage boys, and exploiting them for their own illicit gains.

"These were boys who were identified by the group as vulnerable, and groomed into travelling between counties - left to fend for themselves and exposed to danger - to do the dirty work on the ground that these offenders didn’t wish to do themselves.

"The act of exploiting children and peddling them for such selfish and criminal ways is an abhorrent crime - but one that is complex and wide-ranging which makes today's outcome all the more of a success.

"And it isn’t just putting offenders behind bars that makes this operation a great result. The fact we have been able to work with partners and ensure victims have been safeguarded and away from harm is just as - if not more - significant.

"I would like to thank our partners at Tameside Council, Lancashire Police, and the Crown Prosecution Service, for the extensive support they have offered to this investigation and helping us ensure these historic convictions for GMP.

"This has been a tireless eighteen-month investigation by our Complex Safeguarding Team in Tameside, and hopefully the first good result of many.

"We have demonstrated how by working with local police forces, local authority, and other relevant supporting agencies, that we are able to target and dismantle those involved in this truly despicable criminal activity - while identifying and protecting victims in the process.

"If you feel you are being criminally exploited, or know someone who is, then please come forward to the police or Crimestoppers, knowing information will be treat with the strictest confidence."

Tameside Council Executive Member for Children and Families, Councillor Bill Fairfoull, said: “Superb partnership working has resulted in this first conviction of Modern Day Slavery in Greater Manchester. We have removed these drug dealers from our streets and stopped them from exploiting our children. Our Children’s Services staff have worked tirelessly with the police to secure this result and I’d like to thank everyone involved for their hard work.