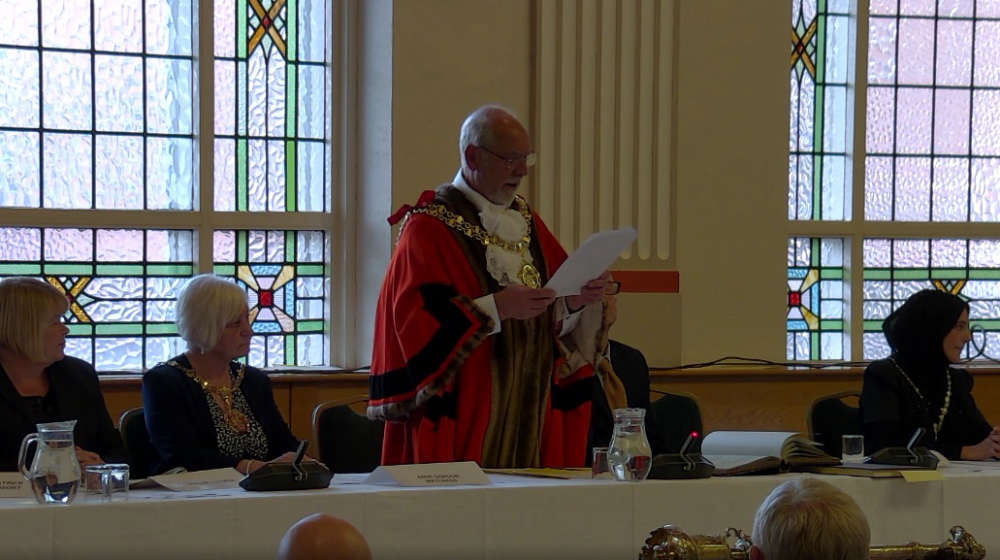 Councillor Mike Glover being sworn in as the civic mayor at the council meeting. Image: Tameside Council.

A councillor who has doubled up as Father Christmas is taking on the chains of office to become the new Civic Mayor of Tameside.

Councillor Mike Glover takes over from Coun Janet Cooper, who served two terms in a historic first after her mayoral year was derailed by the Covid-19 pandemic.

She handed over to her successor Coun Glover, who represents Ashton Hurst, at the council’s annual meeting on Tuesday, May 24.

He will be supported during his year of office by his close friend, Anne Gordon, who will be Mayoress.

“I take the said office upon myself and will duly and faithfully fulfil the duties thereof, according to the best of my judgement and ability,” he told councillors as he was officially sworn in.

Coun Glover was first elected in 2015, and he has served as deputy Mayor for the past two years.

He has also held a number of other roles within the council, including chairing the place and external relations scrutiny panel and a member of the north strategic neighbourhood forum, the overview panel and planning committee.

Outside local government, Coun Glover is a keen motorcyclist, and has been a member of Rotary for 27 years, often standing in for Santa at the Christmas sleigh run around Ashton and helping to organise the Tameside Beer Festival. He also has a long association with Ashton Parish Church.

He is currently considering which charities to support through the annual appeal fund.

“I’m especially looking forward to meeting volunteers of all ages and to working with groups from all parts of Tameside’s wide and diverse community as well as schools.”