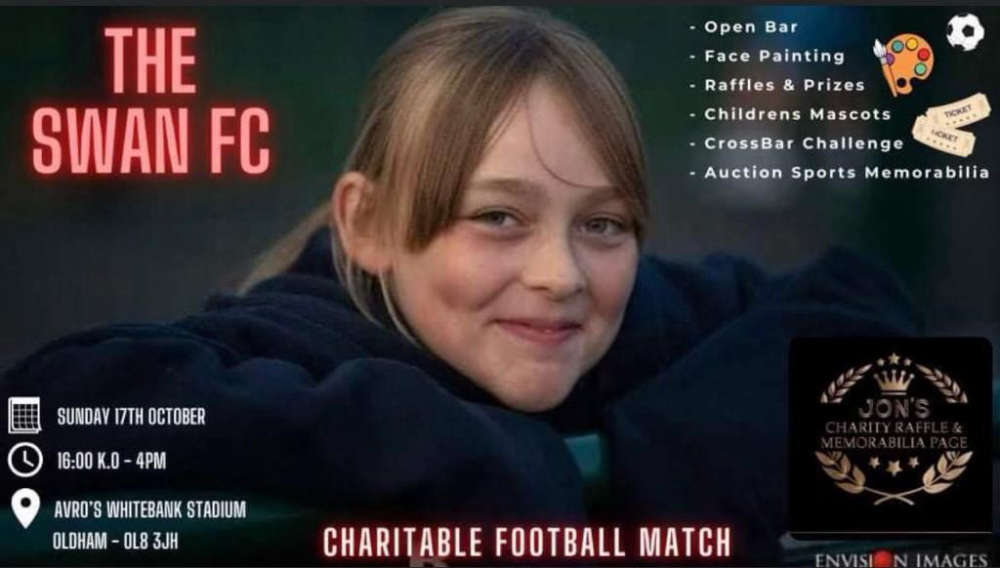 A charity football match kicks off on Sunday (17 October) to help make a dream come true for a brave young girl from Denton.

The match between The Swan FC and Droylsden’s Jon’s Charity Raffles kicks off at 4pm at AVRO’s Whitebank Stadium in Oldham and everyone is invited to attend the family friendly fundraiser.

Twelve-year-old Ruby’s mum Adelle Wright has also set up a GoFundMe page to raise funds to give the youngster a well deserved dream trip to Florida – plus visit the doctors and nurses there who saved her life.

Adelle explains: “Ruby has been to hell and back over and over again. She was first diagnosed in September 2010 with a rare form of cancer called rhabdomyosarcoma in her oesophagus  when she was just 14-months-old.

“She had lots of operations, nine cycles of chemotherapy and 28 sessions of proton beam therapy in Jacksonville, Florida.  Ruby got the all clear in May 2011 and was in remission.

“All was well until December 2019 when Ruby herself found a lump on her sternum.

Brave Ruby underwent a seven and-a-half hour operation in January 2020 to remove the cancer, but also had to have three quarters of her sternum removed as well as some cartilage and parts of her ribs.”

It has been a long journey for Ruby battling back against the cancer and fantastically she has been given the all clear again.

However, her recovery from the operations she underwent continues.

Ruby’s family hope to raise the funds needed for a once-in-a-lifetime trip to Florida to visit Disney and thank the medical teams who saved her back when she was a baby.

The Swan FC – a Sunday league team – took Ruby under their wing to help raise funds for her and will take on the Charity Raffles side.

But as well as the football there will be face painting, a magician, kids characters and a penalty shoot out for the children too.

Ruby, a pupil at St Thomas More RC in Denton, will also sing as the football teams head onto the pitch for the match.

There will also be raffles and a live auction to boost funds on the day and everyone is welcome to go along on the day.

You can also donate to Ruby’s fundraiser at https://www.gofundme.com/f/little-rubys-dream-holiday