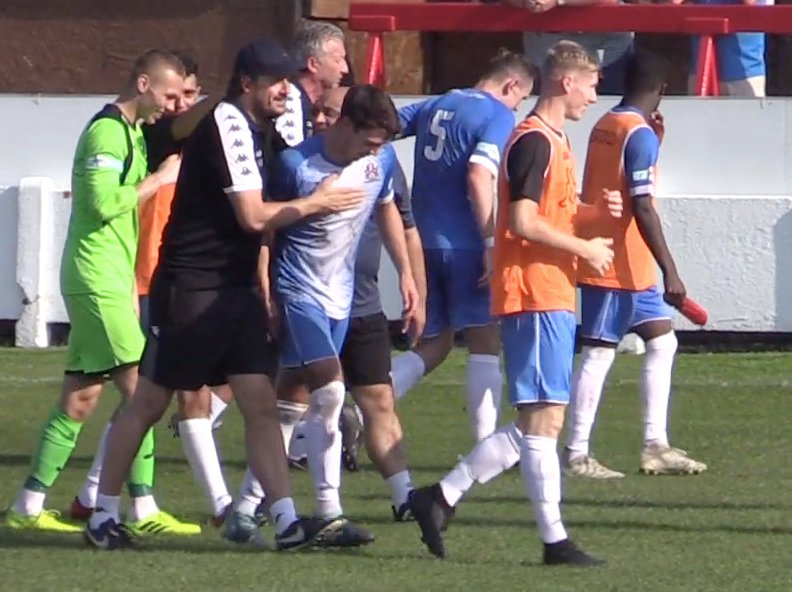 Celtic made the short journey to Ashton United on Bank Holiday Monday and returned with maximum points after a 2-0 victory, thanks to a Scott Bakkor penalty and Craig Hobson tap-in.

Ashton started quickly and Nicholas Clee rattled the cross bar with a stunning strike from 30 yards out. Liam Tomsett then took aim after cutting infield from the right hand side, forcing a good save out of Alex Fojticek. That was to be their only action for the half which was dominated by Celtic.

After eight minutes, Nathan Valentine had the ball in the back of the net however the referee ruled the goal out after an adjudged foul by Scott Bakkor during the build up. That wasn’t to matter however, as Celtic were awarded a penalty on 12 minutes. Scott Bakkor was brought down inside the penalty area and this time the referee had no hesitation.

Scott stepped up to take the penalty but saw his effort saved by Jon Worsnop ,however the rebound fell kindly and Bakkor fired the ball past the goalkeeper to give Celtic the lead.

Celtic did well to pressure Ashton when they were on the ball, forcing the home side to play the ball long. Craig Hobson and Declan Walker both saw efforts at goal saved by Worsnop and his defenders. Ross Dent went close with a header from Walker’s corner and Celtic should have doubled their lead on 31 minutes. Bakkor did superbly to cross from a tight angle down the right hand side, his cross picked out Hobson who powered a diving header towards goal which was excellently saved by Worsnop, keeping the score at just 1-0 as the half-time whistle blew.

Celtic fully deserved their lead and could have been ahead by more.

Ashton started the second half looking for an equalising goal, Steven Tames was picked out by a long ball but Fojticek made a superb stop to deny the striker who had tried to chip the Slovakian keeper.

On the hour mark Celtic doubled their lead. Kengni used this pace to get down the left-hand side, he cut back inside and squared the ball to Hobson who fired the ball past Worsnop, scoring against his former club.

Moments later it could have been three for Celtic. Hobson was through on goal, he slipped but managed to retain the ball and find Valentine however the midfielder's shot didn’t trouble the keeper. Valentine had another chance and saw a powerful volley well saved by Worsnop. After 71 minutes, Mark Lees nearly scored a wonder goal. A clearance from his own half landed just over the Ashton net with Worsnop looking worried.

Ashton continued to look for a goal back and applied some heavy pressure which Celtic managed to deal with. Fojticek made a number of cracking saves to keep Ashton out and the Celtic defence put bodies on the line to persevere our two goal lead. Celtic finished the game 2-0 victors and took a deserved three points home to Bower Fold.