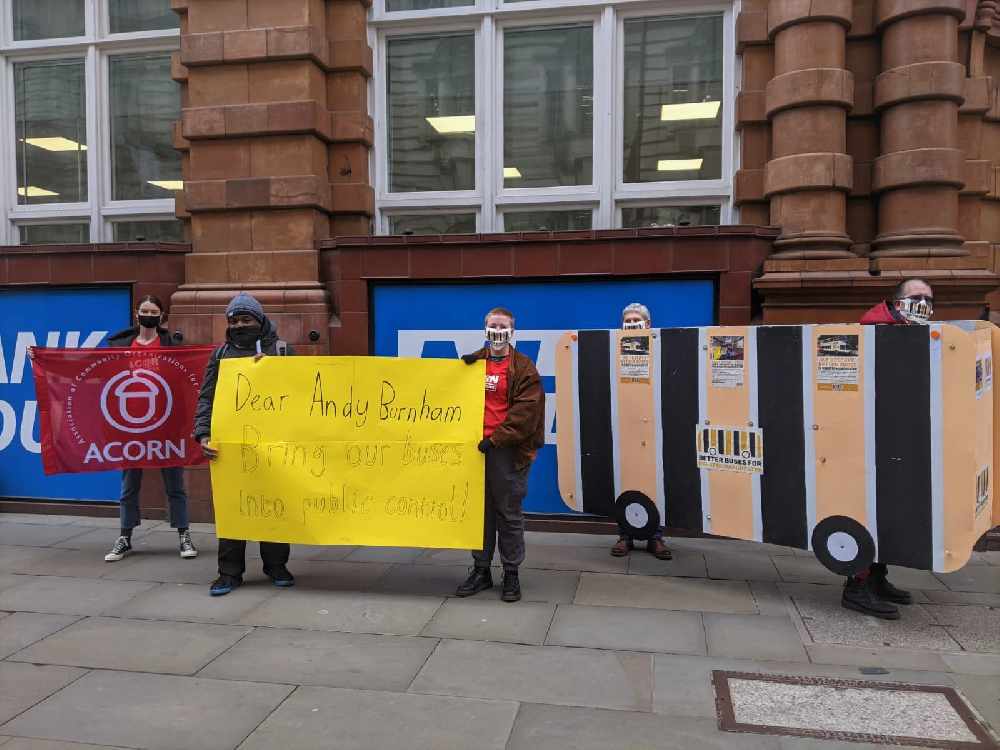 Campaigners have delivered 150 letters to Andy Burnham's office demanding that the Greater Manchester mayor brings the local bus network back into public control.

A group of activists from the Better Buses for Greater Manchester campaign – including two in a giant cardboard bus – took action outside the mayor’s offices on Monday morning (22 March).

The letters, delivered inside a five-foot wide envelope, were written by residents explaining why they want to see a £134.5m London-style bus franchising system in the city-region.

At a one-off meeting on Tuesday, council leaders will recommend that Mr Burnham agrees to introduce a scheme which would see routes, fares and timetable set by local authorities.

A final decision is expected from the mayor this week, despite ongoing efforts by bus operators to challenge the decision-making process by applying for judicial reviews.

Pascale Robinson, a campaigner from Better Buses for Greater Manchester, said bus passengers needed to be at the heart of a ‘world-class, reliable and affordable service’.

“For far too long the people of Greater Manchester have put up with shoddy, unreliable and overpriced buses,” she added.

“We’ve seen routes cut and people being priced off the network, meaning they can’t get to hospital appointments, get to work or see their loved ones.

“Andy Burnham has an opportunity to end this. He could make the decision to bring our buses into public control and transform public transport for the nearly three million people who live here.

“The mayor must make the right call and bring our buses into public control so they can work for passengers, not for private profit.”

Stagecoach, one of the companies mounting a legal challenge against bus franchising, had asked the Greater Manchester Combined Authority (GMCA) to enter into a partnership instead of opting for a franchising model.

The alternative would have seen profits above an ‘agreed benchmark’ shared between the operator, the GMCA and a new investment fund for network improvements.

But transport bosses insist that the bus franchising scheme still represents better value for money, and have asked leaders to endorse the proposals.

Nancy Hughes, organiser for the community union ACORN, said: “It’s unjust that people of Greater Manchester are expected to spend a substantial part of their income on extortionate bus fares to ride unreliable services that don’t properly connect our communities

“ACORN members feel that public transport should work for us, the public, not for profit-driven bus companies.”

Stagecoach and Rotala, the other operator to submit an application for a judicial review, claim that franchising provides no certainty that it will lead to cheaper bus fares.

They have also accused the GMCA of running a ‘flawed’ and ‘unlawful’ consultation that failed to properly account for the impact of Covid-19.

A spokesperson for Rotala said: “It is a risky gamble of the taxpayer’s money to make the decision to franchise without first allowing the court to determine Rotala’s claim and potentially misleading not to include this risk in the report.

“Rotala is concerned that the decision to franchise is being made so rashly for political reasons due to the upcoming election as opposed to the greater good of the bus market.”

Both legal challenges are still with the courts and have yet to be heard by a judge.

Activists from Better Buses for Greater Manchester and Acorn delivering letters in support of bus franchising to Andy Burnham's offices.