Campaign to crack down on knife crime in Greater Manchester 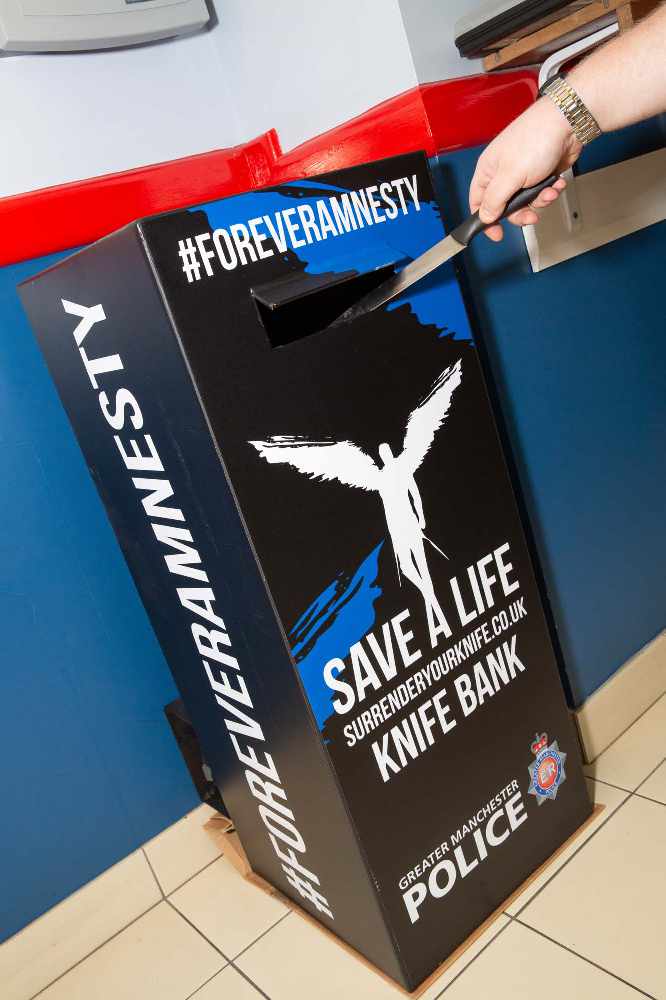 Greater Manchester Police has joined together with other forces as part of a national anti-knife campaign.

This week (Monday 16 – Sunday 22 May), Operation Sceptre – a national police campaign aimed at reducing knife crime – will come to the region.

The initiative will see forces across the country, highlight the risk and consequences of carrying a knife, as well as undertaking a range of operational activity to target offenders.

Some of the supporting activity will include weapon sweeps, visits to habitual knife carriers and visits to retailers who sell knives to ensure they are compliant with the relevant legislation.

Op Sceptre links closely with GMP’s longer-term initiatives aimed at reducing knife crime and serious youth violence – such as operations Sycamore, Concept and the Forever Amnesty. These initiatives have seen over 10,000 weapons seized across Greater Manchester since 2019.

Superintendent Caroline Hemingway, GMP's knife crime lead, said: “Our commitment to tackling knife crime remains a priority throughout the whole year, however this week will see an increase in activity taking place throughout Greater Manchester as part of Operation Sceptre.

“Although this initiative is police-led, we will be working alongside colleagues in the Greater Manchester Violence Reduction Unit (VRU) to identify those involved in knife crime, address the root causes, educate our communities, provide preventative advice, and ensure those carrying and using weapons are brought to justice.

“Unfortunately, knife crime often involves young people and, although most children are not involved in knife crime or any other form of criminal activity, we know that some choose to carry knife for a number of reasons. It may be that they feel vulnerable, threatened and at risk of becoming a victim of crime, or because they believe the majority of their peers carry knives, so they arm themselves for protection.

“Thankfully, it isn’t the case that most young people carry a knife, but it’s important to highlight that when someone does, they are at risk of falling victim and having the weapon turned on them.

“We, the police, can't stop knife crime alone; everyone has a part to play when it comes to tackling the issue. Parents, guardians, extended family members and teachers, can all play a vital role in preventing young people from becoming involved in knife crime.

“With this, I would like to reach out to parents and guardians and ask you for your help. It’s important that you take the time to understand where your children are going and who with, be more curious about what they have in their rooms and in their bags and talk openly to them about the dangers and life-changing consequences that can come from leaving the house with a knife, even if they have no intention of using it. Let them know that they have a choice when it comes to carrying a knife, even if they feel they do not.

“Encourage young people to look out for their friends and reiterate the importance of reporting information. If they know their friends are carrying knives and or are perhaps involved in a dispute, they should tell a trusted adult, be that a parent, family member or teacher. It’s also important to talk to them about how carrying a knife or even their knowledge about friends who carry knives and weapons, makes them vulnerable. There are circumstances where your child could be found guilty of an offence through joint enterprise if they foresaw the risk of a crime taking place.

“Be aware that a young person may be reluctant to talk to you about knife crime, so reassure them that they can be honest with you, as well as letting them know that you’ll listen to what they have to say and support them without judgement.”

To report an incident to GMP, call 101 or talk via LiveChat at www.gmp.police.uk. Always dial 999 in an emergency. Reports and concerns can also be made anonymously through Crimestoppers on 0800 555 111 or via www.fearless.org.

Anyone who carries a knife or weapon is urged to surrender it at one of the 13 Forever Amnesty bins located across Greater Manchester. You can find the location of your nearest bin here.