Burnham: Recent rise in crime can be linked to fans watching Euro 2020 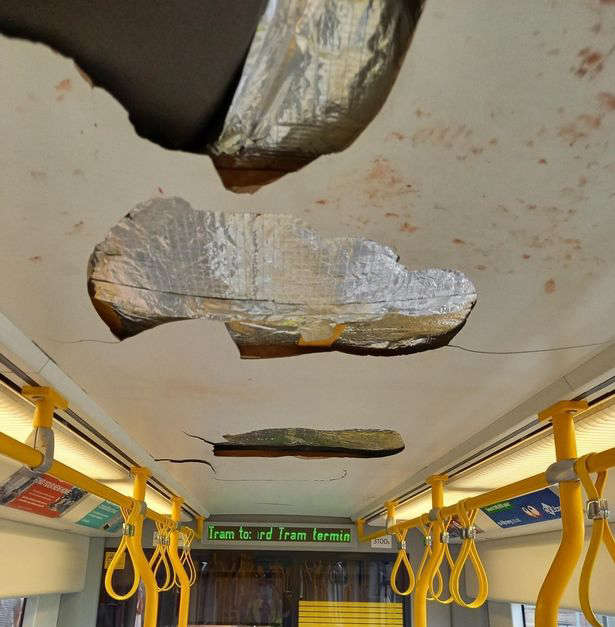 Damage caused to the ceiling of a Metrolink tram after England's Euro 2020 match with Scotland. Image: Transport for Greater Manchester.

A rise in crime in Greater Manchester can be linked to fans watching England's football matches at Euro 2020, according to Andy Burnham.

The mayor says police are continuing to report a ‘huge demand’ for their services ahead of the semi-final against Denmark on Wednesday night.

Extra officers were tasked with riding on the Metrolink during the England-Ukraine game over the weekend to stop a repeat of vandalism during the Scotland match on June 18.

A tram bound for Manchester city centre was badly damaged after a large number of people boarded it at Event City near the Trafford Centre where the match was shown.

The damage to the roof caused the carriage to be taken off the line for repairs, causing disruption to Metrolink services across the region.

When asked if the football – together with the warm weather and the unlocking of Covid restrictions – had contributed to a recent rise in crime levels, he said: “I think it’s all of those things, GMP continue to report huge demand. It is definitely linked to the football.

“I think there is a situation now where the [government’s] announcements of yesterday will bring forward the prospect of people returning to nightclubs, to music events and to the city in greater numbers.

“All of that is good for the city and the economy, but there is a discussion about the return of the usual Friday and Saturday night.

“If I’m being honest with you, there is a concern in the immediate period of both pressure on the police and the NHS, and how we will manage that.

“There is a huge amount of work going on to ensure we do deal with it and absorb it the best way we can.”

Sir Richard Leese, leader of Manchester council, said that the majority of hospitality premises in the city centre were complying with the current Covid restrictions.

While overall crime rates in the city as a whole are slightly above pre-Covid levels, the number of incidents in the city centre ‘are still massively below’ figures reported before the pandemic.

“What happens over the next few weeks might take us back in the direction that we were in previously,” added Sir Richard.

“But at the moment the city centre crime is probably at an all time low actually.”