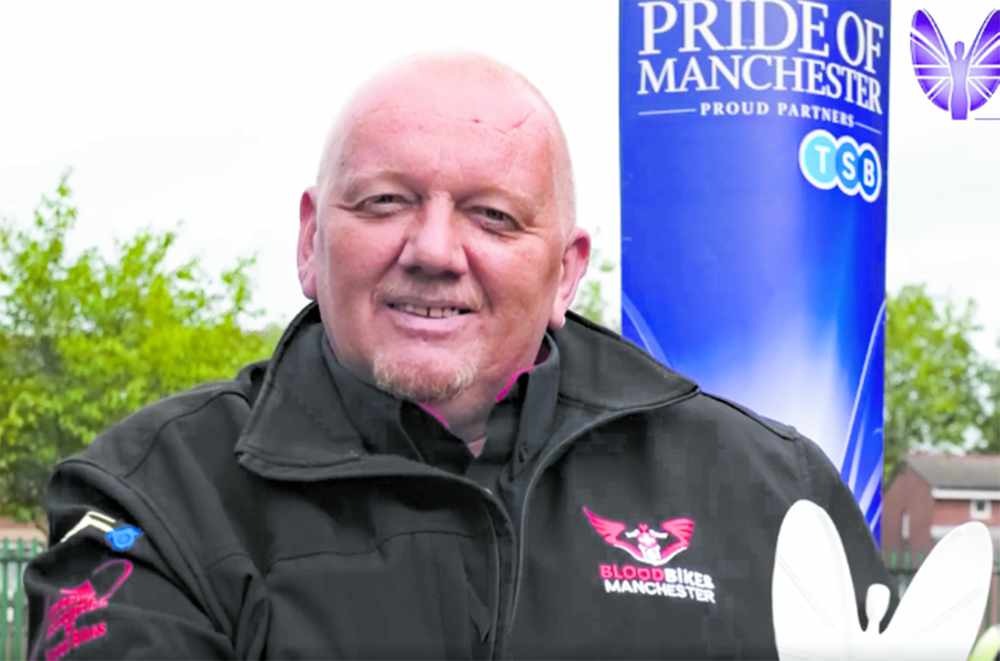 The founder of Blood Bikes Manchester, Paul Redfern, was the recipient of the Pride of Manchester 'TSB Community Spirit' Award last week.

The 50-year-old has made many headlines over the years and heads up the volunteer-led organisation that helps save thousands of lives across the North West by transporting blood, plasma, platelets, vaccines and breast milk to nearly every hospital in the region.

Paul (pictured) organises the group from his Dukinfield Road home in Hyde with the bikers operating mostly at night, at weekends and through the holidays.

The service is provided completely free of charge by the volunteers who all offer their time for no pay or reward, allowing the NHS to divert funds where they are needed most.

However, as Paul points out, during the pandemic the service has been working round the clock.

Paul was one of the unsung heroes to be honoured by last Thursday’s awards.

There could be no glittering ceremony for the event this year of course, so instead the awards were presented in the community and then broadcast on Facebook Live for everyone to watch from the safety of their own homes.

Kym Marsh hosted the awards with many celebrity guests and messages of congratulations along the way.

Paul was presented with the ‘TSB Community Spirit’ award which recognises those who have had a positive impact on the lives of others.

Kym described Paul as an ‘incredibly selfless person’ who has had an impact on literally thousands of lives across Manchester and the North West - and the country.

Paul knows only too well how an urgent delivery of blood can mean the difference between life and death.

When he was just 18 back in 1988 he was involved in a serious motorbike accident and lost his right leg, his life only saved by an emergency blood transfusion.

But years on and harnessing his love of bikes and finding out more about the national Blood Bikes organisation led him to become the driving force behind Blood Bikes Manchester.

Since then, Blood Bikes Manchester is estimated to have saved local NHS and hospice services more than £340,000, completing everything from emergency runs to routine sample runs. They also link up with fellow blood bike groups across nearby counties.

It was a double surprise for Paul who knew nothing about receiving the award, believing he was being interviewed for Granada Reports.

Instead, the news was broken to him that he was in fact being filmed for the awards before none other than Happy Mondays star Bez - who arrived fittingly as a motorbike courier - pulled up to present Paul with his trophy.

Bez hopped off the bike to proclaim: “I’ve got a special award here for you for all the great work you’ve been doing for the people of Manchester. Check that out!”

Filmed for the awards event a very modest Paul said: “I’ve always been one who wants to help people. Times are really tough at the moment and there’s a lot of strain on the NHS and all the other key working services and if we can just give something back that’s completely free of charge to them then we’ve done our job.

“It’s not just me - we’ve got a big team and thanks to all the public too for supporting us.”

You can still view the whole awards event by heading to www.facebook.com/prideofbritain