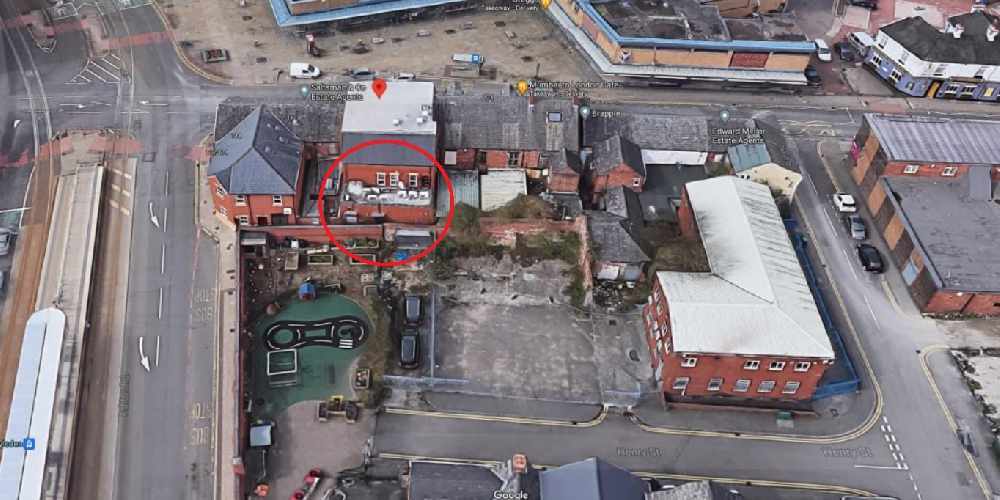 The rear of the Jam Works bar (circled) where the new terrace will be and the school playground. Photo: Tameside Council/Google Maps.

A Droylsden bar has been given permission to build an outdoor terrace, despite concerns from a neighbouring primary school about 'bad language' and litter.

The Jam Works bar on Market Street had applied to Tameside council to create a first floor roof terrace connected to the existing business.

Planning officer Martyn Leigh told a meeting of the planning committee that the bar is part of an established parade of businesses in Droylsden, and backs onto St Mary’s CE Primary School.

Mr Leigh said that the original plans had seen the terrace enclosed in a clear glazed balustrade, but the design was changed after safeguarding concerns were raised.

There had been 16 letters of objection received in relation to the proposal in addition to objections from Councillors Laura Boyle, David Mills and Susan Quinn.

“They principally relate to safeguarding concerns and the relationship with the adjoining school,” Mr Leigh said.

He told members the plans now included a two metre high brick wall around the perimeter of the raised terrace.

In her objection, Coun Quinn said she had concerns about antisocial behaviour from customers using the terrace.

Susan Marsh, chair of the governing board at St Mary’s school, addressed the meeting to speak against the application.

She said: “We do appreciate the plan has changed and that there is no longer a glass wall but a brick one.

“But this doesn’t, however, mitigate the various concerns. This will in effect be almost on top of the school wall, give or take a little bit.

“We’re all adults, we’ve probably all used licensed premises, we know that language tends to get a bit intemperate and louder when people have been drinking.

“That will drift down to our children. And we know that the premises will have staff about but they’re not going to be able to say to people, please don’t swear, please don’t use that word, tone it down.

“Open air is where people smoke and sadly these days often not just tobacco.”

She added that people ‘find it funny’ to throw things, including crisp and snack packets.

“You may think I’m being a little dramatic but we’ve learnt from very bitter experience because on our Ashton Road border there is a bus stop and the wall is actually taller than this one and despite the height of the wall we still have to clean up our side,” Ms Marsh said.

She asked councillors if they would consider conducting a visit to the site before making a decision.

The applicant Darren MacKinnon, from Jam Works said it was a family-owned bar, and the terrace would be covered by CCTV and managed by staff.

“It’s our investment, we live locally so we’re as keen to see this work as anybody else really,” he told councillors.

“We designed it originally with glass and then when the objections came in I looked at them and thought, fair point, so we changed the design.

“It’s mainly a space really for people to have a bit of lunch, a drink.

“It’s more of a chill-out relaxed chatting area, not letting people go out there and do whatever they want to do. We’re going to try and get that as a non-smoking area.

“It’s not about letting gangs of people out there going berserk screaming and shouting. I’m not going to let people run riot on a terrace.

“We’re trying to help Droylsden move forward really because it’s had a lot of bad press for far too long.”

Mr Leigh said the change to a brick wall around the terrace would  ‘adequately address concerns that were raised in response to the original proposal’.

“The application has been submitted to support the viability needs of the business and would obviously complement the existing established use whilst helping to contribute towards the vibrancy and vitality of the town centre,” he added said.

“Officers consider the revised design of the roof terrace extension is acceptable.”

The plans were passed unanimously.