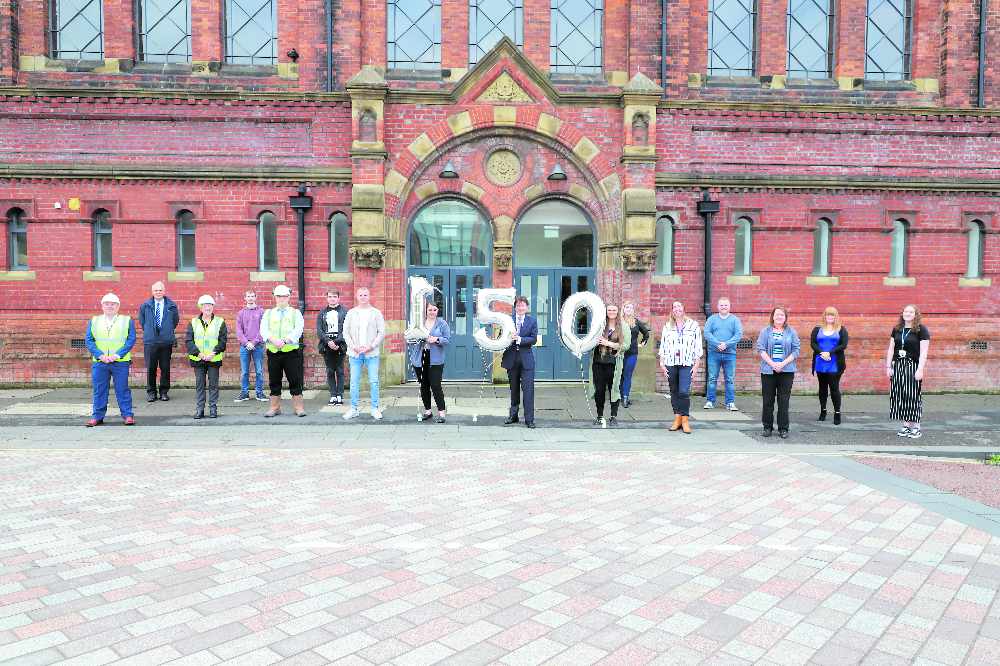 Ashton public baths was first opened on September 6, 1870, with the ladies swimming pool and baths opening a month later, with a separate entrance on Portland Street.

The laying of the memorial stone for the swimming baths was laid in October, 1869, by Henry T. Darnton, Mayor of Ashton; the land was donated by the Earl of Stamford.

Inside, a time-capsule was deposited within a bottle; it contained a copy of a local newspaper, Corporation Manual and information about the ceremony. The architects were Messrs. Paull and Robinson from Manchester, with builders Messrs. T. Clay & Sons from Audenshaw being used at a cost of £16,000 (£1million today). After much effort the Council failed to fund the project from public subscription, and so it had to be paid by the rate payer.

The first Master and Matron was Andrew and Elizabeth Mackereth aged 40 years from Kendal, Westmoreland. They had a son Edwin and daughter Eunice.

Originally there were no changing rooms; dressing took place at the side with hooks and seats underneath a balcony above. The male’s swimming pool was 126ft long by 62 foot wide and the females was 27ft x 15ft.

There were also 21, 1st and 2nd class private baths with hot and cold water. Many people in the area would not have had a bathroom in their homes; a tin bath in front of the fire was used if you could not afford the luxury of attending the bath house.

The swimming pool was filled on Tuesdays but had no filtration system. From Tuesday through to Thursday the charge was more expensive (6d- £1.57 today) but was cheaper later in the week, Friday, Saturday and Monday, as the water would not have been as clean! It was open from 6am till 8pm. 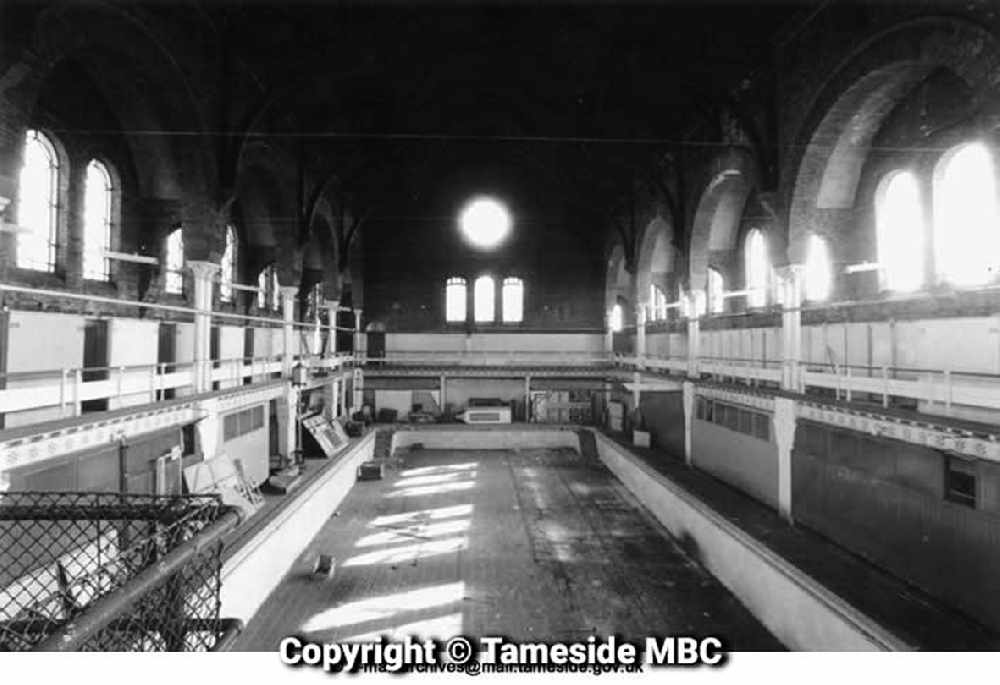 The larger pool that the men used was only open during the summer season, from May to September.

During the winter months the men would use the smaller ladies pool, but on separate days to the ladies, as mixed bathing was not yet the thing to do.

Also during the winter months the larger pool area was used for roller skating. A board was put over the top of the pool and made into a rink.

The room was also used for entertainment purposes with a stage being erected and seating for more than 5,000 people! In the 1890’s it also hosted an exhibition of new inventions including Electric Light. 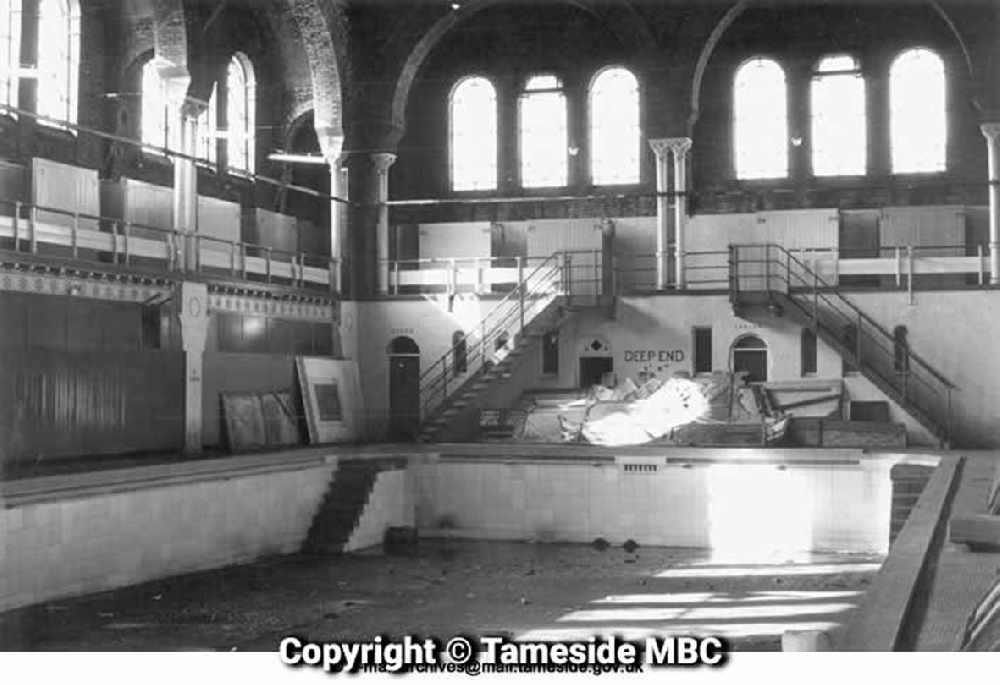 The first swimming gala was held on September 30, 1871, with one also taking place to commemorate the centenary, which was held on  September 5, 1970.

The first recorded minutes of the Ashton Swimming Club are from June, 1881 and their success includes representation at County, Country and even Olympic level, their reputation in the 1930’s  renowned throughout the UK, this also includes the water polo team. Records of the Swimming Club can be found at Tameside Archive Centre DD376.

In 2014, after being closed for 40 years Tameside Council, in conjunction with ‘Oxford Innovation’ made plans to convert the building into office space and a digital hub.

The structure of the building has been kept and the inside lends itself to the heritage, with original architecture, signage and recreated balcony. The building houses digital companies coming under the umbrella ‘Ashton Old Baths’. Affinity Media, Zestme and AM Technology- just a few companies at home there, have fast internet, and is an ideal space for modern business networking.

Staff from the businesses within the Digital Hub gathered for a socially-distanced celebration, complete with balloons, to mark the 150th anniversary of what is one of Tameside's most iconic buildings. 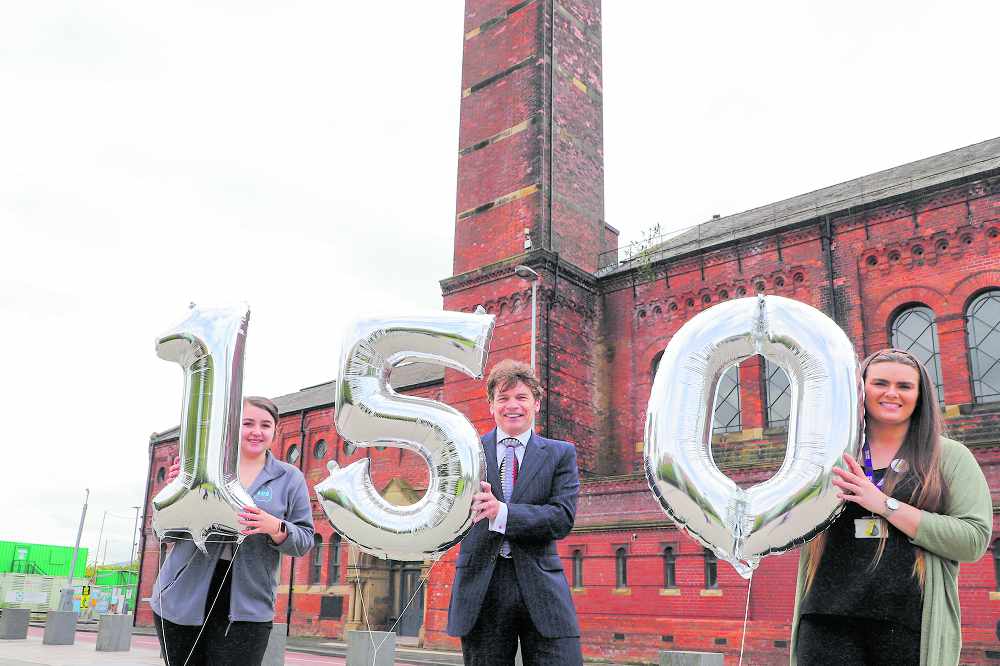 Do you have memories of swimming at Ashton Old Baths? Share your memories on our blog page tamesidesop.wordpress.com