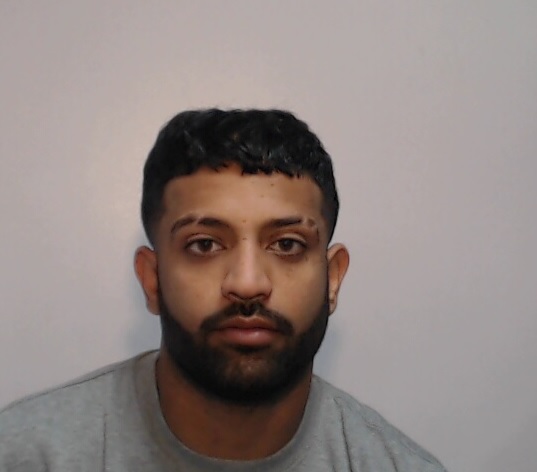 A 26-year-old man from Ashton who subjected a couple to a "terrifying ordeal" when threatening to kill them in their own home has been jailed for five years and three months.

Bahaa Kadum (pictured), of Knowle Avenue, pleaded guilty on Monday (29 March) to one count of false imprisonment and two counts of making threats to kill.

The couple, who live on Apsley Place, were awoken in their house shortly after 3am on 20 October last year to a noise that sounded like a person climbing their stairs.

Startled by it, one of the victims - a woman - headed onto the landing, where she saw Kadum stood in the bathroom urinating in the toilet. She quickly retreated to her bedroom and alerted her boyfriend that Kadum was in their house.

She repeatedly asked Kadum how he had gotten into the house, but ignoring this, he walked downstairs and began to search through all the kitchen drawers before he pulled out the largest kitchen knife in the property.

Kadum then walked back upstairs and informed the woman he was going to stab her boyfriend. Alerted by the sound of Kadum walking up the stairs, the man was able to lock himself in the bedroom whilst Kadum repeatedly banged on the door threatening to kill him.

The man subsequently jumped out of the first floor window and ran to get help.

Kadum chased after the man but failed to catch up with him and returned to the property, where he took the woman hostage and made repeated threats to kill both her and himself.

Whilst this was happening, her boyfriend had run half a mile down the road and managed to get help from a passer-by who was able to call the police, who quickly arrived and arrested Kadum.

Detective Constable Simon Cook, of GMP’s Tameside district, said: “This was a terrifying ordeal for both victims who were left fearing for their life. Thankfully, neither victim sustained any serious injuries that evening but the outcome could have been completely different had the man not been able to flag down a passer-by to alert police.

“Kadum’s behaviour that evening was erratic and abhorrent and he is quite clearly a dangerous individual. Nobody should be made to feel unsafe in their own home so I am glad we have been able to remove this man from our streets and put him behind bars – where he’ll have plenty of time to think over his behaviour.”