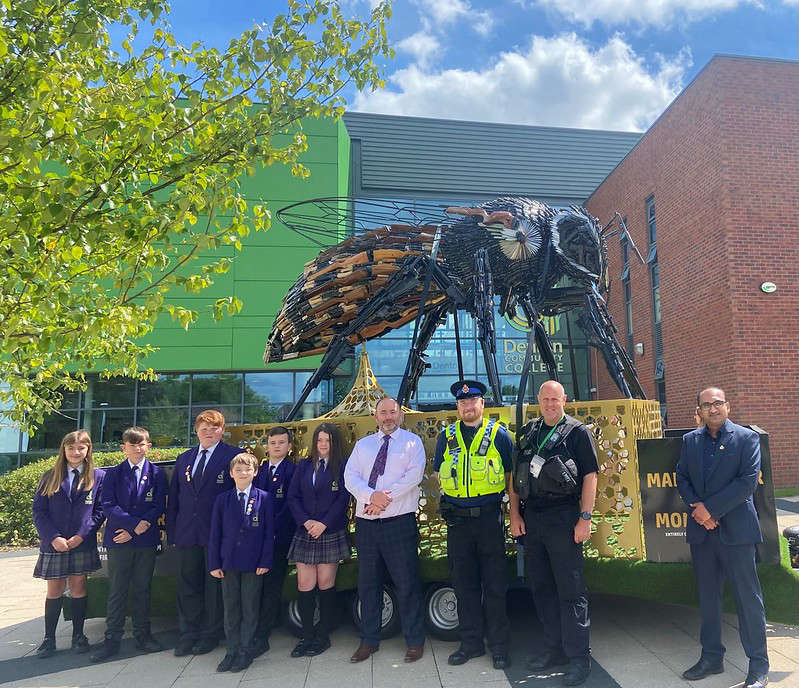 A giant bee sculpture made up of over 1,000 weapons seized in an anti-violence campaign will tour a number of Tameside schools to share a powerful message with pupils.

Tameside Council has worked alongside Greater Manchester Police and the Violence Reduction Unit (VRU), liaising with local schools to arrange for the piece to be exhibited in schools in an effort to educate pupils on the dangers of crime and spark conversations around anti-violence.

The Manchester Bee Amnesty Sculpture is a monument against violence created by The British Ironwork Centre in partnership with Greater Manchester Police (GMP) in 2020 as part of the ‘Forever Knife Amnesty’ campaign.

The enormous statue, standing two metres high weighing over a tonne, is made of reclaimed knives, air rifles and other weaponry seized by GMP.

In addition to the touring installation at local schools, the week of crime action will also consist of educative talks from GMP in schools as well as information stalls and resources to provide children and young people with information and support around crime and violence.

Councillor Vimal Choksi MBE, Executive Member for Towns and Communities with a responsibility for Crime and Antisocial Behaviour, said: “We are committed to educating young people on the dangers of crime and violence and to encourage an attitude of anti-violence in young people.

“The enormity of the statue is a sight to behold and acts as a fantastic education tool to demonstrate the work being done to remove weapons from our streets. I really hope that this installation and week of education inspires students and they gain the knowledge and tools they need on how to report crime and keep safe."