An intense Gaming Finale at JDX 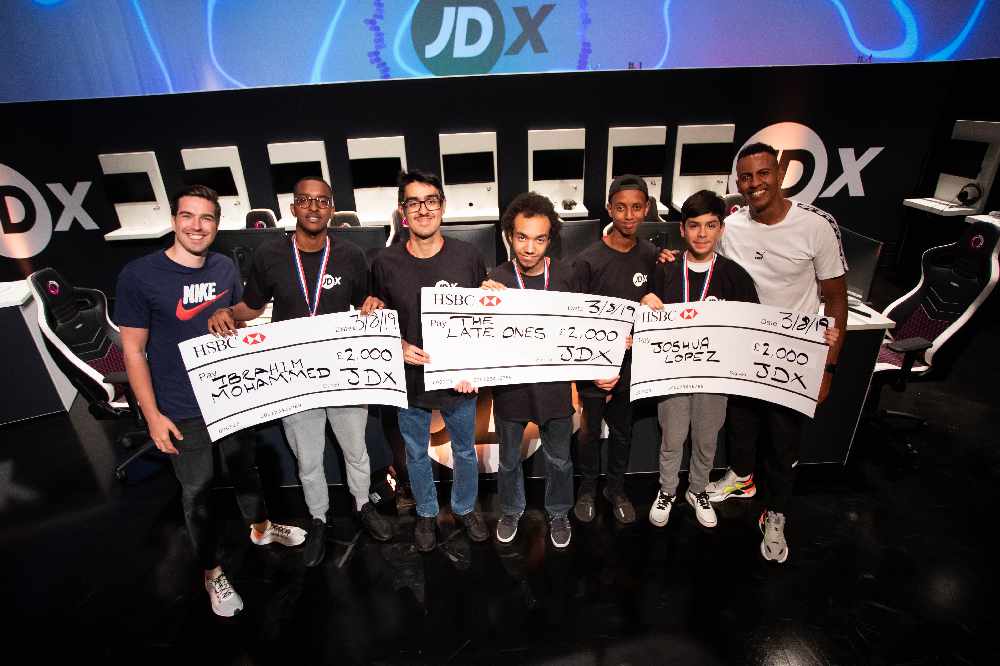 The inaugural JDX Finale came to a spectacular end on Saturday (3rd) with an intense day of gaming tournaments and celebrations.

The inaugural JDX Finale came to a spectacular end on Saturday (3rd) with an intense day of gaming tournaments and celebrations.

Dock10 at Salford’s MediaCityUK hosted an immersive Esports event which saw 21 finalists from London and Manchester come together to battle it out in FIFA 19, Rocket League and Fortnite for the semi-finals and finals of JDX.

FIFA 19 was first up and after three rounds of gaming; 19 year old Ibrahim Mohamed from Wembley became the very first member of Team JDX.

Up next was Rocket League, where three of the best teams from London and Manchester fought for their place in Team JDX. In a tense final, Michael Davies (18) Raghu Rayamajhi (21) and Mustafa Hassan (16) from London, under the team name ‘’The Last ones’’ stole the crown.

Fornite ended the event in a close final but 16 year old Joshua Lopez from Charlton came out on top with the most points after winning his first game and losing his second.

The event was hosted by Kyle Walker and Nikita Buffee and streamed live on Twitch. Spectators, friends and family were able to enjoy a host of activities including retro arcade games, Forza car simulators, football and BMX freestylers and FIFA19 gaming stations.

The event ended with an award ceremony showcasing the winners who will represent JD in Esports. Each received a prize worth £30,000 which included a cash prize of £2,000, a massive haul of gaming prizes including gaming equipment courtesy of HyperX and an expense paid trip to Las Vegas’s Esport’s Arena at the Luxor.

Stephen White, Group Marketing Director, JD said, ‘’Our inaugural event was outstanding and rounded of 3 days of gaming brilliantly. The engagement with players, consumers and locations underlined that our move into esports is exactly the right move for JD. We have raised the bar with our mix of gaming and entertainment. This is just the beginning!”

Chris Bird, Bird Innovation added, ‘’the final event was immense and really emphasised the hard work that has gone in to making JD’s move into Esports happen. It’s the perfect fit and the gamers had a feel for competing on a big scale on the  live broadcast channel twitch, which is great experience for them moving forward.’’

FIFA 19 winner Ibrahim commented, ‘’before I sat down to play I was very nervous but excited at the same time. The event was amazing and the audience were really supportive. When I won, I was so happy and felt really proud; I just wanted to tell my friends and family. The prize is out of this world, I’ve never been to America so I can’t wait!’’

Raghu Rayamajhi, Team Captain for Rocket League’s winning team, ‘’ we did not expect the scale of event when we first walked in, it just felt surreal, and to be hosted by JD is awesome. You only get a production set up like this in World Championships so it really made us work harder for it. I’ve played Rocket League since leaving school but had to stop for while whilst studying at university, I’m so glad all the hard work has paid off! This is a once in a lifetime opportunity.’’

Michael Davis, part of Rocket League’s winning team, ‘’what genius thought of a game that includes cars and football! The Rocket League community is very tight nit but we all support each other. It’s only right that we shook hands with all the runners up and congratulated them too. To win is genuinely mind blowing. I have won a trip to Vegas playing a video game!!’’

Joshua Lopez, winner of Fortnite added, ‘’I am speechless; I never thought I’d be in this position, it’s a miracle! It was really tough but I kept a good mind set throughout and knew I had to get as many points as possible. I played tactical and just kept thinking of Vegas! I really hope this becomes a career for me.’’

Runners up in the competition walked away with an exclusive invite an online event, a cash prize and swag bag of gaming goodies, courtesy of partner HyperX.