An enormous bridge between Oldham and Tameside could be built 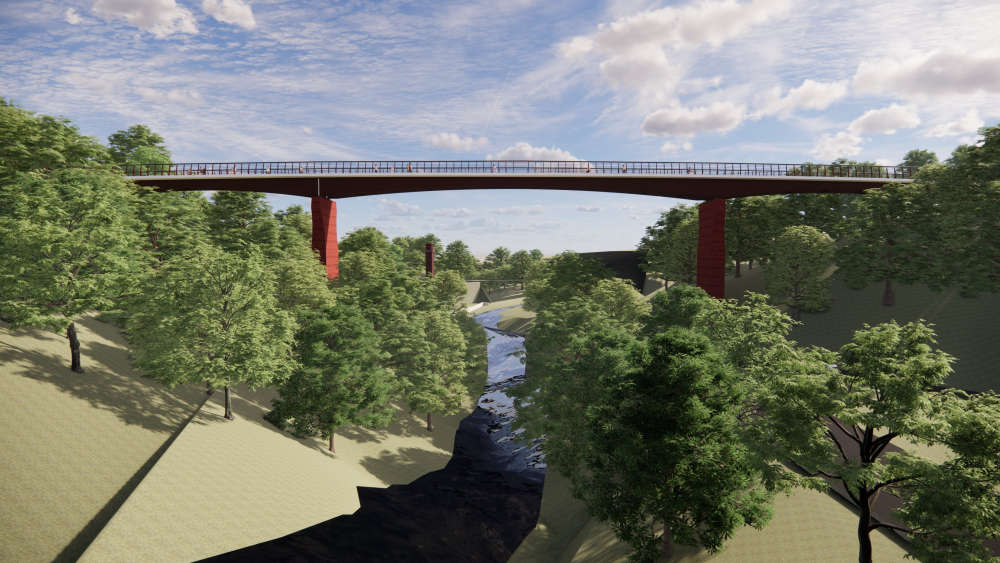 The plans for the new Park Bridge between Oldham and Tameside. Image: Oldham Council.

Plans for a £5 million bridge between Oldham and Tameside which would stand higher than six double-decker buses have been lodged.

Oldham Council has submitted an application for the 128 metre-long bridge across the Medlock Valley in Park Bridge.

It would run along the route of a historic brick railway viaduct and is aimed at making the borough easier to traverse for cyclists and walkers.

Currently walking and cycling routes between Oldham and Ashton-under-Lyne on the national cycle network do not meet Bee Network standards, according to the planning application.

This is because walkers and bike riders have to take a ‘steep’ one kilometre diversionary route through the Medlock Valley which is not ‘accessible to everyday cyclists or those with a buggy or mobility issues’.

The Bee Network, has been designed to improve travel across the city region by encouraging more people to leave their cars at home and use specifically designed safer routes.

Oldham’s local authority is aiming to secure funding for the bridge’s construction from the Greater Manchester Mayor’s Challenge Fund for ‘active travel’.

The structure, which would stand more than 30 metres above the ground at its highest point, could open within ‘the next couple of years’ if no hurdles are encountered, bosses say.

The design aims to provide ‘spectacular’ views across the valley and a new access point to the Northern Roots site – planned as the UK’s largest urban farm and eco-park on land at Snipe Clough. 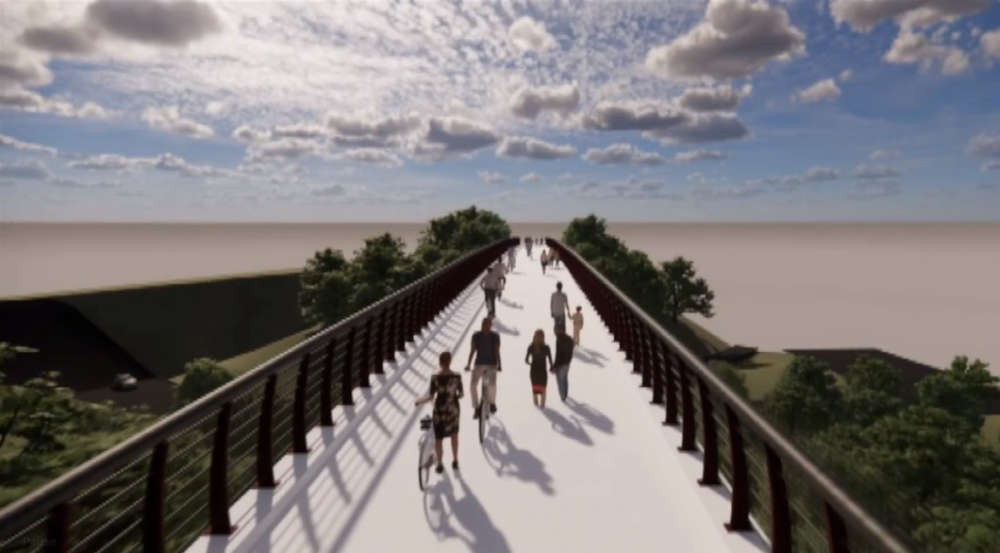 The plans for the new Park Bridge between Oldham and Tameside. Image: Oldham Council.

Chiefs say it will create a ‘new landmark within the Medlock Valley and Park Bridge, which celebrates the local landscape and industrial heritage of the area’.

It will be built out of steel girders which would weather over the years to provide an ‘industrial look’ in line with the borough’s heritage.

The project would also include an upgrade and paving of several hundred metres of an existing part of the Oldham Bardsley recreation route.

And a new footpath and cycle path running around 200 metres from the southern bridge landing point on the Tameside site would also be created.

“The proposal will restore a crossing where the railway viaduct once stood, creating a flat, easily navigable direct route between Oldham and Ashton-under-Lyne which connects to these existing footpaths,” the planning documents state.

Oldham council staff have been working with Transport for Greater Manchester (TfGM) and Tameside Council on the bridge proposal.

Council leader Amanda Chadderton said: “This bridge, which would be funded with Greater Manchester money, would make it far easier for people wanting to walk or cycle between Oldham and Tameside as well as, in the future, providing a great new route to Northern Roots.”

She urged people to leave comments on the through the planning portal or council website.

The application will be decided at a future meeting of the planning committee.