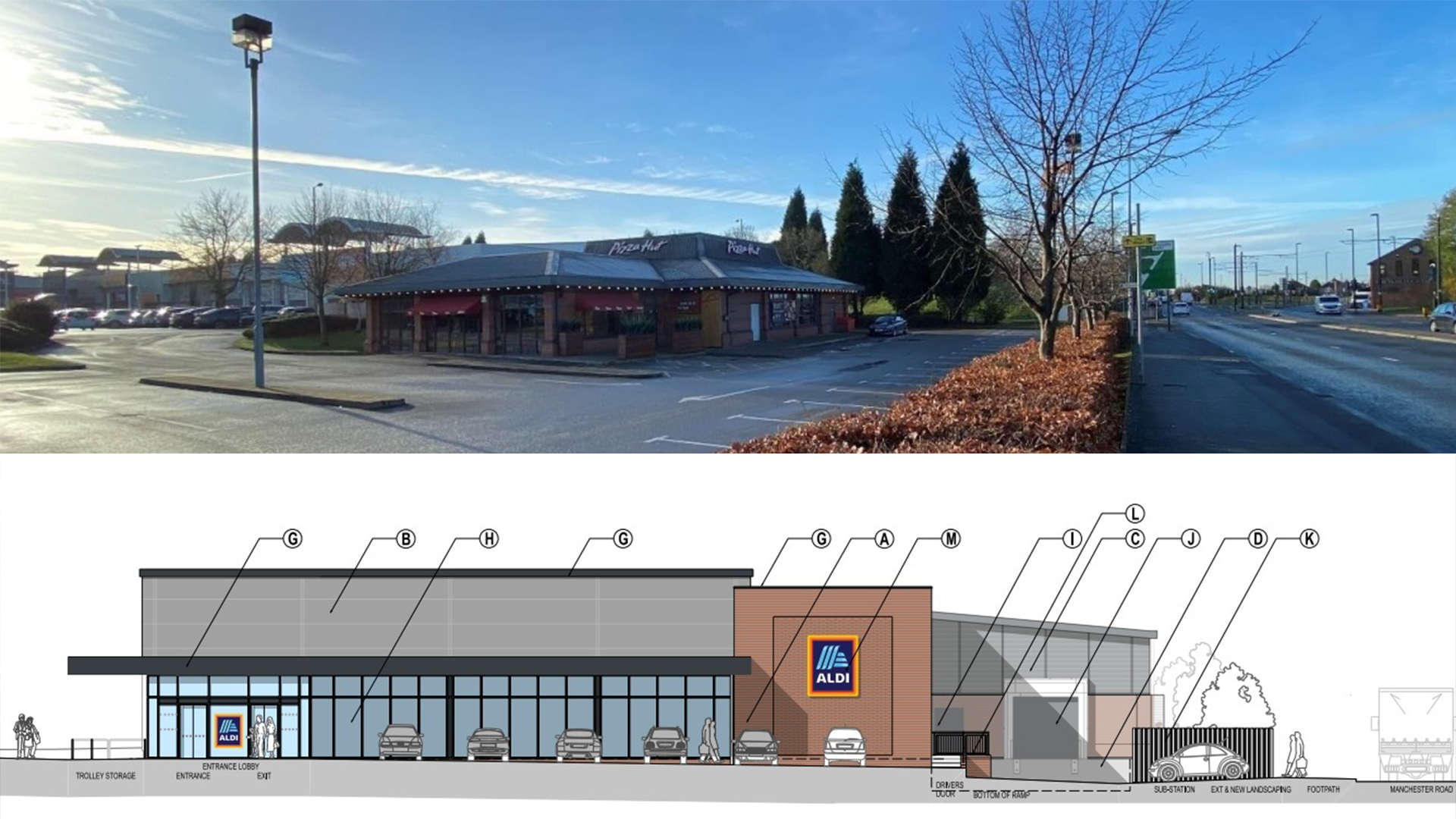 The Pizza Hut which would be knocked down and replaced with a proposed new Aldi in Ashton.

Plans for a new Aldi store in a busy Tameside retail park have been recommended for refusal over concerns of congested roads and an 'uninspiring design' – but the company says it will appeal.

The discount supermarket chain had applied to the council to build its fifth foodstore in the borough at Snipe Retail Park in Ashton-under-Lyne.

This would have seen the existing Pizza Hut and former Carphone Warehouse stores demolished to make way for the supermarket, which would have covered nearly 2,000 sqm.

There would have been 85 parking spaces provided, and it was proposed to realign the internal road layout and close off an existing access from Manchester Road, with access reopened on the ‘left in’ turn off Manchester Road with Snipe Way.

However 120 letters of objection had been received over the plans, and Transport for Greater Manchester had objected on grounds of highways safety and concerns over the local capacity.

Tesco had lodged its own objection, as had New Era Properties who are marketing a site in Droylsden for a discount food operator.

The local highways authority had also raised issues and recommended that the application be refused.

Aldi told the council it had received around 50 letters of support from members of the public, although the town hall says it has not seen these responses.

Other objections state that ‘traffic is already a significant problem and the supermarket will place extra pressures on the road system’, which people living in the Snipe Estate already struggle with.

“The retail park is a significant bottleneck at present with not enough parking to meet demand,” they add.

Objectors say that the current retail park is overused and has already had a ‘catastrophic impact’ on the surrounding residents.

The application is due to be decided at a meeting of the planning committee on Wednesday – and Tameside planning officers have recommended it be refused.

In their report planning officers say that the building design of the proposed Aldi is considered to be an ‘uninspiring and dominant structure’, and would represent a ‘strong departure’ from the character of buildings in the area.

“The development would fail to contribute positively towards local identity and distinctiveness and fail to establish a strong sense of place,” they add.

This has led to ‘significant levels of local congestion’ with queues at times reach all the way down to the M60 exit slip road.

The council says there have also been a number of car and pedestrian accidents reported in the area of Manchester Road, and the congestion is directly responsible for local air quality issues.

Both the highways authority and TfGM say that the revised transport proposals put forward by Aldi would not be enough to resolve the impact on the traffic network, pushing the junctions to operate beyond capacity.

“The resultant congestion upon the surrounding network would be unacceptable and the application has failed to demonstrate that they can be appropriately mitigated,” the report states.

Bosses also say that there is a site at in Droylsden town centre which would be more preferable and suitable for the store; something that Aldi disputes.

Aldi says it has undertaken ‘significant work’ in the area to identify potential sites for a new store, but says that none – including Droylsden Shopping Centre – meet its operational requirements.

It confirmed that if the plans are rejected it will appeal the decision.

A spokesperson for the company said: “A new Aldi store at Snipe Retail Park would bring significant benefits to the area.

“It would create new jobs, unlock investment in the site and provide unbeatable value groceries for local shoppers, which is now becoming even more important for many people.

“The officers concerns do not justify rejecting the proposal and consequently losing the benefits that can be realised.

“There is no other site suitable in the local area for a new, modern food store and the investment from Aldi would greatly improve the quality of the site.

“We believe rejecting this application would be wrong, not just for local people, but the borough as a whole. Local people have told us they want to see a new store here and we will continue to fight for them.”

Councillors will vote on whether to approve, reject or defer a decision on the application at a meeting at Guardsman Tony Downes House on Wednesday (16 February).