Wild leaves Mossley on a high 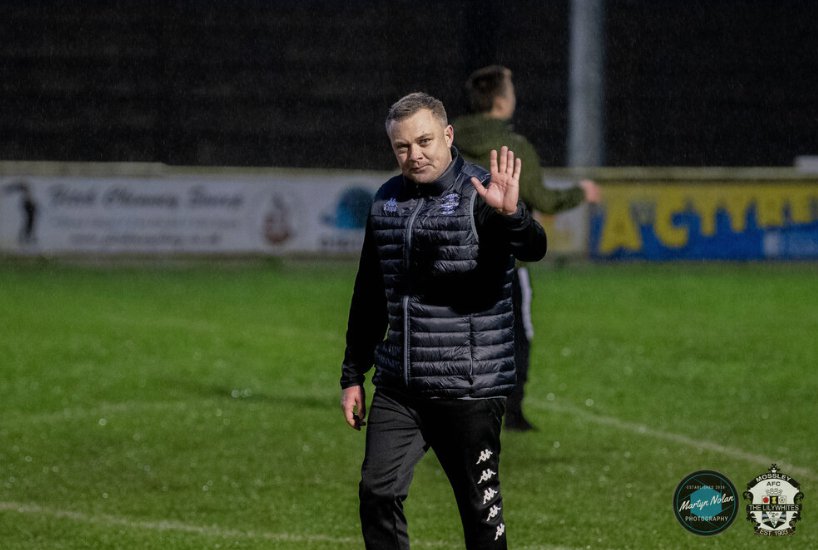 Substitute Jes Uchegbulam scored a superb second half winner to ensure Dave Wild's last game in charge ended with a win over play off chasers Marske United at a damp and windy Seel Park on Saturday.

Marske are clearly a very good side and Mossley had to work extremely hard to secure the victory, but work extremely hard they did. This, despite being hit by injury to keeper Theo Roberts which saw rookie Curzon Ashton keeper Liam Lovell loaned in. Lovell, who isn't 18 until March did very well in keeping a clean sheet on his senior debut.

The Lilywhites opened brightly and Ben Halfacre almost broke the deadlock as early as the fourth minute but his powerful left foot drive smacked against the left post.

As the game settled Marske began to dominate possession but flowing football was difficult in the swirling wind and Mossley's defensive performance was excellent with Keil O'Brien and Dec Evans stand out performers in the heart of the Lilywhites defence.

On the occasions when Marske were able to get shots away Lovell did well to make a couple of good saves and Marske were also denied by the woodwork when Arran Wearmouth's effort cannoned off the underside of the Mossley bar.

There was little goalmouth action after the break. Marske pressed hard but couldn't find a way through but the Lilywhites had a secret weapon. On 76 minutes minutes Andy Keogh found himself near the right touchline and the Lilywhites skipper played a delightful through ball that substitute Uchegbulam raced onto to reach the ball before the advancing keeper and cleverly clip the ball home at the near post for what proved to be the winner.

Mossley had a strong penalty appeal ignored minutes later when Keogh was flattened in the box and Marske broke away and almost scored with Keogh still down with a head injury. Dave Wild was yellow carded for his protestations.

Marske applied some late pressure and Evans headed a goal-line clearance to preserve Mossley's lead but the visitors ran out of ideas and Mossley, despite conceding a lot of possession against the play off chasers, were worthy winners for their gritty and determined display to give departing boss Wild the perfect send off.