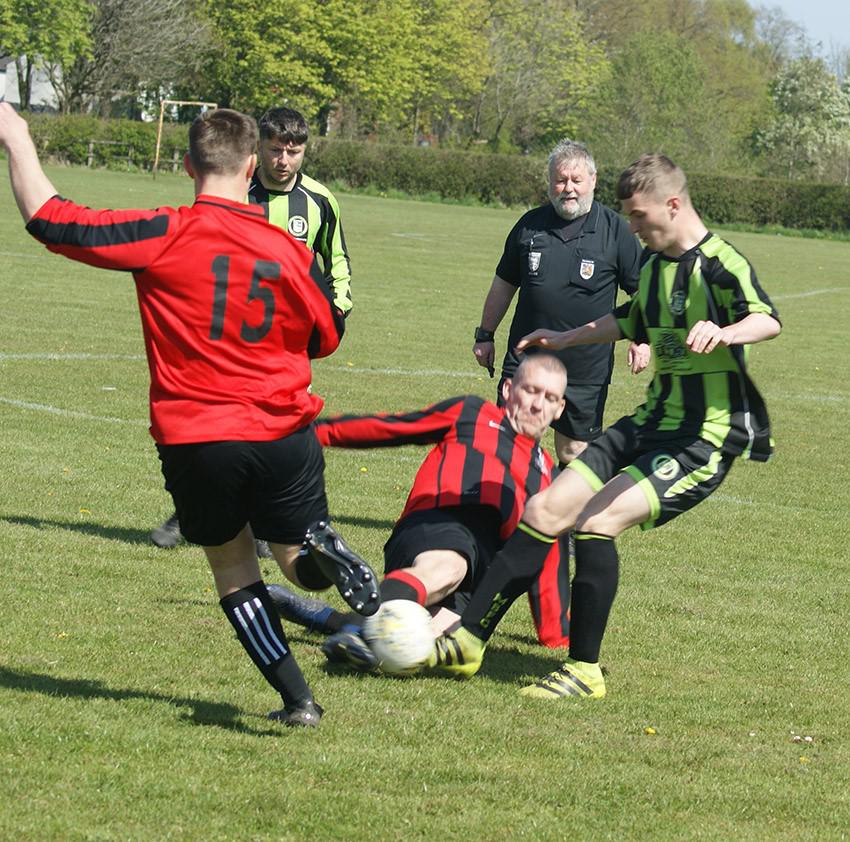 Here's our weekly review of the action in the Lancashire and Cheshire Amateur Football League, courtesy of Geoff Garnett.

After an opening round of group games in the four cup competitions saw some games fall victim to snow the last two weeks of beautiful sunny weather has seen the competition for quarter-final slots looking to be red hot in the final two rounds of group action.

Some teams are within touching distance of reaching the last eight in their cups but the battle to join them looks set to go to the last kick after another great day of goals and upsets.

In the Rhodes Cup for teams in the Premier and division one Dom Doyle look to be well on the way with a big 7-3 win over Trafford United taking them three points clear of three other teams in Group A.

Rochdalians stated their claims in the group with their first game seeing them demolish Bury Ams 8-0 who stay level with them and non-playing Irlam Tigers.

Division one high fliers Moston Brook top Group B with a maximum nine points after winning a superb game with De La Salle Reds by scoring the only goal.

Next up are Didsbury, two points adrift after another close 2-1 win over AFC Oldham.

Group C provides a real battle to the finish as Mellor, who led the Premier division with a 100 per cent record prior to the lockdown, enjoying their first game in the competition as they cruised to a 5-0 win at group leaders Urmston Town.

South Manchester stay in second spot despite losing out 4-2 hosting Radclyffe. Rhodes Cup holders Salford Vics are also back in the mix after a convincing 4-0 win over Dukinfield Athletic.

Their nearest challengers are Manchester Polonia who won a nerve-jangler by 4-3 against Abacus Media.

Stretford Paddock will also be battling to the end after an emphatic 4-0 win over Signol OB keeps them in the mix.

The Wray Cup for teams in divisions two and three sees Group A having Wythenshawe Wanderers within touching distance of the last eight as 2-0 win over South Manchester reserves kept up their 100 per cent record and gives them a very healthy four-point lead.

Next up are draw specialists Bedians who drew 2-2 with Hattersley to keep both teams in the mix.

The other game was also deadlocked at 1-1 between Stoconians and Abacus Media reserves.

Sale Amateurs kept up their relentless path in Group B with a 3-0 win over Elton Lib Hargreaves.

The margin of victory was reduced by some splendid goal keeping by the Elton keeper including a penalty save and also then from the follow-up from Sale scoring legend Danny Harwood.

A great finish from Stjon Clement and a spectacular strike from Luke May put Ams in firm control and Harwood atoned for his spot-kick miss with a late tap-in to seal victory.

Non-playing Signol Athletic stay in second spot, three points behind with a game in hand and Village Manchester stay in touch after an emphatic5-1 cruise over Didsbury reserves.

It’s tight at the top of Group C with Shaw Athletic and Woodhouse Juniors level on eight points with the decisive game between them to come.

Shaw accounted for Aldermere 4-1 while Woohouses had to work hard for a 3-2 win over Old Stretfordians.

There was great delight for Hooley Bridge Celtic who recovered from a pointless start to their campaign with an exciting 6-3 derby win over Santos.

Just two games in Group D with Chadderton Cott keeping their slender lead at the top as they shared six goals with Mellor reserves and Stoconians reserves moved into second spot with another big 6-2 win at Stretford Paddock reserves.

In the Whitehead Cup for teams in divisions A and B Group A leaders Flixton JFC stay a point clear of non-playing AFC Stockport as they were held to a 2-2 draw by Deans.

A 2-1 win for Trafford United reserves over Bury Ams reserves keeps them in touch with the top two.

It’s tight in Group B with just a point between the top three teams.

Hot on their heels are Spurley Hey after a 6-3 win at Dukinfield Athletic reserves and Mellor thirds after a comfortable 5-1 win over AFC Oldham thirds.

It keeps them two points ahead of Irlam Tiger Rangers who beat Aldermere reserves 2-0.

The other game saw Old Strets reserves delighted to post their first win in the competition by 3-1 over Moston Brook reserves.

It’s all to play for in Group D as the top two were both held to 2-2 draws, Hillgate by Moston Brook thirds and Kartel at AFC Oldham reserves.

No problems for Salford Storm as they enjoyed their first win of the competition by 7-2 at Milton reserves.

In the Hellawell Shield for teams in divisions C and D Shaw Athletic reserves are nearly there as they walloped Rochdale Galaxy 8-0 to stay three points clear of AFC Stockport Warriors, who have a game in hand, and Irlam Tiger A.

Warriors won 3-1 at Deans reserves and Irlam eased to a 6-3 win at Stoconians thirds.

It’s very tight in Group B as Salford Storm reserves are three points clear of the other four teams with a 3-1 win at Bury Ams thirds.

Whalley Range stay in third spot after securing a points in a 2-2 draw with Village Manchester reserves.

went nap in a 5-1 victory over Stoconians fourths to stay in second spot three points adrift of Storm.