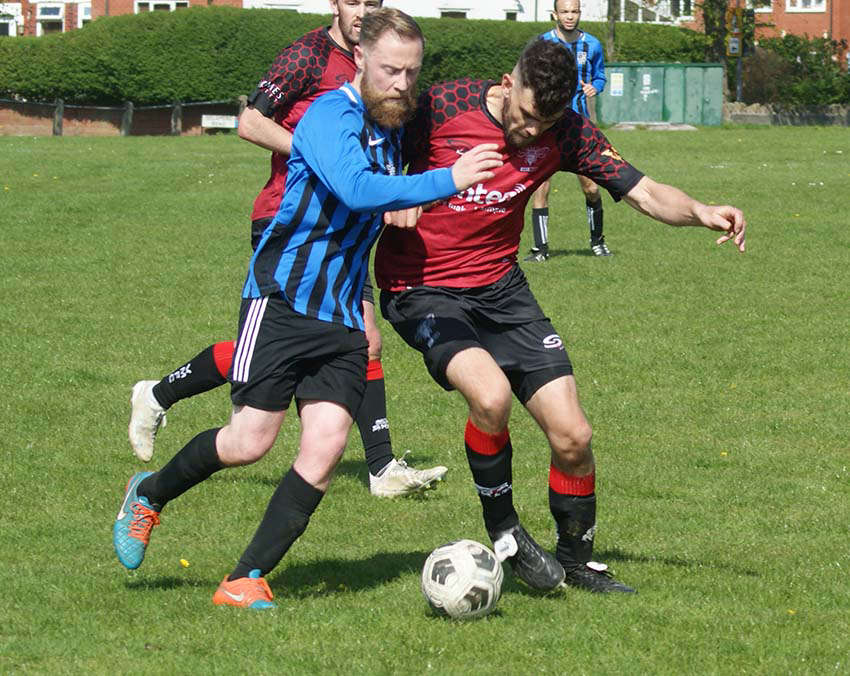 The L and C and the LAL have been playing representative matches against each other since 1921 and that latest one at the Lancashire FA ground in Leyland was a special occasion as the team played for the John Howard Trophy 100 years on.

John played a great part in the history of the L and C for over 60 years in many roles before his death in 2021 and was a true legend of the L and C and amateur football.

It was the first game between the leagues for three years due to Covid restrictions and the L and C put on a great display of team work, attractive football and team spirit to be worthy 3-1 winners and do themselves, the team managers, their clubs and the league great credit with the quality of their play against spirited opposition from the LAL.

It was even-steven for the first 35 minutes before the LAL broke the deadlock with a great finish from 25 yards.

The L and C upped their game to create plenty of chances and got their reward just before the break with a penalty converted by the outstanding Jack Ward (Moston Brook).

They kept up the momentum in the second half with the seamless introduction of substitutes, who maintained the high standard, and one of them Sheldon Casey (Shaw Athletic) gave the L and C a deserved lead with a clinical finish after a sublime set-up by Jack Ward.

The clinching third goal came on 74 minutes from Connor Berry (Moston Brook) after another assist from Jack Ward.

More chances were created backed by solid defending, well organised by skipper Jack Bostock (Moston Brook) to see the team over the line as deserving winners of the coveted John Howard Trophy.

The clubs providing players for the team were Moston Brook, Stretford Paddock Abacus Media and Shaw Athletic managed by Dave Haughton and Mike Treanor with all of the players enjoying the experience of playing for the league and giving a great display of their talent.

There was limited but important action in the league programme with many teams now having completed their season.

Both the Premier and division one have completed their league fixtures but in division one teams are competing for the Harry Jack Cup.

Semi-final action saw Signol Athletic go through to the final with a hard-earned win 2-0 win over Didsbury.

The other game saw Bury Ams enjoy a comfortable 5-1 win over Shaw Athletic.

The battle for the division two title is still wide open as Hattersley beat Stretford Paddock reserves 7-4 to keep in touch with leaders Irlam Tiger Rangers.

Baguley Athletic are third after a comfortable 5-0 win at Newton and shared the spoils 1-1 in a midweek local derby with Wythenshawe Wanderers.

The other Saturday game saw Mellor win 4-2 at Bedians.

The division three title was decided in dramatic fashion as Village Manchester visited Aldermere knowing that they to win by nine clear goals to overtake long-time leaders Chadderton Park.

Village were on fire from the kick off led by Ed Asaman who netted four times with Chris Telling, Dec Moran, George Mardoukoutas and Jack Hayes also on target to see them leading 8-0 with six minutes left to play.

An over-anxious Village missed two gilt-edged chances before their nerves were settled by a strike from Dan Hodgson and their joyful day was completed as Ed Asaman completed a naphand to set up suitable celebrations.

The other game in the division was a much more sober one with Hooley Bridge Celtic and Salford Albion both unable to hit the target.

Kartel SC moved the top of division A with a midweek 4-1 win over Milnrow Firgrovia but Salford Storm are hot on their heels with a 2-0 derby win at Salford Vics reserves.

Storm showed their intent with an emphatic 7-1 win at Stretford Paddock Development who shared four goals with AFC Oldham reserves in midweek..

Santos got back on the winning trail with a 3-0 derby win at Milton reserves.

They took the lead with a first-half strike from Ben Marshall and Ciaran Finegan and Tom Slater added two more after the break.

Heaton Mersey have enjoyed a great second half to the season in division B, after losing their serial draw tag, and completed it with a fine 7-1 win at Greater Manchester FC reserves to clinch the runners-up spot behind Aldermere reserves.

The other games saw Hillgate win 4-3 at Parrs Wood Celtic and AFC Oldham thirds enjoyed a 4-1 win at Flixton JFC.

It’s going down to the wire in the race for the division C title as a big 8-1 win for Mellor reserves at Village Manchester reserves put them a point behind Dukinfield Athletic with a game to play.

It was much closer in the other games in the division with midweek draws between Salford Storm reserves Bury Ams reserves 2-2, and Altrincham Hale and AFC Stockport Warriors 3-3 and Warriors winning their Saturday game by 2-1 in a local derby with Stoconians reserves.

The final game of the day saw Altrincham Hale reserves draw 1-1 with a gutsy Didsbury reserves.