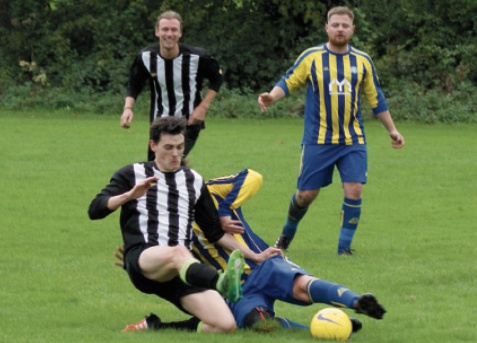 As the weather relented, there was virtually a full programme of games with the bulk of the action being in county cup competitions.

The forthcoming penalty shoot-out proved to be a real marathon, before Range lost out 13-12.

Milton were also involved in penalty shoot-out drama after sharing six goals at Read United, but Milton kept their nerve to progress, winning the shoot-out by 3-2.

The shoot-outs continued at Elton Lib Hargreaves, who drew 1-1 with Ribchester Rovers, but lost the shoot-out by 4-3.

There was no joy either for Rochdalians, who drew 3-3 at Trawden Celtic but lost 3-2 in the shoot-out and Bedians went down 3-0 at Old Blackburnians.

In the Manchester Challenge Cup, Trafford United put some indifferent league form behind them to come from behind to beat Hollinwood 3-2.

Hollinwood had taken an early lead through Martin Booth before Nathan Bradley drew United level from the penalty spot.

Hollinwood regained the lead, but United finished in style with a thrilling 3-2 victory.

There was plenty of action in the Manchester Amateur Cup, with one of the top games coming at Chorltonians reserves who took on Division Two table-toppers South Manchester seconds in a thrilling local derby.

South were in control for long periods and went into the latter stages with a 4-2 lead, before Chorlts bounced back to lead 5-4 going into injury time.

South had the last word with a last-minute equaliser to bring on the shoot-out that saw both teams convert their first five kicks.

South missed their sixth attempt and Mike Rafferty kept his nerve to fire in the winner for Chorlts.

There was no joy either for South’s first team, who could only manage a consolation from Jaye Rushton as they went down 6-1 at Heywood St James.

Division One leaders Radclyffe suffered their first defeat of the season, losing out 3-1 at FC Unsworth, Old Stretfordians were beaten 5-1 by Mersey Valley and Swinton went down 6-3 at AFC Middleton and Urmston Town went down 3-2 to Eastlands.

Going into the hat in the next round are Trafford United reserves who scored the only goal of their game with Newton, AFC Oldham who accounted for local rivals Oldham Vics 5-2, Manchester Polonia who won 3-0 at Flixton Juniors and Irlam Tigers who beat Chadderton Park 4-3 on penalties after a 3-3 deadlock in normal time and Barr Hill crushed Manchester Wanderers 10-2.

Village Manchester are through with a comfortable 3-0 win at Heaton Mersey and Moston Brook reserves accounted for Chorltonians Athletic 4-2, but Salford Vics seconds were knocked out 4-0, hosting Brownley Albion.

Deans were in local derby action against Beechfield United reserves and lost 4-3 in a thriller.

The final team through were Irlam Tigers Rangers, who joined their first team in the hat after a fine 6-3 win over Heywood St James reserves.

Action in the Premier Division was limited to two games, with High Lane winning a close contest with Salford Vics by 3-2 and Abacus Media won 5-3 against Mellor to keep both teams in the top half of the table.

There were no games in Division One and in Division Two, North Walkden suffered their first defeat of the season by 2-1 at Stoconians.

There were also wins for Dukinfield Athletic by 5-3 at Mellor reserves and Santos by 4-2 at Rochdalians seconds.

Another close game saw Signol Athletic win by the odd goal in seven at home to Aldermere. It’s tight at the top of Division A with four teams locked on 10 points, with leaders AFC Stockport going down 4-1 at Mellor thirds.

A 2-1 win for Waterloo reserves at Wythenshawe Wanderers took them into the top four and Dukinfield Athletic reserves were celebrating after posting their first win of the season in style, beating Rochdale Galaxy 9-2.

Parrs Wood Celtic extended their lead at the top of Division B to six points with an emphatic 4-1 win over Spurley Hey seconds.

Chadderton Cott seconds were held to a 2-2 draw by Hillgate, who picked up their first point of the season and Moston Brook thirds were comfortable 6-3 victors at Stoconians thirds.

There were four games in Division C and it’s neck and neck at the top after both Chadderton Park reserves and Salford Storm reserves both won.