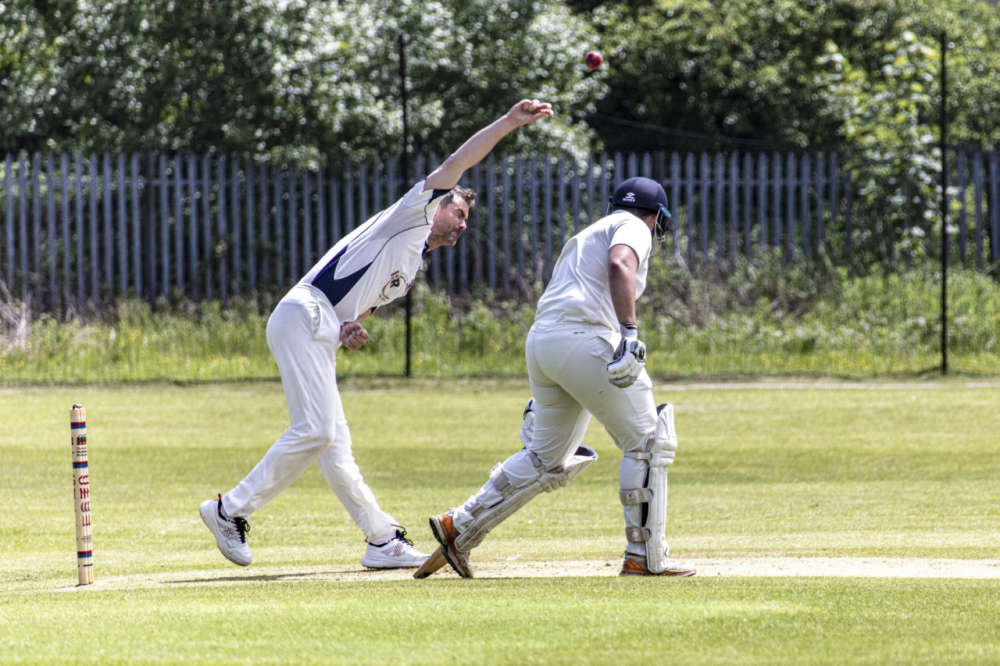 Jubilee weekend saw a full programme and with seven weeks of the season gone it is remarkable that not a single scheduled Premier, Championship or Regional League game has fallen victim to the elements.

Locally Denton West, Hadfield and Ashton top their respective divisions with a third of the campaign now completed.

Table toppers Denton West made the short trip across town to Denton SL and maintained their 100% record with a 50-run win over their near neighbours. West batted first and reached 168-3 with 10 overs left thanks to Callum Flynn, (66), Aaqib Uppal, (36) and Rohail Nazir, (51). A sizeable total looked the cards, but they collapsed, losing their remaining seven wickets for 22, as DSL pro Damitha Silva and Mark Selby took four wickets apiece. DSL would have been more than hopeful of the win especially after reaching 54 without loss inside nine overs. Wickets fell regularly from that point as Uppal stepped up.  He finished with an impressive 7-41 as only Silva, (31), offered much resistance. DSL finished on 140ao.

The win for West, coupled with a second defeat of the campaign for Woodbank, extended their lead at the top to seven points, with the 2021 runners-up DSL now standing in mid table with four wins from seven games.

Flowery Field maintained second spot with a win over visiting Heywood, and with leaders Heaton losing for the first time the gap has been narrowed to two points. Flowery batted first and pro Shreevats Goswami shone again.  His 82, backed up by an unbeaten 51 from Bradley Edge was the cornerstone of Flowery’s 267-8.  Heywood replied well and standing at 182-2 with 12 overs left were probably marginal favourites.  Adam Bardsley, (4-45), and Goswami, (3-41), then took control and the visitors added only 24 more, leaving Flowery winners by 61 runs.

Glossop fell to defeat for the third time in four games as they were well beaten at Bradshaw. A four-man Glossop attack struggled against the home team, who finished on 255-9 setting the North Road side just over five an over for the win. In the reply Chris Gill fell to the first ball of the innings, and that set the pattern. They subsided to 73 all out and defeat by 182 runs.  The result leaves Glossop in mid-table with three wins and four defeats. 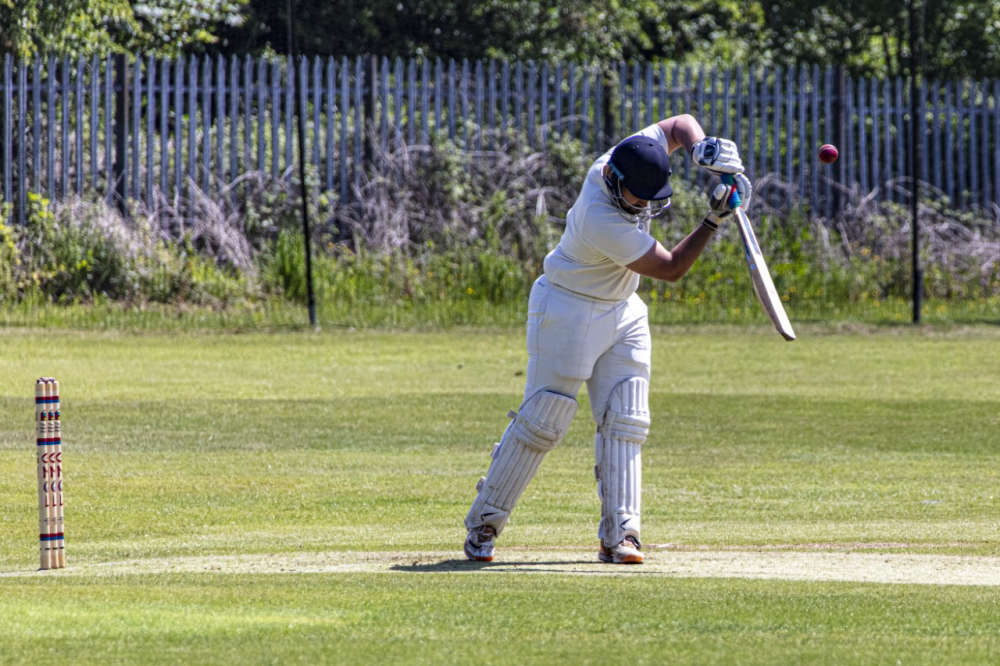 A high scoring game at Mottram saw the home side put up a decent display as they chased visiting Elton’s 281-7.  On his first appearance for Mottram, the Littleborough pro Travis Townsend certainly made an impact.  He picked up 5-60 and then in the reply showed the class which has seen him as a prolific scorer at a number of Clubs.  He got 116, and with support from Ryan Fitton and Oliver Andrew took Mottram to 186-3 before being dismissed.  Despite some late resistance from Jay Riley, (35) Mottram’s chase ended 27 short and they now lie a place below Dukinfield in ninth place.

After a decent start to the season Dukinfield are struggling to find form and fell to defeat for the fourth consecutive weekend, as they went down at home to Swinton Moorside. The visitors reached 209-7, and Dukinfield may well have been disappointed with that after reducing them to 97-5.  An unbeaten eighth wicket partnership of 68 proved to be the key to the game. Dukinfield had little answer in reply and tumbled to 71-7.  Some late resistance from Jonny Gascoigne, (65*), helped them reach 178ao.

Hadfield made it six wins from seven games as they beat Uppermill comprehensively.  They gave the visitors a torrid afternoon in the field as Tom Conway led from the front. He finished agonisingly short of three figures, falling on 97.  There were half centuries for both Rick Tranter, (65) and Jonny Tranter, (56), and despite former Lancashire bowler Kyle Hogg picking up 5-67 Hadfield finished on 276-7. The visitors had little answer to Louis Van Zyl, (5-26) and folded for 109ao, leaving Hadfield victors by 167 runs.

Droylsden are in superb form and got their fifth win as they defended 178 with ease at Edenfield. Hashan Gunalitha is in prime form and his 69 left Droylsden setting the hosts 179 for the win.  Three early wickets put Edenfield on the back foot and with Lewis Jarvis, (5-32), making regular inroads they finished well short on 117ao. The two results left Hadfield top closely followed by Droylsden who are just four points behind.

Stayley won for the fourth time when they visited Austerlands.  Batting first Rhys Downend, (40), made the major contribution and with five other batsmen reaching double figures they ended on 183-9. The home side had little answer to Faisal Zeeshan.  He ran through them, taking 7-39, leaving Austerlands all out for 131, and a Staley victory by 52 runs.

After a disappointing start Micklehurst have picked up and made it four wins in five games as they chased Glodwick’s moderate 130ao.  It was a tight run affair with the margin of victory being only three wickets. Glodwick slipped to 31-5, but rallied to add another 99, as Rizwan Hussain took 4-52 for Micklehurst.  At 56-2 in reply a comfortable win looked on the cards, but the regular fall of wickets left them on 101-7 and the Richmond Hill team were indebted to Kyle Clayton who took them over the line with an unbeaten 33.

Denton fell to a sixth consecutive defeat this time at the hands of neighbours Denton SL, who got their first win of the season.   It was a nail gripping end to the game.  DSL batted first and posted 177-9 and after falling to 101-7  Kian Clough, (46), and Sam Hood, (36*), rallied things and they ended on 177-9, (three wickets each for Andy Mather and Manzoor Hussain).  Ethan Illingworth shone with the ball in Denton’s reply.  His return of 5-61 left the home team struggling at 110-7, but late resistance saw Denton inch towards the target. It came down to the last ball.  Denton needed three for the win but fittingly it was Illingworth who had the last word.  He bowled Mather and DSL took the points by the fine margin of two runs.

Denton West lost for the first time this season, and with Werneth beating Oldham the Coppice team head the table.

Ashton remain at the top of the table with seven wins from seven games, but they made hard work of the victory at bottom placed Springhead.  Richard Taylor once again shone for the Rayner Lane team.  He finished with 142, (his second ‘ton’ of the campaign), and it was a measure of his display that the next highest scorer was ‘extras’ on a Springhead pitch which offered very little bounce. Taylor now has 361 runs averaging over 60.  The Springhead reply collapsed to 54-6, (Siraj Kadodia 4-41), but then a seventh wicket partnership of 127 put the home side back in the game.  It remained in the balance before Ashton captured the last two wickets and won by 11 runs.

Ashton Ladysmith got the better of Dukinfield. They totalled 177ao with a steady performance through the order, seven batsmen reaching double figures, (three wickets each for Trevor Hyde and Mike Graham for Dukinfield).  Their reply reached 133-4, (Simon Collins 40), and at that point were favourites, but in the face of Waqar Nisar and Khaliq ur Rehman, (4 wickets each) they fell away, adding only a further 12, leaving Ladysmith the winners by 32 runs.