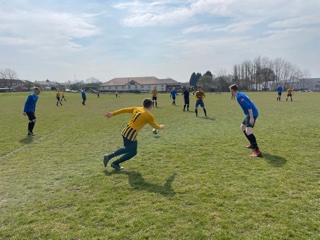 Glossop Wasps will not be joining the European Super League. Yet, two stunning goals any leading European club would be proud of - scored by James Wilson and Tom Kay - in either half saw the Wasps claim a dominant win at Failsworth on Sunday, as they keep up the pace with Shawdale at the top of the table.

Despite a relatively uneventful start, the Wasps did have George Dyson to thank after he made a great last-ditch tackle inside the opening ten minutes to deny Failsworth an opportunity to find the breakthrough.

As this was the visitor’s first league fixture since their return to action, any rustiness was understandable however as the first-half wore on Sol Lester’s side seemed to be shaking this off, gradually growing in confidence and taking control of proceedings.

First, Kay took a great first touch in the box to open up the chance for him to have a powerful strike at goal, which was well saved by the Failsworth goalkeeper. Sam Wilson was also thwarted by the goalkeeper at close range after he attacked the ball well following a wonderfully floated corner delivery by Damon Worsley.

Approaching the half-an-hour mark, Wilson took aim from a tight angle, forcing the goalkeeper into another save. Just moments later, on 32 minutes, Wilson had another go, this time breaking the deadlock with a moment to savour as he fired a sensational knuckle ball into the back of the net from distance.

Then came on opportunity to double the lead before half-time, when Wilson, who had been causing havoc for the opposition down the left flank, was brought down in the area and the referee pointed to the spot. Wilson stepped up to take it but was denied a second as the goalkeeper guessed right.

The Wasps and Wilson picked up where they’d left off, starting the second-half brightly in attempt to provide a cushion in the score line. After going close on numerous occasions, the hosts then proved why Lester’s team couldn’t afford to be complacent, as they began to regain some momentum and notably threatened to equalise with a smartly worked effort which was placed narrowly wide of the post.

Fresh legs were soon brought on to help nullify the threat of an equaliser, Stephen Thrilwell and Will Needham being brought on to replace Worsley and Adam Barton as part of a double substitution.

Just over ten minutes after entering the fray, Needham almost got himself on the scoresheet in style, controlling the ball expertly under a challenge, working it onto his left and looping the ball towards the top left, still, the score remained the same.

Not for too much longer though, Kay putting the game beyond the home side inside the final ten minutes with a Messi-esque solo run and finish. Although he picked up the ball with nothing seemingly on, he appeared to have just one thing on his mind as he accelerated towards goal, evading a host of defenders before coolly slotting home.

Still, there was time for some late drama as tensions boiled over and an altercation shortly prior to the final whistle resulted in a sending off for each side.

This excellent result leaves the high-flying Wasps in second place, level on points with first placed Shawdale FC in what is shaping up to be and exciting title fight.

Next up they’re in cup action, facing Hyde, Oldham & District Division One leaders, AFC Railway, in the Rose Bowl Trophy.