Tribute Match Hits The Back Of The Net 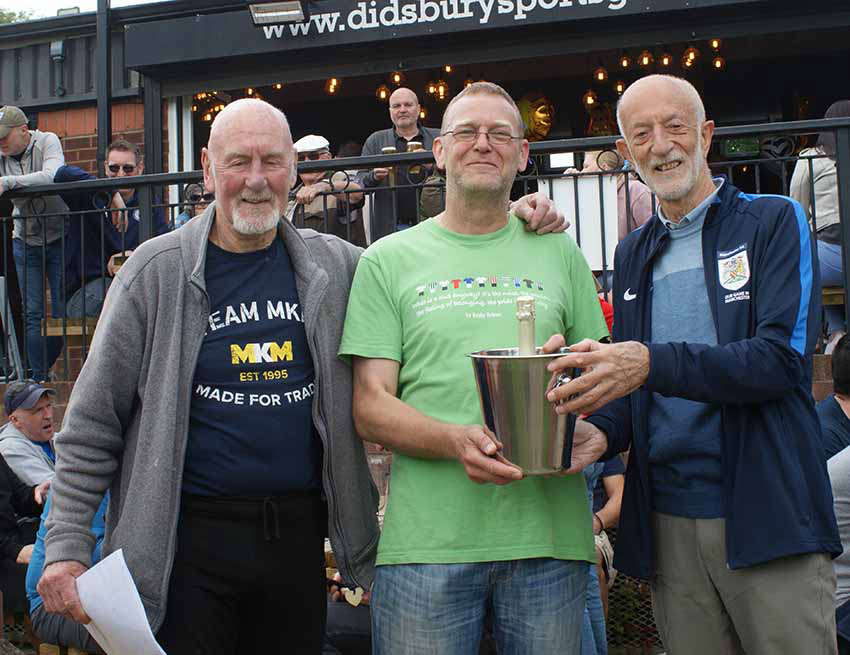 Many old memories and friends were remembered at Didsbury FC in the second annual tribute match in honour of Ross Fowler and Mick Marchington.

The game was contested between Didsbury Over 45s and Under 100s Burnage Metro, in honour of Ross and Mick as well as any other team mates no longer with us.

One of the main organisers was club legend, 83-year-old Mal Maginn, who was President of the Lancashire and Cheshire AFL in 2009/2010.

Mal played in goals for the first 15 minutes and said that he pulled off a superb save – which no-one saw it was so quick.

Mal said: “There was a great turn out of players and spectators in a robust game and the Didsbury Over 45s won 4-2 but it could have gone either way.

“On the day we made £30 profit after paying for the buffet and pizza, which will go to a charity, either East Cheshire Hospice or a Ukraine donation.

“Unfortunately, we could not locate the trophy, so improvised with champagne in a container and L and C official and club friend Keith Marsden presented it to the winning captain,  and overall it was  a great day out which we hope will be repeated annually now.

“Thanks again to everybody who turned up.”

Match referee Steve Deighan added: “I just want to say a personal thanks to everyone who turned out yesterday and a special thanks to Malcolm for keeping the memories of us all alive and kicking, and those that we have lost on our own personal journeys.

“It was a brilliant day again and a right laugh, we even had VAR for the first time in the history of our great historic club - and it worked.

“Thanks to our camera man Paul Lilley and the sound advice he gave me....’Well Brian thought it was off-side, so in that case it must be...(hilarious) as I worked on my Square image seen on TV far too many times these days .”

“So, let’s make this an annual event.”

“A special mention to Keith Marsden and Geoff Garnett whom I’ve known in excess of 25 years and who are highly respected members of the L&C and the amateur game around our pastures and who always support our great club and history.”

For more information and to keep up-to-date with the latest developments, head to landc.org.uk