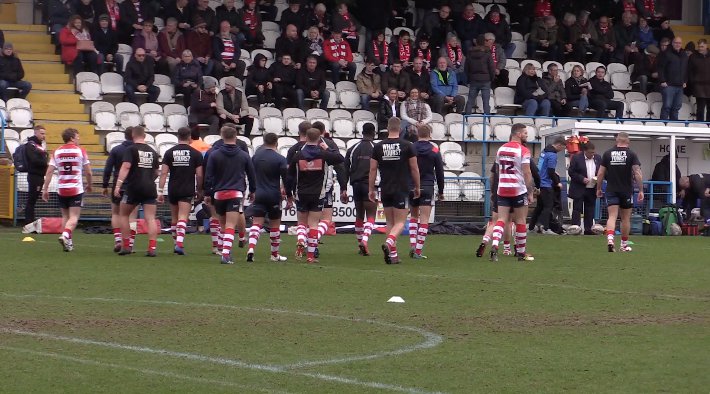 ANY win in Cumbria has to be lauded and Sunday's 16-14 triumph in awful conditions at Whitehaven --Oldham's  second in the last three games up there --- was especially creditable considering the weather, the heavy pitch, Storm Dennis, the number of young players who stood up to the challenge and the pressure on both sides in terms of the importance of two league points.

Roughyeds returned home on a bus that was full of banter, laughter and mirth --- what a difference a win makes !

There were no happier men on board than club chairman Chris Hamilton and head coach Matt Diskin, though for outwardly showing emotion and exuberance it's hard to beat Matt's No 2 Brendan Sheridan and physio Chris Melling, himself a former player of some repute.

As ever, Matt was looking ahead to potential improvement with feet firmly on the ground and a balanced view of his side's performance.

He saw it like this: "The effort from every man in the side couldn't be faulted. Full marks to each and every one of them for that. We made hard work of it, to be honest, and what we did in the second half was how not to close a game out.

"We were undisciplined and we made a lot of errors, but we picked up our first league points of the season at a place that is notoriously difficult to come to and full credit to the lads for all their hard work and determination.

"A lot of graft and a lot of commitment earned us our first league points and I don't want to take anything away from the lads for what they achieved --- what we all wanted and needed, a win.

"Some of the effort was a bit misdirected and we have plenty of things to work on but it's a tough place to come at the best of times, let alone in atrocious conditions when it was particularly difficult in the first half kicking into the wind.

"We've been practising and working on producing free-flowing rugby but in these conditions it had to be old-school rugby and we're just happy to come out on top.

"The bottom end of the ground was really boggy and coming out of that end in the first half really took it out of us because there was 'give' of between two and three inches.

"In the second half we should have played the field a little bit better than we did and that was one of the things in which we could have been a bit smarter.

"As far as the battle up front was concerned the plan was to have the middles changing the direction of attack and when we did that we caused them problems. We stopped doing it though and played into their hands a bit in the second half by going one out.

"Nevertheless, an ugly win is a lot more enjoyable than a pretty loss.

"As the grounds firm up and the better weather comes  we will be able to play more like we want to play. We practice playing good rugby and hopefully the weather moving forward will allow us to show a little bit more of that."

Club chairman Chris Hamilton, invited to speak about the game to a full-house hospitality suite, said: "Both teams targeted this game as one with which to kick-start their season and, oddly enough, both played better against the wind.

"To be honest it could have gone either way, but we are obviously delighted it went our way because not many teams will come up here and take anything off you.

"Oldham and Whitehaven have a lot in common and we wish you all the very best in hopefully staying up, with us, this season."

He said: "We produced lots of effort but there are several areas in which we can improve. Our pass selection, for instance, was very poor and we had enough chances to win, but we  didn't take them.

"Oldham didn't ask a lot of our defence. Their first try was the direct result of a ricochet and their second was a penalty try."