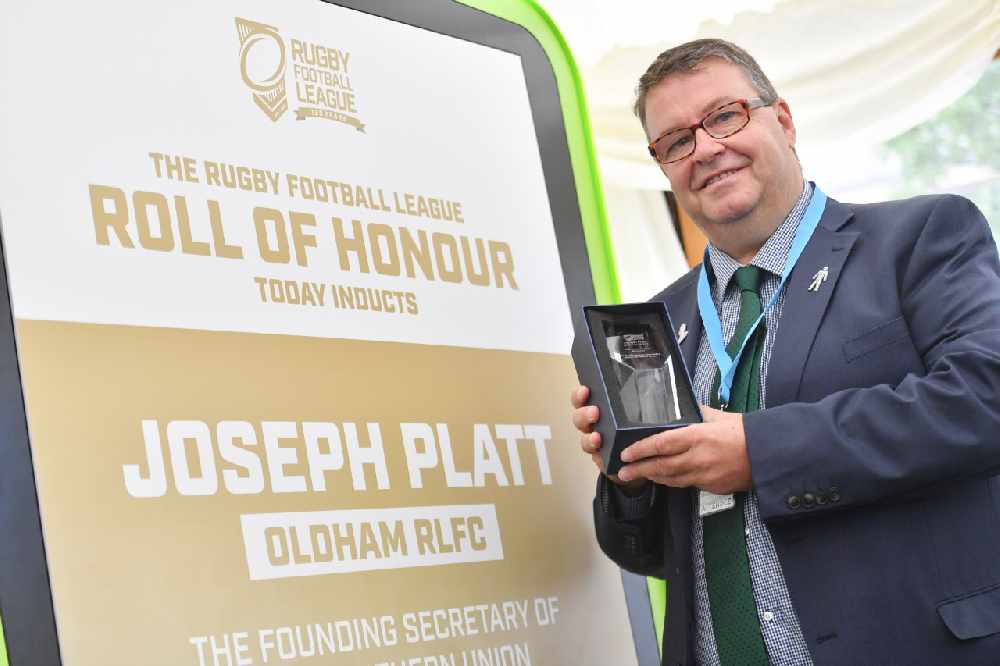 Oldham chairman Chris Hamilton (pictured) was a special guest of the Rugby Football League at a function in Huddersfield on Saturday to mark the sport's 125th birthday and to add Joseph Platt of Oldham, first secretary of the breakaway Northern Union in 1895, to Rugby League's Roll of Honour.

The rebel Northern Union split rugby and ultimately became the Rugby League in 1922.

Strict social-distancing guidelines were observed at Saturday's event which was attended by civic and RFL dignitaries, headed by Ralph Rimmer, the sport's chief executive.

Royton-born Joseph Platt, who is buried in Chadderton Cemetery, administered the breakaway organisation in its early years from his business offices in Queen Street, Oldham.

A blue plaque marks the building in Queen Street and describes the long-serving Oldham club official as "the father figure" of Rugby League.

Mr Hamilton said: "To think it was exactly 125 years ago that those club representatives took the decision that led to the birth of the game we know and love today as Rugby League is quite remarkable.

"Where would we have been today if that group of men hadn't made that historic decision?

"I am honoured and privileged to represent the town of Oldham and Oldham RLFC at this special occasion which recognises what Joseph Platt did for our sport in those early years. Without any shadow of doubt, he fully deserved his induction to the RFL's Roll of Honour."

Oldham was one of 22 clubs that broke ranks with the RFU establishment on August 29, 1895 with a unanimous vote at an historic meeting in the George Hotel, Huddersfield.

The rebel clubs wanted to pay players six shillings a week to compensate them for the wages they would lose from their full-time work by taking time off to play rugby.

The RFU dug in their heels and refused --- and as the 22 Northern clubs went their own way the 'new' brand of rugby was born.

As secretary of the new organisation from 1895 to 1920, local man Platt was a massive figure in its formative years. His is the first posthumous addition to Rugby League's Roll of Honour.