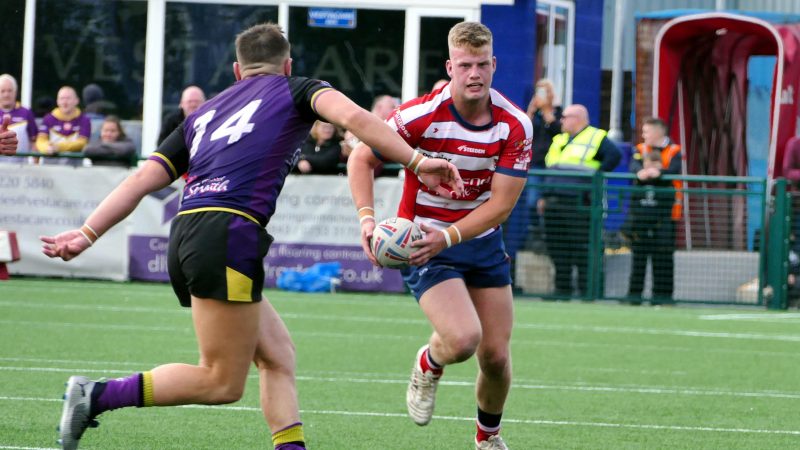 Jimmy Beckett, the young prop who has played on loan in four of Oldham's six games so far this season, has been recalled by his parent club Featherstone Rovers, making it all the more necessary for Roughyeds' to strengthen their forward pack as soon as possible. The search goes on.

The 20-year-old front-rower, who scored the Roughyeds' promotion-clinching try against Newcastle Thunder last season, was on the bench last Friday night when Featherstone beat Hunslet 46-6 in a Coral Challenge Cup fifth-round tie against Hunslet.

He arrived at Oldham at the end of January on a season-long loan with a recall clause which kicked in after a statutory 28 days and on the understanding that he wouldn't be required to play for Roughyeds in the Challenge Cup or the 1895 Cup.

The two Oldham games he missed were the Betfred League 1 fixture at Toulouse Olympique on February 8, when he was on weekend stand-by in his full-time day job, and the Coral Challenge Cup tie at Widnes on February 23.

A few days after that match his 28 days were up and Rovers were able to call him back as and when they needed him.

He was still with Roughyeds against Bradford Bulls and Dewsbury Rams on March 1 and March 8, but he has now been recalled by Rovers because of their injuries and their appearance in the fifth round of the Challenge Cup.

Roughyeds had a blank weekend but they are back in action at Leigh Centurions on Saturday, March 21 (3pm) and then they return to Bower Fold against York City Knights on Sunday, March 29 (3pm).

Said coach Matt Diskin: "Losing Jimmy will hurt us because as we stand just now  we don't have the depth to compete in the Championship.

"We are weak in one or two areas and we are working hard all the time to bring people in, but it isn't easy to get the right men.

"There are a couple of names in the pipeline, but we've had carrots dangled in front of us and then taken away and it is proving very difficult indeed to get hold of anyone, although the search is going on all the time."

He said there was good news on the injury front concerning both Liam Bent and Jode Sheriffe.

Tackling-machine Bent has missed the last two games with a knee injury, but he has returned to training and is progressing well.

New-boy Sheriffe, an experienced prop, has still to make his debut after sustaining a knee injury in pre-season training. He has been waiting several weeks for an operation, but he should have a date soon.