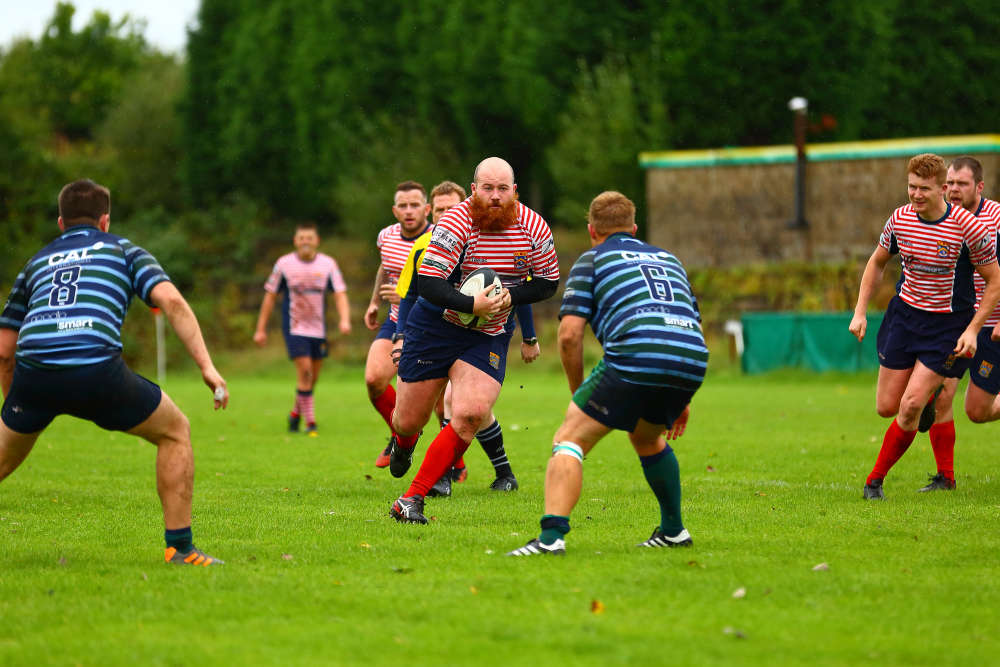 Ormskirk have had a difficult start to the season and for the first 10 minutes Oldham pounded their line and only a series of last ditch tackles kept them at bay. A try seemed certain to follow - and so it did - but not from Oldham-  from a line out on their five metre line Ormskirk bravely executed a lovely move to avoid the Oldham back men chasing up to prevent the expected kick, and set off downfield. At least three times the move seemed guaranteed to break down, but support was always on hand and 20 seconds later Ormskirk had scored one of the best tries seen on the ground for several seasons.

The weather didn't help flowing rugby and there were plenty of errors and a succession of scrums. For the next score Oldham had to wait until the 60th minute when Tom Davies, whose excellent kicking and running had helped Oldham have a big territorial advantage, made a half break, continued by Ryan Pickles and Lewis Townsend who neatly sidestepped the last defenders to score by the post. Jordan McEwan added the extras as a disconsolate Tom Davies left the field with a broken collarbone to become the seventh first-team squad member to suffer serious injury in training or a game since the season started. Alex Kurkiewicz, moved into the backrow from the wing and put in a strong performance and Phil Whitham joined the fray.

Shortly afterwards Jordan McEwan kicked an excellent 40 yard penalty to give Oldham some breathing space at 15-5 but the last 15 minutes saw Ormskirk constantly in the Oldham 20 and exerting pressure across the field as Oldham were grateful for a huge defensive effort from all the team with Louis Fitton, and second row paring off Nick Hackman and Nick Wright all stopping what seemed to be certain tries. Ormskirk were rewarded with a well-deserved bonus point when a finely struck penalty brought them back in contention but, fortunately, for a relieved Oldham, there was not enough time left for Ormskirk to attack again.

Another fine sporting contest played in the best spirit, but both sides seemed to lack the old wise head who could dictate on the field and execute a team game plan that would do justice to the huge efforts and commitment the players are putting in.