Oldham lose out in dying seconds 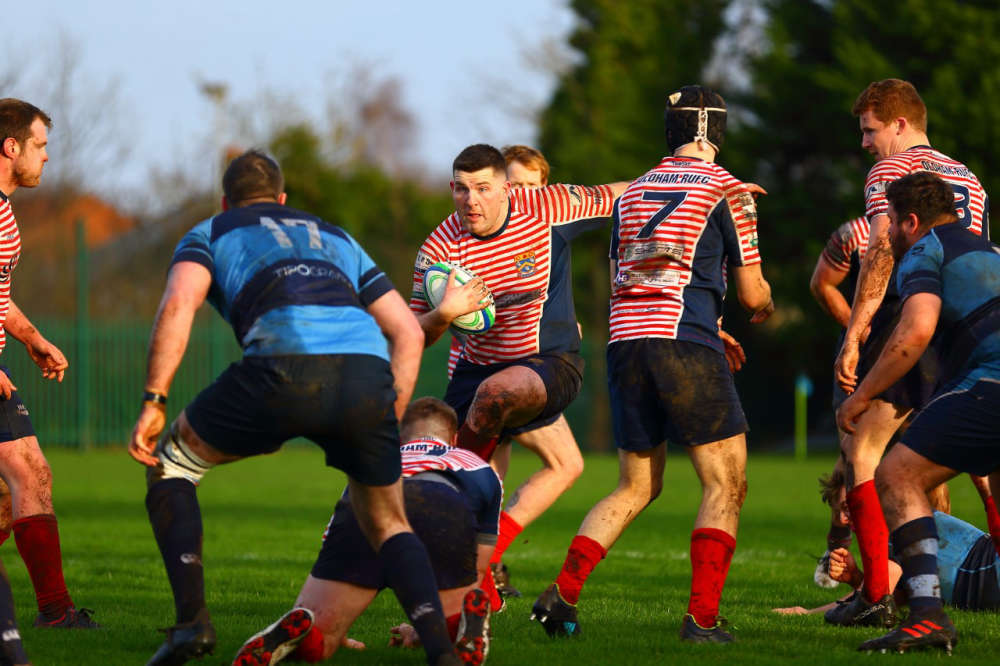 Oldham returned to action in 2022 with a trip to Liverpool Collegiate. A pitch inspection by the home club and some serious forking made sure the game went ahead.

Oldham earlier in the week had 22 players putting their hand up. By 14.15pm Oldham were down to 17 with Jack Sayle struggling with injury but putting his hand up to sit on the bench, whilst 18-year-old Marshall Yates was chomping at the bit to make his debut from the side line. A welcomed return of Tom Davies and Josh Watson bolstered the back line for the coach with Phil Whittam and Alexsander Kurkiewicz stepped up from the bench for the late cry offs.

The start of the first half was a bit of an arm wrestle with neither side setting the world on fire with their play but the first points came courtesy from a charge down from Collegiate of an Oldham clearance kick in their 22. The Collegiate backs were quicker to react and got to the ball first and with the conversion made took a 7-0 lead.

Oldham then managed to start firing and began to take control in the forwards. The coach had decided that Nick Hackman started at prop after some work on the machine at training in the week and this clearly paid off with the Oldham 8 moving the opposition back at every scrum. Three times the scrum collapsed to the line yet the referee awarded no yellow card. Oldham then breached the collegiate line with some good play from the pack on the floor with some nifty picking and going, which led to Ryan Pickles picking up and going through a number of the opposition to reach a long arm over the line. A missed conversion made it 7-5.

Collegiate at this stage we’re not offering a great deal up front but Oldham then gave a great offering to the opposition. A clearance kick from the collegiate 22 landed well into the Oldham half but the late tackle on the kicker gave Collegiate an easy 3 points. 10-5

Half time came with the game very much in the balance but Oldham would have the wind. The directions were simple. Play in the opposition half and force the mistakes. The returning Tom Davies showed what Oldham had been missing with two 50-20’s and generally moving Oldham well around the park. Oldham then took the lead when Tom Hannon carried a few opposition players over with him after again following great lead up play in the right from Oldham. Adam Takila was outstanding and all over the park all afternoon. Jordan McEwan added the extras for 10-12 in favour of Oldham.

Now was the time for Oldham to continue in what they were doing. Oldham returned down to the Collegiate 22 with Pickles ending short of the line with the ref then stopping play mid flow. For what no one knew. Rob Froggatt then made a trademark run and went over. It was then due to be a scrum but the referee gave a penalty for some form of indiscretion and collegiate cleared their lines. Marshall Yates then came on for his debut to give Tom Hannon a well-earned rest and the next ten minutes a bit messy for both teams. The last five minutes then became nip and tuck with Collegiate forcing an error from an Oldham ruck and kicked the ball up field. A few minutes later from a scrum collegiate kicked through and Oldham picked up on their 22 to secure the ball. From the ruck where Oldham took it in and with two Collegiate players playing it on the ground the referee blew his whistle. Surely a penalty to Oldham. No penalty for Collegiate for holding on.

Needless to say with the referee then saying 30 seconds to go the Collegiate standoff stepped up and managed to kick the penalty,13-12. With seconds left Oldham couldn’t retrieve the ball and the referee blew the final whistle