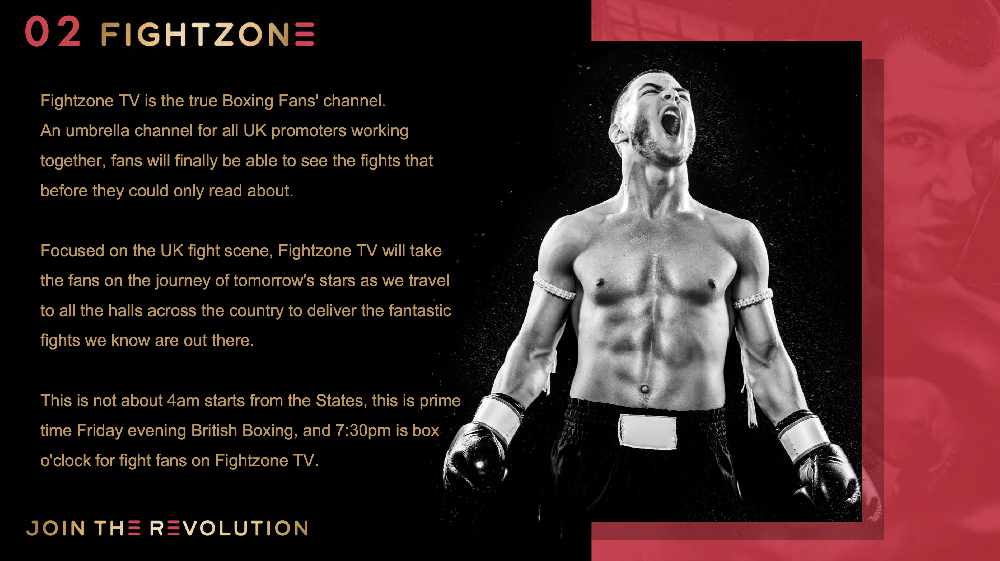 Almost a week to the day when the European Super League suffered a huge KO from football fans, a new channel for boxing fans has been announced.

Fightzone TV is the true boxing fans channel and is set to give the fans exactly what they’ve been asking for; great fights, rising stars and talent from across the UK and throughout the world that, to date, they have only read about.

The great news for fight fans is that there are no 4am starts from the US. Fightzone TV will deliver prime time Friday evening boxing with 7:30 pm being the time we will all get to know as ‘BOX O’CLOCK’ and it’s every Friday, every week throughout the year.

Fightzone TV is the revolution fight fans across the world have been waiting for. The Channel embraces new technology for a new era in boxing and the people behind this new venture are urging fans to go to www.fightzone.uk to join the revolution.

Commenting, the General Manager of Fightzone TV, Jim McMunn said; “Our commitment is to deliver 50 events per year, 200 live fights, and give exposure to over 250 boxers, all on one platform for just £4.99 per month. We believe that Fightzone TV will become the People’s Champion of boxing, delivering first class events, showcasing new talent and delivering an affordable place to watch the sport that fight fans love.”

Phil Smith, Head of Operations and Media for Fightzone TV, added: “Fightzone TV is set to revolutionise boxing viewing for fans - bringing coverage of live fights via the internet, but with the high production quality of TV. We are not an internet TV channel, but we are a TV channel on the internet, and for boxing fans.”

Fightzone TV officially launches on Friday 30th April, with the first event taking place on Friday 21st May which will be announced very soon.