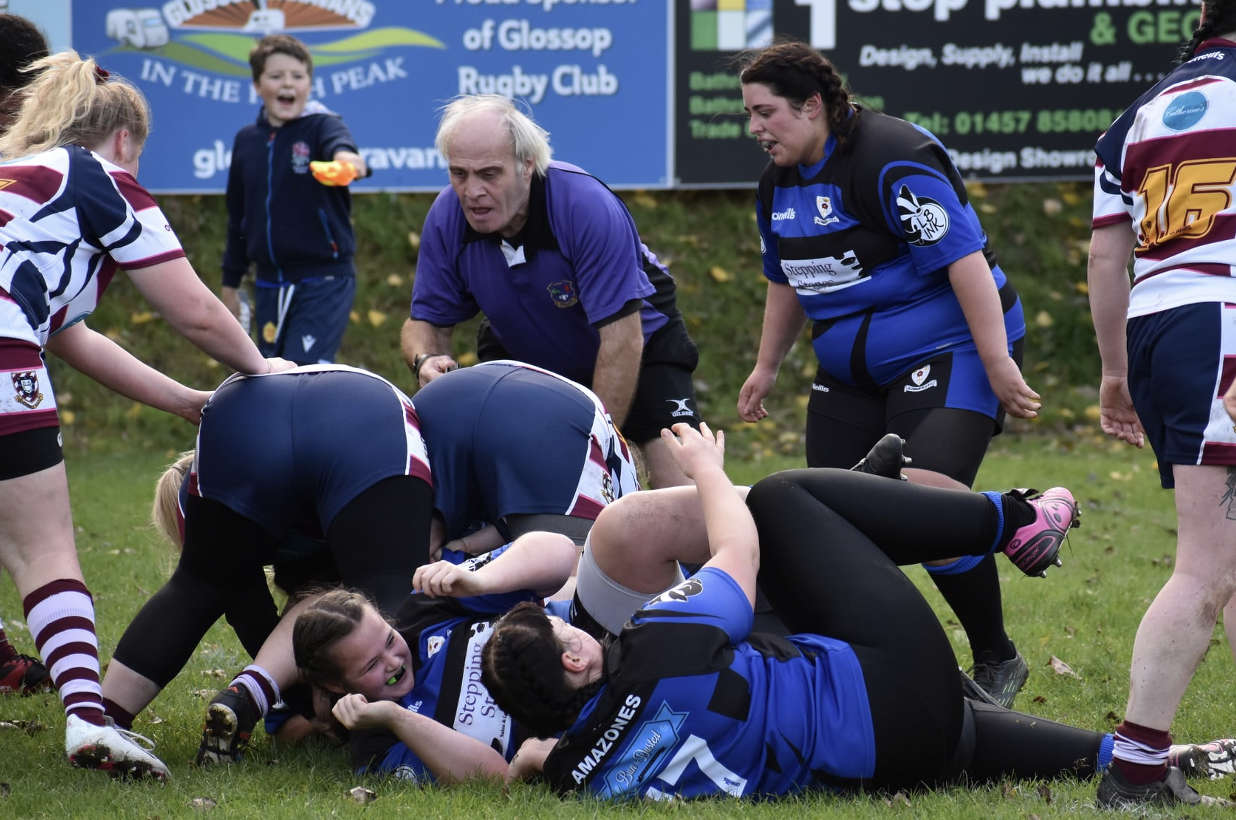 It’s taken some time, no thanks to Covid but the Amazones are back and playing. It’s a new season, a new league and a lot of new players.

The league is an Inner Warrior League aimed at Women’s rugby for new and developing teams to compete in to give them the chance to get the most out of the sport and play on even terms.

Glossop had their first match playing a competitive 12 aside game. Rochdale travelled to Hargate Hill, the sun was shining and a good crowd had turned out. It was a nervous start from both sides but the game soon came to life with lots of action in the break down, some good handling and mini breaks from both teams.

It was nip and tuck for the first twenty then Glossop started to get the upper hand pushing Rochdale back towards their line until a nice bit of interaction between the Glossop 9 and 10 saw some nifty footwork and the Captain, Fiona Armstrong sprinted over the line touching down under the posts for the first try of the match. Converted by Taylor Allen giving Glossop a well deserved 7-0 lead.

It wasn’t long before Rochdale had their chance and managed to stretch the Glossop defence by scoring in the corner. With a very good conversion from a difficult angle the scores were all square 7-7 before a much needed half time whistle.

The second half saw a lot more of the same rugby with powerful forward drives, good handling and mini breaks from the centres and wings on both teams. Rochdale benefited from having already had a couple of warm up games with some younger players out wide and they manged to stretch the otherwise solid Amazones defense by scoring again. Another very good conversion put the score at 7-14.

Amazones soon got another score on the board with a high level of forward pressure driving over the line in front of the club house to the cheers of jubilant home crowd. Laura Edwards coming up for air with ball in hand to claim the score, conversion missed, 12-14. Rochdale wasted no time in responding and stretching a now tiring Amazones side, scored a third converted try 12-21.

Both teams were out of substitutes as a few injuries had occurred but they battled on for another 15 minutes with plenty of opportunities for scores to happen, but with gritty defensive diaplays from both sides, especially from Rochdale who held up the Amazones and prevented them from going over the line for nearly five minutes of intense play. The final whistle was blown and the score 12-21 for Rochdale.

The Amazons held their heads high as they played extremely well, especially as eight made their debut match for the team and four were playing their first match ever. The team has made great strides over lock down recruiting new players and they are building in to a formidable team. The only way is up and with the dedication and commitment the Ladies showed in the match and the training leading up to it we believe they will have a great season ahead of them.