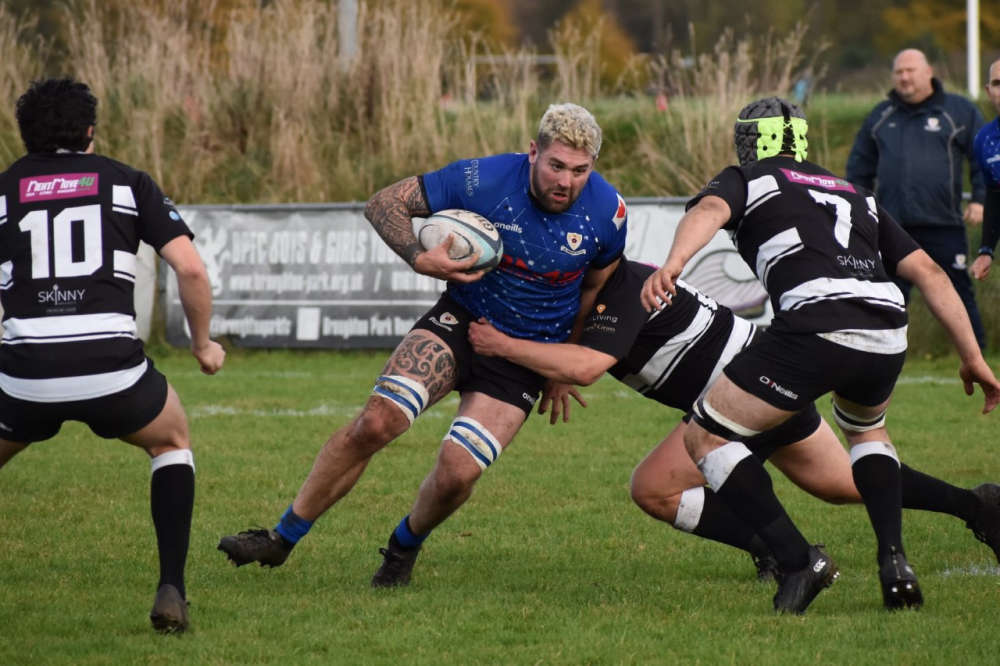 Hough End, the home of Broughton Park, hasn’t been a happy hunting ground for Glossop historically, with a number of visits in recent years proving fruitless.  However, on Saturday The Hillmen got this monkey off their back, when a late try from Kieran Wain sealed an important victory.

Leading into the game Glossop were forced into numerous changes, with no less than eight first team regulars absent. However, this gave opportunity for two products of Glossop’s junior section to make their first team debut, with Cole Johnston and Mario Kitromilides both impacting from the bench.

The game kicked off in near perfect conditions and it was the visitors who had the better of the opening exchanges. It took just four minutes for Rob Sonczak to settle the nerves and give Glossop a 0-3 lead with a well struck penalty.

From the restart, Glossop again took the initiative and soon they were pressurising the home defence. A number of penalties gave The Hillmen good field position and several forward drives were halted illegally by the home pack. In the eleventh minute, the referee had seen enough and Broughton Park were reduced to 14 men when their second row Steven Edgar was yellow carded.

As the pressure mounted, a Glossop try looked imminent but the ball was spilled close to the posts allowing Broughton Park to regroup. Their respite was brief however and on 15 minutes Glossop won another penalty which was calmly dispatched by Sonczak to double Glossop’s lead at 0-6.

For the remainder of the half the hosts enjoyed some good spells of possession and territory, probing at the Glossop defence and keeping the visitors pinned back well. They were unable to breach the try line but were rewarded with a penalty on the half hour following a ruck infringement to half the Glossop lead. This would conclude the first half scoring and the teams turned round at 3-6.

As in the first half, Glossop started positively with an early penalty converted by Rob Sonczak to give The Hillmen a 3-9 lead.

This was short-lived however and just five minutes later Broughton Park took the lead for the first time in the game. A penalty on the Glossop ‘22 was taken quickly by their lively scrum half Hodkinson, who caught the Glossop defence napping and darted over for a try which was converted. Broughton Park now led 10-9 and it was very much game on.

For the majority of the remainder of the half, play was kept to the middle third of the pitch with neither team creating scoring opportunities. Broughton park did have an opportunity to increase their lead via a penalty on 73 minutes but to the Hillmen’s relief the ball fell off the kicking tee and the rushed attempt at a drop kick was unsuccessful.

Heading into the final few minutes, Glossop threw all they had at the home team, building pressure just inside the Broughton Park half.

The ball was shifted to the right wing where Max Horsfall was found in space. He beat two defenders and looked to be on his way to scoring the winning try, only to be stopped five metres short, with a fantastic last ditch tap tackle.

However, the breakthrough came in the next phase of play, as the scrambling home defence couldn’t get organised in time to stop Number 8 Kieran Wain from charging over close to the posts. Sonczak nudged over the conversion and from then on, Glossop were able to run down the clock to seal an important victory on the road. The win sees Glossop maintain fourth spot in “North 1 West” after nine games.