Tameside Netball Club’s Hannah Williams says she feels incredibly proud to have captained the England Under 21 squad to the European title.

Hannah, who also represents Manchester Thunder, was part of a 12-strong squad that competed in a three game series against Norrthern Ireland, Wales and Scotland at the University of Worcester Arena.

Coached by Karen Greig, England began their title defence on Friday with an 83-20 victory over Northern Ireland. The hosts got off to a perfect start thanks to key contributions from Williams and Alicia Scholes – daughter of Manchester United legend Paul – as well as strong defensive pressure from Funmi Fadoiu and goalkeeper Alice Harvey. England found themselves 44-9 ahead at the half-time whistle and maintained their form with an excellent display in the final quarter to win comfortably. 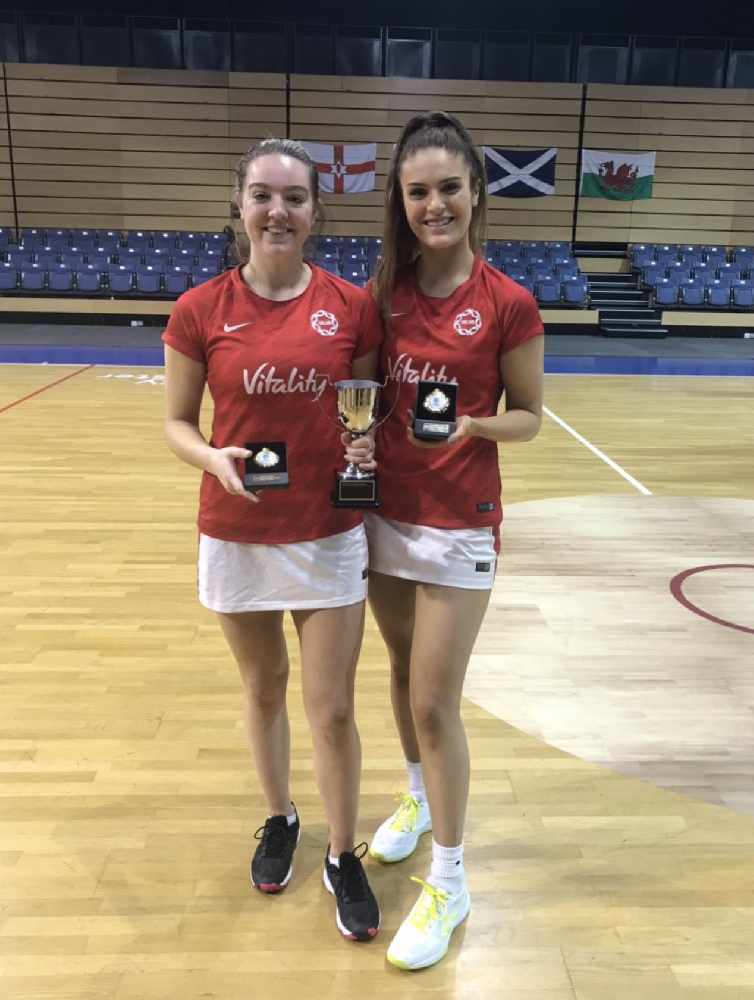 England were back in action 24 hours later and faced a Wales side who edged their way to victory over Scotland on Friday. Despite a battling performance from Wales, England’s quality across the court proved to be the difference and they secured back-to-back victories with a 56-28 win.

And the Red Roses capped off a memorable tournament on the final day by beating Scotland 75-29 to retain their crown as European Champions. Wales secured a silver medal, while Scotland came third.

Hannah was joined by a few familiar faces on court, with fellow Manchester Thunder players Grace Mills (pictured with Hannah above) and Berri Neill also donning the red and white.

Following the tournament, Hannah said: “Being able to say you've won is one thing, but being able to say you were captain still feels a bit strange, as I'm used to it being someone else. It's not until you're given that role you realise how rare and special it is. It was definitely a huge milestone for me putting the dress back on for the first time since my injury. So to win and be captain was my dream return."

Having gained valuable experience at U21 level, Hannah has set her sights on forcing her way into the senior side in the future. "At the moment the aim is to really focus on each season as it comes, especially as I’ve learnt that a whole season of netball can be taken away from you in a few moments. But to be the seniors' captain would definitely be the epitome!"

She added: "I just want to say a massive thank you to all four countries that have come. All four teams have put on a massive display of netball. There are a lot of new girls in the dress so well done to all the girls that have played.”

Meanwhile, Greig told Netball England's official website: “We’ve had a tough few days but we’ve managed to get all 12 players out on court across the whole tournament.

“For us, this is just the start of our preperations building towards the Netball World Youth Cup in 2021, so the fact we’ve been able to expose so many athlete this weekend Is a really good start and a good benchmark for us moving forward.”