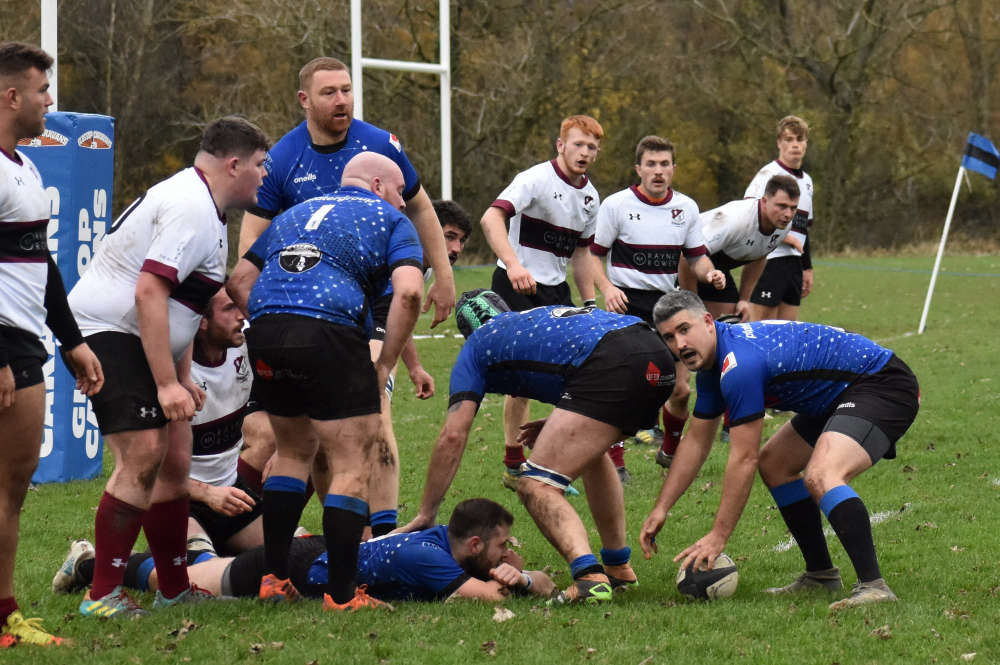 Glossop propelled themselves to third place in the league with a comprehensive bonus point win over rivals Bowdon.

The early signs were ominous for Glossop, when centre Lewis Winterbottom was shown a straight red card after just five minutes, leaving them a man down for the majority of the game. However, The Hillmen reacted very well and eventually were able to pull away from their Cheshire opponents in the second half.  Credit should go to full back Rob Sonczak and brother Chris on the wing, who marshalled the backfield and covered well given the numerical advantage held by Bowdon.

The opening quarter of the game saw both teams unable to break the deadlock, with Bowdon unsurprisingly looking to kick in behind the Glossop backline, moving the ball wide early in an attempt to find space. Conversely, Glossop had the edge in the forwards and were happy to play to their strength in that department.

After 25 minutes Bowdon took a 0-3 lead via a well taken penalty.

Just five minutes later the hosts hit back and took the lead, with prop Callum Baines barging over for his first try of the season following a close quarters assault on the Bowdon line. Rob Sonczak nudged over the conversion, which would be the first of a faultless kicking display.

Bowdon reduced the deficit soon after with another successful penalty. This was followed up with a well taken try two minutes later, when they outnumbered Glossop on the short side and Michael Swetman crossed for an unconverted score. With a few minutes of the first half to play Bowdon led 7-11.

Glossop looked to see out the half and then regroup, however, they were gifted several penalties in succession which allowed them to pressurise the Bowdon line. Adam Mallinson, playing in the back row for Glossop, found some space on the right side of the pitch, where he was able to release Chris Sonczak, who darted over for a try in the corner. The conversion from Rob Sonczak saw Glossop carry an unlikely, but hard earned 14-11 lead into the second half.

After the interval, Glossop had the benefit of the breeze behind them and knew that territory would be key to keeping Bowdon at bay. For the most part The Hillmen did this well, and controlled play for long periods throughout the second half. The Glossop forwards began to turn the screw and as the Bowdon pack tired, Glossop were able to mount pressure, particularly in the scrum.

Ten minutes into the second half the Glossop lead was increased when fly half, Matt Sonczak stepped inside his opposite number to cross for a converted try, which gave the hosts a little breathing space at 21-11.

The visitors responded well, and when Sam Gibson was yellow carded, Glossop looked stretched in defence with only 13 men on the pitch. Bowdon soon delivered a reminder that they could be dangerous from anywhere on the pitch as they ran the ball the length of the field to score the best try of the day, finished off by Matthew Kilcourse.

Undeterred, Glossop stuck to their task, and a bonus point try came soon after. Throwing caution to the wind, Bowdon again looked to run the ball out of their own half but a long pass was well anticipated by Zak Round who intercepted and had just enough gas to reach the try line.

At 28-16, Glossop looked on course for an impressive win and a try in the closing stages from Dave Stanley following a strong scrum put the game to bed.

The conversion from the touchline was expertly judged by Rob Sonczak, and Glossop recorded an important win in very testing circumstances. Final Score 35 – 16.