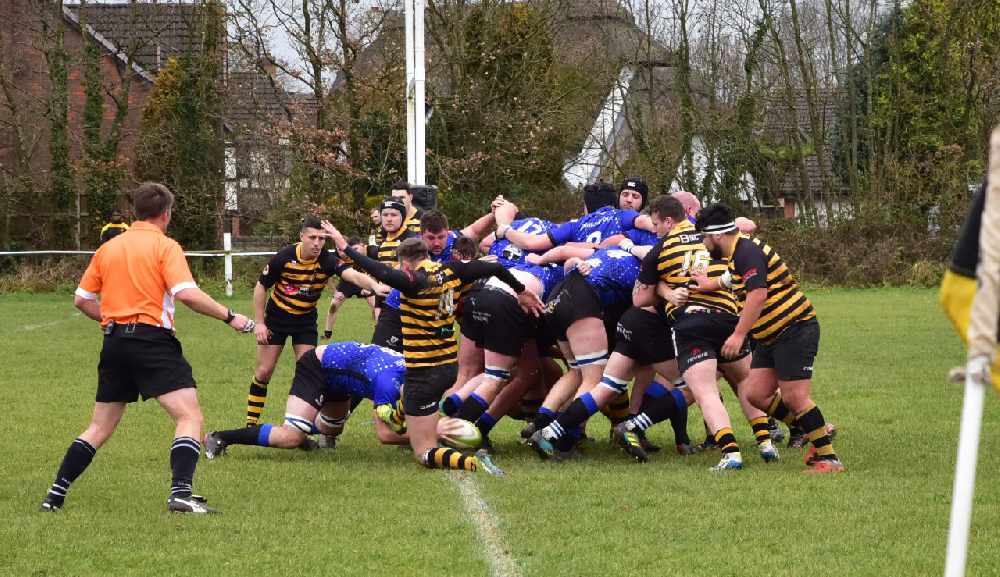 Glossop faced a tough away trip to Leigh on Saturday who, heading into the fixture, sat just three points behind the Hillmen in fourth place. A win for Leigh would have propelled them into third and so the importance of the game was not underestimated by either team.

Glossop were out of the blocks fast exerting early pressure on the Leigh line.

On eight minutes, Glossop thought they had broken through when scrum half Tennant snuck over from close range but the unsighted referee deemed the ball to have been spilled over the line.

However, Glossop kept the pressure on and were soon rewarded when a powerful scrum from five metres out was driven over the line for Dave Stanley to score an unconverted try on twelve minutes.

Eight minutes later, Rob Sonczak kicked a penalty to increase the Glossop lead to eight points. This was short lived, however, as Leigh hit back with a try from Eliot Liku after a quickly taken penalty caught Glossop napping. Both teams fought hard for the remainder of the half but the defence of both teams was on form. A good break by Glossop centre Greg Moran saw him almost put Chris Sonczak away for a certain try down the right flank, only for the final pass to go to ground.

The teams turned around with Glossop holding a slender 5-8 lead and the game very much in the balance.

After half time, the teams exchanged penalties but, as in the first half, were struggling to breach each other’s defence.

It took until the seventieth minute for Leigh  to break the deadlock, when replacement back row Onasanya scored a great individual try to give the hosts the lead for the first time in the game at 15-11.

Glossop needed a response and it came almost immediately, when good hands down the back line saw Matt Sonczak finish well in the right corner to put Glossop back in the lead at 15-16.

Heading into a very tense final few minutes, Leigh had an opportunity to regain the lead with a long range penalty. Fortunately for the Hillmen the ball bounced back off the upright and, although Leigh regained possession from here, the Glossop defence scrambled into position and managed to keep Leigh at bay.

In the final minute, Glossop took the game beyond doubt when from another five metre scrum, Stanley fought his way over the line for his second try to stretch the lead to 15-21.